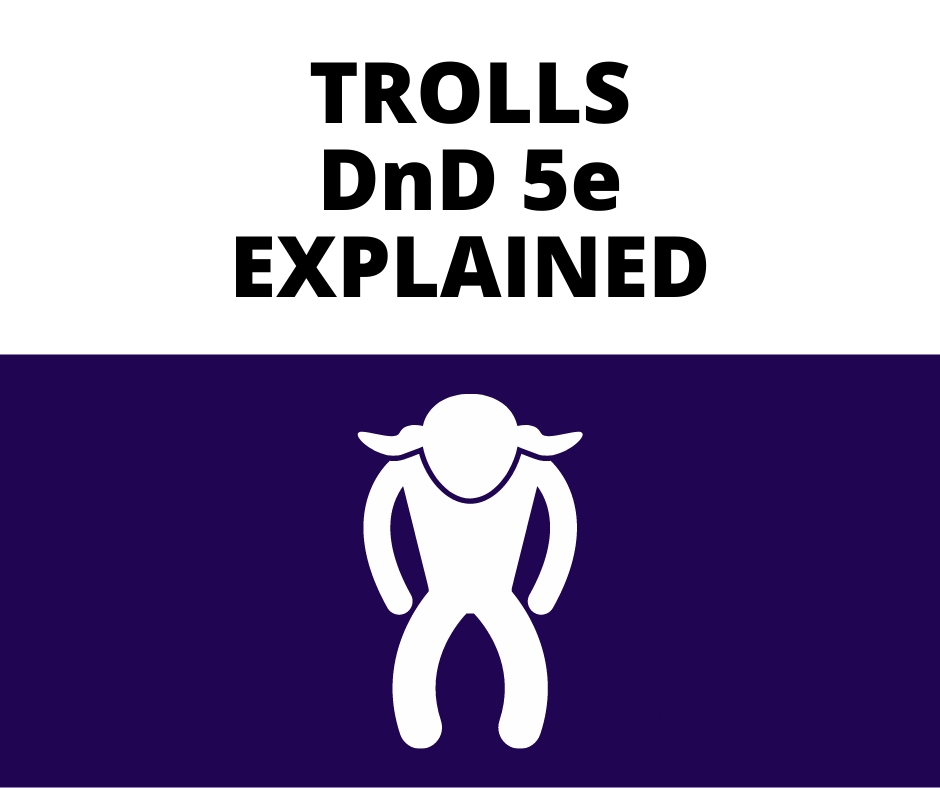 Make sure you have a flamethrower ready as we dive into today’s post on Trolls!

In DnD 5e Trolls are creatures around that would be thrown at players around levels 3-5. Although in the right circumstances can be used at any level. They have a pretty large HP pool, but a low AC to compensate. They can take A LOT of punishment due to their other abilities. They can smell extremely well, so can actually track other creatures about as well as a dog could.

However, their most unique ability and the one that makes them scariest in my opinion? Their Regeneration ability. As their stat block says, unless they take acid or fire damage, the troll regains 10HP at the start of its turns. It also states that a troll can only die if it starts its turn with 0HP AND cannot regenerate.

Now, this is pretty intense, since a party might not know or be capable of dealing with either damage types. Meaning that the creature is undoing 10 points of damage each round, and there is the potential that it cannot be killed unless subjected to one of those types of damage.

The stats also mention that the creature can lose digits, limbs, and even its head, and continue on. Which could lead to a lot of hilarious scenarios, where the party believes they have killed it and take its head for bounty, only to find the head is still very much alive and the body they left behind is slowly regenerating.

Its attacks are pretty standard for a creature of its CR. It can make 3 attacks, 1 bite, and 2 claw attacks. Fairly standard damage at 1d6+4 and 2d6+4 respectively. No real hidden surprises here.

The last thing their entry in the monster manual mentions that is of note is that due to their regenerative properties, the Troll can mutate. It gives examples of a troll that eats Fey creatures, saying it could end up taking on Fey-like properties, or a decapitated troll might regenerate two heads. Really what they’re doing is giving carte blanche to be creative with trolls, make them unique to themselves.

How to use Trolls?

As mentioned you’d likely only see these in the upper-lower to middling levels of DnD. Being CR5 the troll can be a very tough fight, especially if accompanied by other foes or by other trolls. Due to their regeneration ability, dealing with multiple trolls would prove difficult for even an experienced party.

I also mentioned that they can mutate, this gives you a prebuilt reason to change how specific trolls work, maybe you want them to be able to attack more, so they have more arms, or they have been consuming magic users for some time and thus have access to certain arcane abilities. Realistically the choices there are only limited by your own imagination.

Outside of those two abilities, Trolls are pretty basic creatures. They’re typically pretty dumb, if they aren’t just wild then they likely serve another more powerful creature/being. Although if a group of trolls worked together as an evil mercenary band, then even if they are dumb, they could still be quite effective, especially if they can escape with their comrade’s bodies and allow them to regenerate.

How do you kill a troll in DnD 5e?

As mentioned in the post, a troll can typically only be killed if they take Fire or Acid damage before they can regenerate on their turn. However, a troll can still be killed by instant death mechanics as well such as Power Word: Kill as it bypasses the need to be at 0HP.

Are Trolls Vulnerable to Fire in DnD 5e?

Fire does no extra damage, but it does prevent their regeneration ability, so in a way they are.

Are Trolls Giants in DnD 5e?

They are classes as Giants, but within the lore of DnD, they share no relations to the true giants. If anything they are a very distant cousin to the giants.

As always I hope you learned a little about Trolls, I know I did. I’ll for sure be keeping these creatures in mind next time my party is the appropriate level to have these things be a threat. So until next time, I really hope your day is a critical success!