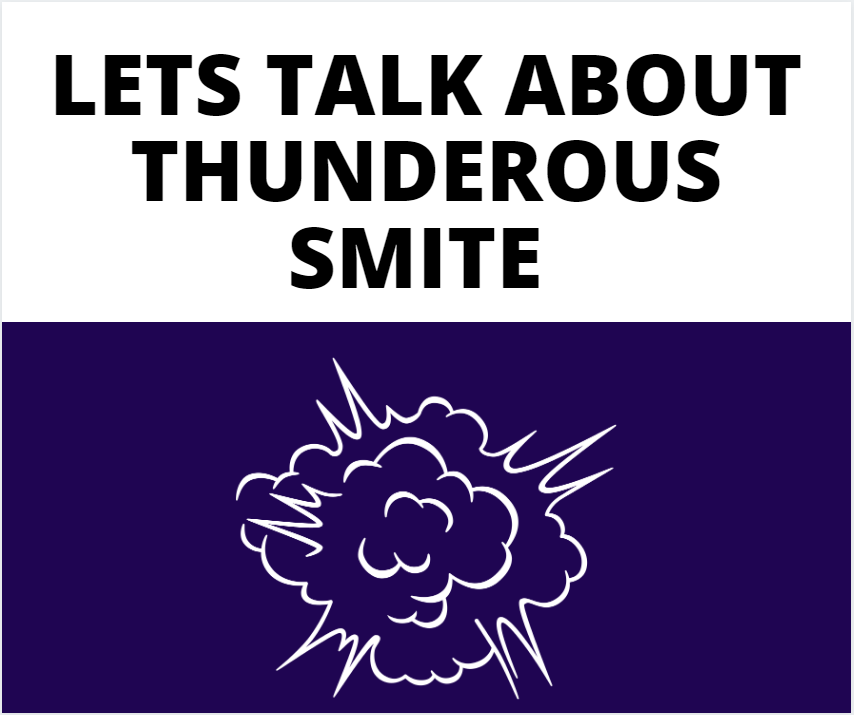 How’s it going, everyone? So in today’s post, Thunderous Smite in DnD 5e, we’re going to talk about a specific spell and give some insight into some of its intricacies.

It’s a spell that underlines what thunder damage is (check out our post on thunder damage). It’s also an early level spell with a bit of a drawback, in that when it’s used, it makes a sound that is very audible, so it can mess with being stealthy if used unwisely.

So without further ado, let’s tear right into this spell.

So as mentioned above, the spell is a paladin spell, there are other ways to acquire it for other types of casters, but primarily it’s a paladin spell. It’s also a 1st level spell, meaning it can be used very early on in the game.

Basically, it enchants the weapon of the caster so that their next hit deals extra thunder damage and also causes the target to have to make a Str saving throw (read more about saving throws here) or be knocked prone.

If the hit is successful, the caster deals an extra 2d6 thunder damage on top of the damage the weapon that has been enchanted does. The spell is also a bonus action, which means it can be used on the same turn the attack takes place.

The main reason for this post is two-fold, one being the spell being one of the few pure thunder damage spells, and the other being the added effect the spell has when it hits successfully. This effect underlines that thunder damage is considered to be like a shockwave.

The effect of which I’m speaking about is that when a target is hit by a weapon enchanted by this spell, the weapon lets out a crack of thunder, which is audible within 300ft of the attack. Personally, I think a lot of people end up describing this as a bolt of lightning, but if you think about it like the scene from Avengers where Thor hits Captain America’s shield, and that shockwave is sent out, it’s more like that.

Since we’re discussing a specific spell, let’s go into how I would describe it to try and paint a word picture for my players. So let’s say Henry the Paladin is fighting a risen skeleton and has decided to use Thunderous Smite and blow the skeleton away.

Henry sees the last skeleton the necromancer raised in order to create a distraction so he could flee. Henry covered in blood from the last few hits from previous skeletons, places his hand over his Warhammer, and invokes his God’s name “Pelor grant me strength!” he shouts, as he rushes the skeleton. The weapon gleams and hums as he raises it in the air and strikes true on the skeleton’s bony head. As the hammer hits, an audible CRACK of thunder blasts out within the tomb, a visible shockwave shoots out from where the head of the skeleton once was, and the rest of the party shield their faces from the fragments of bone that are thrown around the room. Henry looks to them, cracks a big smile, and gives them a thumbs up

As always I hope this post helped you understand Thunderous Smite a little more. Again reaffirming the differences between thunder damage and lightning damage (which you can read more about here). So thanks for taking the time to have a read through this post and until next time, may your day be a critical success!