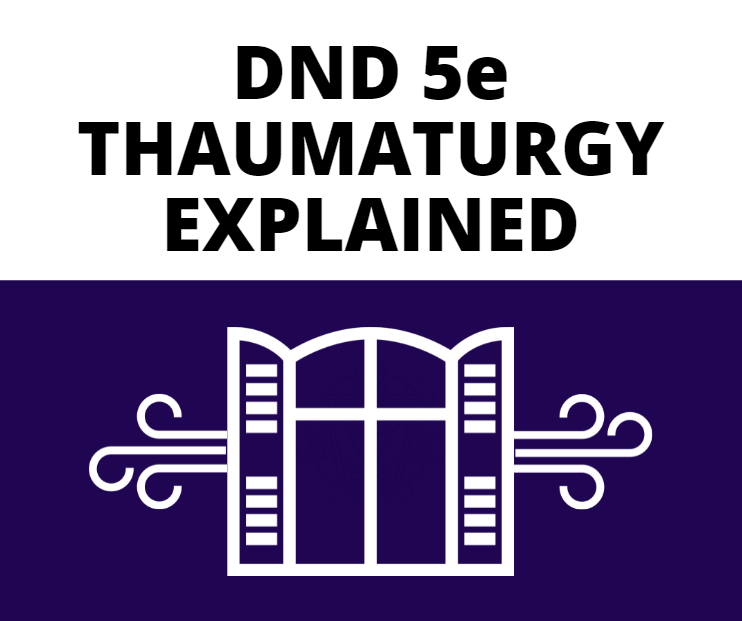 Hey folks! Hope y’all had a good weekend. So today’s post will be, Thaumaturgy DnD 5e. This flavourful cantrip can add a lot of flair to your characters.

First, we’ll go over how it works, then give an example plus flavor of it being used, then answer some questions on it.

So get comfy, and don’t worry about the loud noises or the windows rattling, and let’s dive into the post!

In DnD 5e Thaumaturgy is a cantrip spell, which means it can cast an unlimited amount of times each day. Each effect from this spell only lasts 1 min, and the spells has a 30-foot range.

It can only be used by clerics, or by those who have gained access to the cleric spells via feat or other methods.

It has a list of various effects, which you may only choose one of the effects for each casting of the spell, but since the spell is instant, and requires no concentration, you can cast the spells multiple times and have up to three of the effects active at the same time.

The effects are as follows

Now that we know what it does, how could one use the spell? Well, there are a few spells in DnD which are designed for pure theatrics, and using them creatively will allow for memorable moments and even situational bonuses.

One example that can be picked from popular culture, and one that most people would have seen is in Lord of The Rings.

Gandalf effectively uses a similar spell/trick when convincing Bilbo that he is not robbing him. The lights dim, and Gandalfs voice booms. Similarly, he does it when talking to the elves about the ring, the lights dim, and he shouts in the black tongue of Mordor, as thunder can be heard.

With this in mind, here’s a way I would describe it if it came up in a game of mine.

With the lowly thief tied to a chair in the basement, the Cleric is getting tired of the loyalty to a master the thief does not know the true origins of. The Cleric turns her back and takes a deep breath, the lights in the room darken till it seems they both exist in a void, the Cleric turns, eyes burning like the forges of the nine hells, her voice booms. “You do not know whom you truly serve, your master takes you for a fool, and it shows. You make petty coin while he conspires to enslave the land, to enslave the family YOU steal to provide for. Make your choice, live and see your family grow old, or die here and now protecting one who would not do the same for you.” The thief visibly shaking from this display breaks down and tells the Cleric everything he knows.

Is Thaumaturgy good in DnD 5e?

This question comes up for almost every mechanic/spell in DnD. The answer is typically similar across the board. It really depends on the situation. Since Thaumaturgy is a flavor spell, it exists to add style or flair to a situation, there is no REAL mechanical benefit to it.

However, as a GM, if a player used the spell creatively I would potentially give them advantage (or even inspiration) depending on the situation. I feel that this encourages creative use of these spells.

Can Thaumaturgy put out flames in DnD 5e?

I would say no to this. The spell states it can dim flames, but not extinguish them.

Can Bards use Thaumaturgy in DnD 5e?

By default, no, they cannot. However, any character that takes the Magic Initiate Feat can learn 2 cantrips from any of the other classes’ spell lists. So if using that, they can.

Can you use Thaumaturgy to throw your voice in DnD 5e?

This is one of these situations where, in my opinion, it is really up to the GM. I would say no, you cannot. The spell states that the sound is an instantaneous sound, not something continuous like a sentence.

That being said, you could use to shout something very quick, like “Over here!” but you couldn’t for instance, talk to someone across a crowded room with it.

That’s it for Thaumaturgy. I do enjoy the flavor spells in DnD 5e, I find it can really add to the moments we share in our collective imagination when playing the game.

As always, I hope you enjoyed the post and answered any questions that might come up on this topic. Until next time, may your day be a Critical Success!