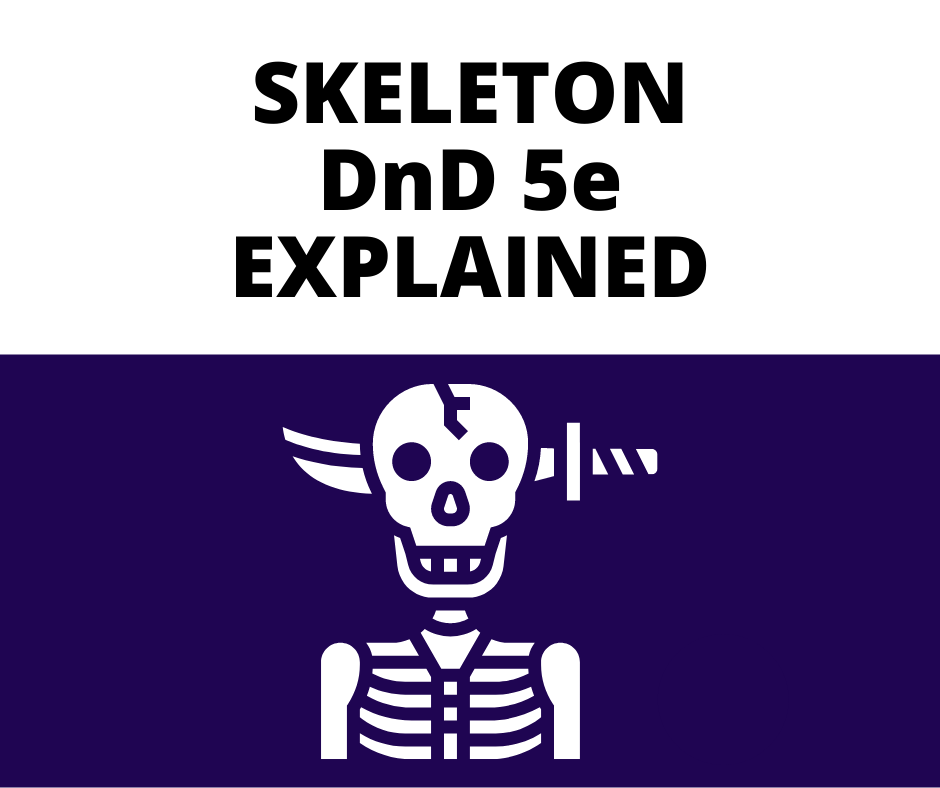 Hey folks! In today’s post, Skeleton DnD 5e Explained, I’m going to cover this humble creature. First I’ll go over what it is, what it can do, how to use it, and finally answer questions surrounding the creature.

So make sure you nail those coffins tight and let’s dive right into today’s post!

In DnD 5e when people typically talk about Skeletons they’re talking about the undead variety. These creatures are raised from their eternal slumber usually by necromancers but they can be brought back by many sources of dark magic.

They are generally used as mindless servants, either protecting a master, their master’s belongings, or they are guarding the area in which they rest.

There are a number of skeletons within the books for example the regular Skeleton, the Minotaur Skeleton, and the Warhorse Skeleton. However, basically, anything with a bone structure can be brought back as a skeleton, so don’t feel restrained by just what’s in the book.

What can Skeletons do?

Skeletons are about as special as you decide to make them. They have pretty typical low stats by default. Low AC and HP. They have pretty standard attacks as well 1d6+2 on a shortsword attack and the same on short bow.

They are actually vulnerable to bludgeoning damage which means when they are attacked by an appropriate weapon they take double damage. They are immune to poisoned damage and they are immune to the exhausted and poisoned conditions. They also possess decent darkvision.

The Minotaur Skeletons are a bit beefier, dealing 2d12+4 with their great axe, or 2d8+4 by goring their target. They also have the ability to charge, which means if it moves 10ft straight towards a target it can impose a Str Save on the target, if they fail the target takes 2d8 piercing damage.

The Warhorse Skeleton is mainly just a flavor thing; it has no real special attacks or abilities.

How to use Skeletons

That’s the great thing about Skeletons, they are simple to use, and they can be pretty much anywhere adventurers might want to go. Caves, tombs, and dungeons are all prime locations for the undead.

Keep in mind they’re typically mindless servants, although there’s no reason you couldn’t have a more sentient Skeleton in your games.

I’d say when using regular skeletons, that using a lot of them can go a long way to show just how infested an area might be with undead. They are a good measure (them and zombies) of how desecrated an area might actually be.

Can You Be a Skeleton in DnD 5e?

Not officially no. However, if I was the GM, I’d just tell my player to take the same stats for whatever their skeleton used to be before it was a skeleton. It’d be more of a flavor thing.

Are Skeletons Creatures in DnD 5e?

Yeah, everything that can move on its own is a creature in DnD.

Can Skeletons Talk in DnD 5e?

They can but seldom do. They can speak the languages they knew in their previous life.

Do Skeletons have Dark Vison in DnD 5e?

The humble Skeleton is a staple creature, often forgotten about in the iconography of DnD, but these creatures are the backbone of many dungeons and crypts. So keep them in mind while they’re mindlessly protecting your treasure.

So as always I hope you learned about the Skeleton and until next time, may your day be a critical success!