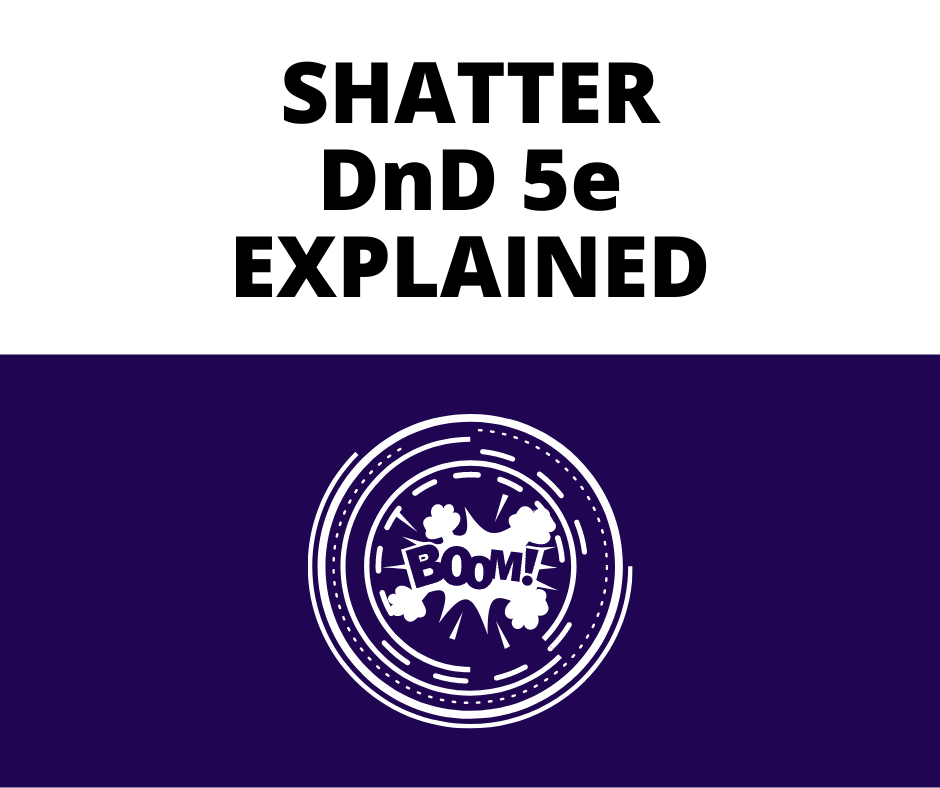 Happy new week folks! In today’s post, Shatter DnD 5e Explained, I’ll be going over this booming spell. First I’ll go over what the spell is, and then how to use it, then answer some of the questions surrounding this spell.

So get strapped in and get ready to be blown away as we jump right into this post!

Shatter is a 2nd level evocation spell, it costs 1 action to cast, and can be cast up to 60 feet away. Typically, only Bards, Sorcerers, Warlocks, and Wizards have access to it. It’s one of the early AoE (Area of Effect) spells so it can be pretty useful to pick up if you’re able.

When the spell is cast each creature (allies too) in the 10-foot radius of the spell is forced to make a Con Save. If they fail, the creature takes 3d8 Thunder Damage.  An interesting thing about Shatter is that if a creature is made of non-living matter, like stone or metal, then they have disadvantage. Objects that aren’t carried or worn can also be damaged by the spell, so in theory, one could burst open a locked door with the spell.

How to use Shatter

Since it’s a low-level AoE spell it can be super useful again groups of enemies, since its damage is 3d8 it can pack a decent punch across a group. So I’d for sure recommend using in those scenarios. I’d say as long as you can catch at the very least 2 enemies in the spell, that’s some decent damage spread across them.

Be aware that this spell can also damage allies if they are caught within the area when the spell is cast. So make you place the spell appropriately to minimize friendly fire.

One thing that’s mentioned at the end of the spell, is that it can damage objects that aren’t worn or carried by a creature. This means it can be used to blow open doors, weak floors, and even potentially cause cave-ins. So keep in mind as a GM that the spell damages objects, it could lead to some interesting twists within a dungeon/cave/building, having the floor give out, or having a cave start to collapse could be a fun and memorable moment from the game.

Is Shatter good in 5e?

This is an odd one to answer, but personally, I think the spell is decent. It can be a good source of damage vs constructs since they are typically made out of inorganic material. Also for breaking open doors.

Can Shatter break walls in 5e?

I would say yes it can. However, there is a small caveat. It doesn’t do THAT much damage, so sturdy walls and doors would likely not be broken in just one cast, it may require multiple casts to break down a wall or sturdy door.

Does Shatter affect Warforged in 5e?

It does if they are made of non-living material. Which I’d say almost all Warforged are.

Shatter is a decent little spell that you get early on and in those early stages it can come in quite useful. However, it does fall off very quickly, so it may not be worth taking if you’re a big picture kind of spellcaster as it may be seen as a waste of a known spell.

As always I hope you learned a little about the spell and until next time, may your day be a critical success!