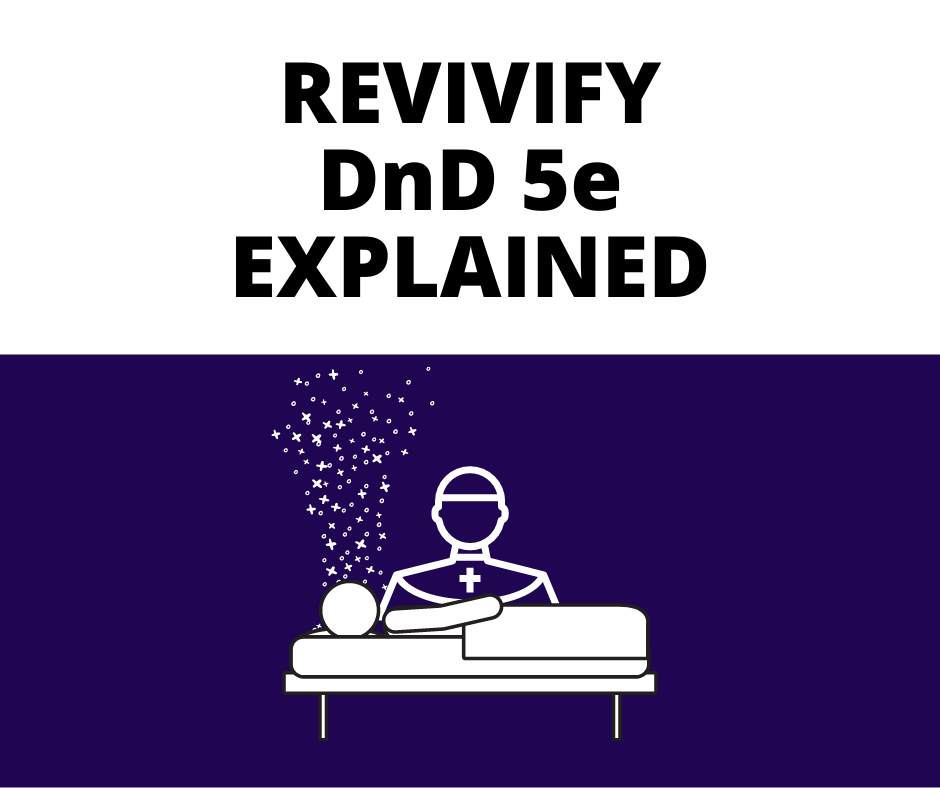 Hey folks, hope y’all had a good weekend! In today’s post, Revivify DnD 5e, I’ll be covering this spell which will save your bacon more than once when things get hairy. First I’ll cover what it is, then how to use it, and finally, I’ll answer some of your questions on the spell.

So strap in, and get ready to be brought back to the land of the living as we dive into this post!

Revivify is one of the few spells that can bring someone back from the dead. So it is an amazing tool in your arsenal as an adventurer if you have access to it.

It’s a 3rd level necromancy spell, only usable by Clerics and Paladins. It’s a fairly simple spell in concept. You touch someone or something that has been dead for up to a minute (so you gotta act quick!) and you can bring them back to the land of the living with 1 HP.

One big thing to remember is that it requires the caster to have a bunch (or just one) of diamonds, the value of the diamonds needs to be at least 300 gold. So having 10 diamonds worth 30 gold each would be fine.

How to use Revivify?

In its most basic form, as long as the caster has the diamonds, touches the body, and casts the spell the creature will come back to life. However, I don’t like the thought of coming back to life to be THAT easy.

So what I do is, when a creature is being brought back to life by a caster, a ritual is started to revive the creature, the ritual functions similar to the death saving throws mechanic. (just for transparency I’m sure I stole this from Critical Role, but I’m sure Matt got the idea from previous versions of the game).

What that means is that the caster starts the ritual, and anyone can join in to assist, but you have to almost bargain with death/the soul of the departed. In my worlds a soul must be persuaded to come back to the land of the living. So then each time someone does something to affect the ritual they roll a d20.

You as the GM decide in your head how difficult the action another creature is taking would be. So for instance, one of my players had a friendly bet going on with another player for a couple hundred gold. When that character died, he placed the couple hundred gold nearby the body and told him that he had won. So I said that would be around a 10-12 DC on the D20 roll they make. I always lower it if the player has something particularly creative or relevant to both characters’ current stories of backstories.

Once up to 3 assists have been made, that ultimately determines what DC the final roll you will make as the GM will be. So at first, the DC is 10, which goes up every time that character has been successfully resurrected. It goes down by 3 for each successful assistance with the ritual and goes up by 1 for each failed assistance with the ritual. The GM then rolls the final check to see if the soul is lost, or if they come back to their body.

Who can use Revivify in 5e?

Both Clerics and Paladins can use Revivify. However, Clerics get access to it sooner than Paladins.

What level is Revivify in 5e?

Do Paladins get Revivify in 5e?

Yep, they gain access to it at 9th level.

Does Revivify consume diamonds in 5e?

Sure does, it mentions so in the spell description that it consumes the diamonds used.

I love resurrection in DnD, but I find that at its base it’s too easy to access. So I like making it feel more epic to bring a soul back to a body, but not have to spend a whole side quest. So I think the ritual thing is a good middle ground.

As always I hope you learned a little more about this spell, and the mechanics that can surround it. I would highly recommend adopting the Alternate Resurrection rules I mentioned. So until next time, may your day be a Critical Success!