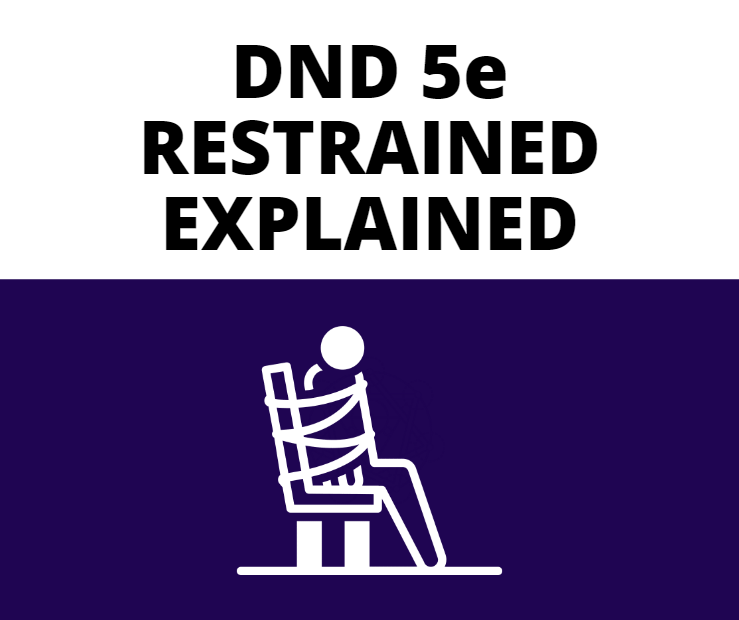 Good evening everybody, today’s post will be, Restrained DnD 5e. This comes up quite often in DnD so it’s good for it to have its own dedicated post.

First, we’ll go over what it means to be restrained in DnD and then we’ll answer some questions on it.

So strap yourself into your chair and get comfy while we dive right into this post!

I’ve covered this a little bit before in our post about Conditions in DnD 5e, but I figure that this situation comes up so often, that it might as well have its own little post.

As mentioned, Restrained is a condition in DnD 5e, by condition, I mean it is a mechanical effect that a character can be considered to be. Think of it like when you’ve played old RPGs where your character is “frozen” or “poisoned”, like in Final Fantasy or Pokémon.

So pretty simple, right? Being restrained could mean that they are tied up, which comes up ALL. THE. TIME. You could be using my grappling suggestion from our post on Grappling, where enough successful grapple rolls in a row can cause the grappled creature to become restrained.

Spell wise, there is the Web spell, which on failure can cause a creature to become restrained. Entangle, which has a similar effect. Ensnaring Strike is also a spell that can cause this condition.

How do I get out of Restrained in DnD 5e?

If it’s a spell that has caused the Restrained condition, then the spell will describe how the restrained creature stops the effect. Normally they just get to make a similar Saving Throw to the one they had to make in the first place.

Can you dodge while Restrained in DnD 5e?

According to the RAW (Rules as Written), there is nothing preventing you from taking the Dodge action while you are restrained. Now I would say that depending on the circumstances of the situation that has caused the creature to become restrained, they may NOT be able to take the dodge action.

Can you teleport while Restrained DnD 5e?

Yes, in fact, it’s one of the best ways to get around being restrained. Using something like Misty Step, to slip free from what’s restraining you, or similar spells can be a great way around this condition that doesn’t require finesse or strength.

Just keep in mind that if the person is restrained in such a fashion they cannot use the spell properly. So if they are gagged and the spell required a Verbal component, or their hands are bound and it requires a Somatic component then they won’t be able to cast the spell.

Short but sweet post on this condition. Like I mentioned, tying someone up in DnD is a situation that arises almost all the time. I don’t think I’ve had a campaign occur where this doesn’t happen at least once.

Hopefully, I explained it well and answered some of the common questions I see around the condition. So until next time, may your day be a Critical Success!