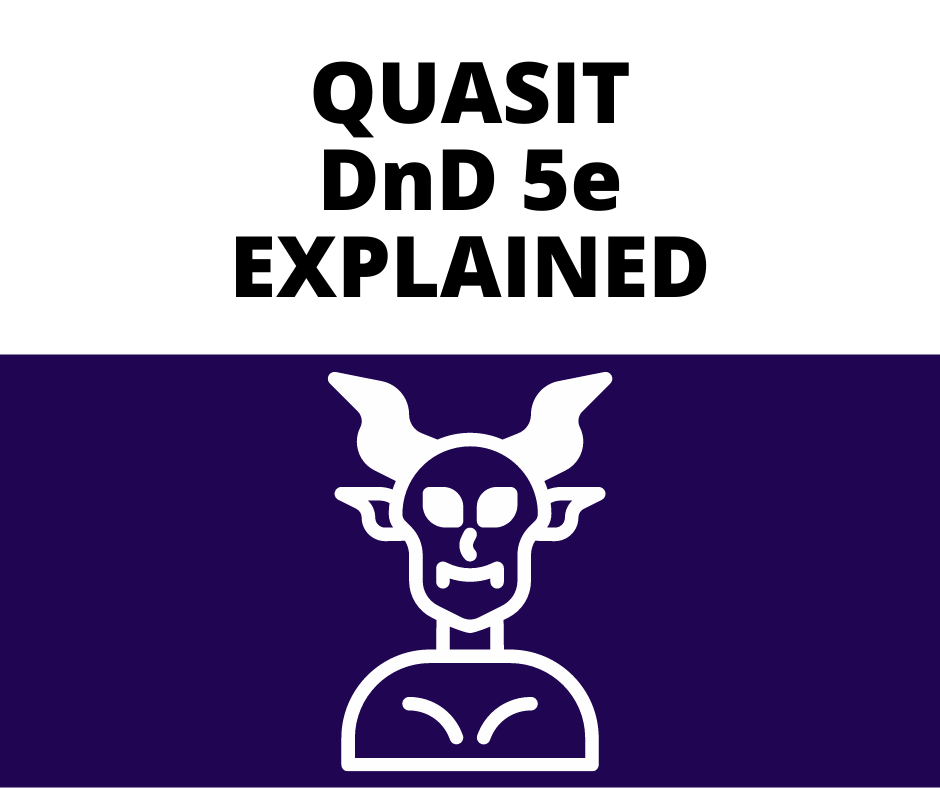 Hey folks! In today’s post, Quasit DnD 5e Explained, I’ll be covering this creepy little bug demon. First I’ll cover what a Quasit is, then cover what it can do, I’ll then go over how to use them in your games and finally, I’ll answer some questions surrounding them.

So get the bug spray ready as we dive into today’s post!

What is a Quasit?

A Quasit in DnD 5e is a tiny demon creature. It resides within the Abyss where it is the lowest in the pecking order of demons. They typically spend their time hiding from other demons or working for other demons as spies.

Their true form is said to be a 2ft tall humanoid insect-mouse-looking creature. They are extremely weak and do their best not to get involved in any front-line work. Their abilities allow them to achieve this pretty well.

What can a Quasit do?

They are simple creatures. Very simple. With low AC and low HP, they are not a challenge for even 1st level adventurers. In clusters, they could pose a small threat, but not much.

A Quasit has a number of resistances, cold, fire, lightning, and has non-magic resistance from bludgeoning and slashing damage. They are immune to poison damage and the poisoned condition. It is also resistance to magic, allowing it to have advantage on saving throws against magical effects and spells. They also have a pretty significant darkvision of 120ft.

These creatures can also shapechange, they can be either a bat, a toad, or a centipede. Allowing it to travel the material plane without much suspicion. This also makes them great spies for more powerful demons.

Their attacks are fairly simple. It can claw in its regular form and bite in any of its beast forms. It deals 1d4+3 piercing damage, but it also forces attacked creatures to make a Con Save and if they fail they take 2d4 poison damage and become poisoned for a minute.

They can use an ability called Scare to force a creature within 20ft to make a Wis Save, if they fail the creature is under the frightened condition towards to Quasit.

Finally, a quasit can turn invisible at will, the same typical invisible rules apply, if they attack or use Scare they become visible.

Based on the information above, personally, I’d say they would be good intro creatures for low-level parties if the GM was wanting to introduce more demon elements to the game. These creatures make a great appetizer before the main course of some more serious demons like a Barlgura or even more powerful like a Balor.

Think of them as the disposable henchmen of the demon world. That’s basically what they are. I’d typically have them dotted around as spies, maybe have some weird interactions with the players while the Quasit is in its beast form spying on them.

Can a Quasit be a familiar in 5e?

The Monster Manual states that yes, as a variant rule spellcasters could have a Quasit familiar if they so wanted to. Assuming they meet the criteria for summoning a CR1 creature as a familiar.

Yep, they sure are. One of the lowest forms of the Demons.

Do Quasits have wings in 5e?

Not in their true form, however, they can change into bats, which allow them to fly.

I’ll be honest, I’ve never really used many Demons in my games, so these little creatures have never come up in a game of mine. I do think they would work well in a Demon-focused campaign and having these creatures effectively be the breadcrumbs towards something bigger involving the Demons of the Abyss.

As always I hope you learned something from this post, I know I did. So until next time, may your day be a critical success!