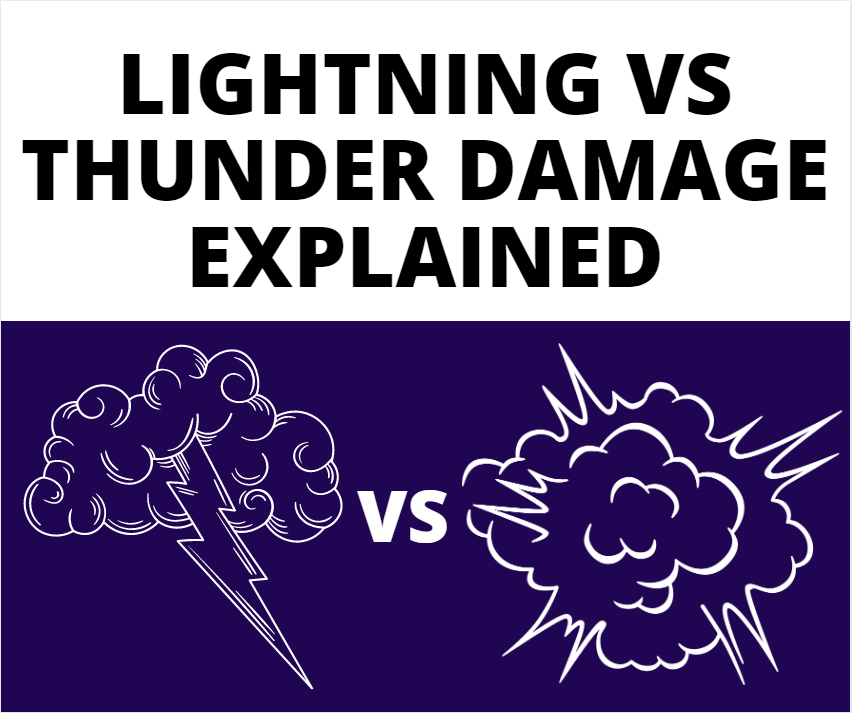 Hey all, so today’s post will be short and sweet, but one I’ve seen crop up a lot. In this post, lightning vs thunder damage in DnD 5e, we’ll discuss what the differences are in these two types of damage.

Both damage types are pretty easy to confuse, especially since we tie them together so much. I mean take Thor from marvel fame, known as the God of thunder, yet he’s firing lightning everywhere, it’s easy to confuse.

So let’s sit down and chat about it!

In DnD 5e, there are damage types, a whole bunch, we even have a post about them right here. The two we’re concerned with is lightning damage and thunder damage. As I mentioned, people easily get them confused, I think it’s down to media kind of mixing them up as well, as well as people not really being sure how the hell to describe thunder damage.

To put it simply, lightning damage is electric damage, either from bolts from the skies themselves to electrified traps set up by cunning engineers. This type of damage is fairly common in DnD, many creatures have abilities that cause lightning damage, and there are a good few spells which also inflict it.

Thunder damage on the other hand is more like damage that comes from a shockwave. So consider when an explosion goes off, and people are thrown from the area, not because of the fiery inferno at the center of the explosion, but the shockwave given off by the power of the boom. Thunderous Smite and Shatter (spells in 5e) both talk about how there is a loud sound when the spell is cast or connects with a target. This is because it’s supposed to be like being hit by some sort of concussive force.

Normally I try to give a little flavor on what I’m talking about, but we’ve already discussed these types of damage in our longer posts about the specific damage types. So please check out our post on DnD 5e lightning damage and our post on DnD 5e thunder damage. They should hopefully be insightful.

Hopefully, this post made it a little clearer for people on the difference between these two damage types, as I said, it can be easy to mix them up. So thanks for taking the time to have a read through this post and until next time, may your day be a critical success!