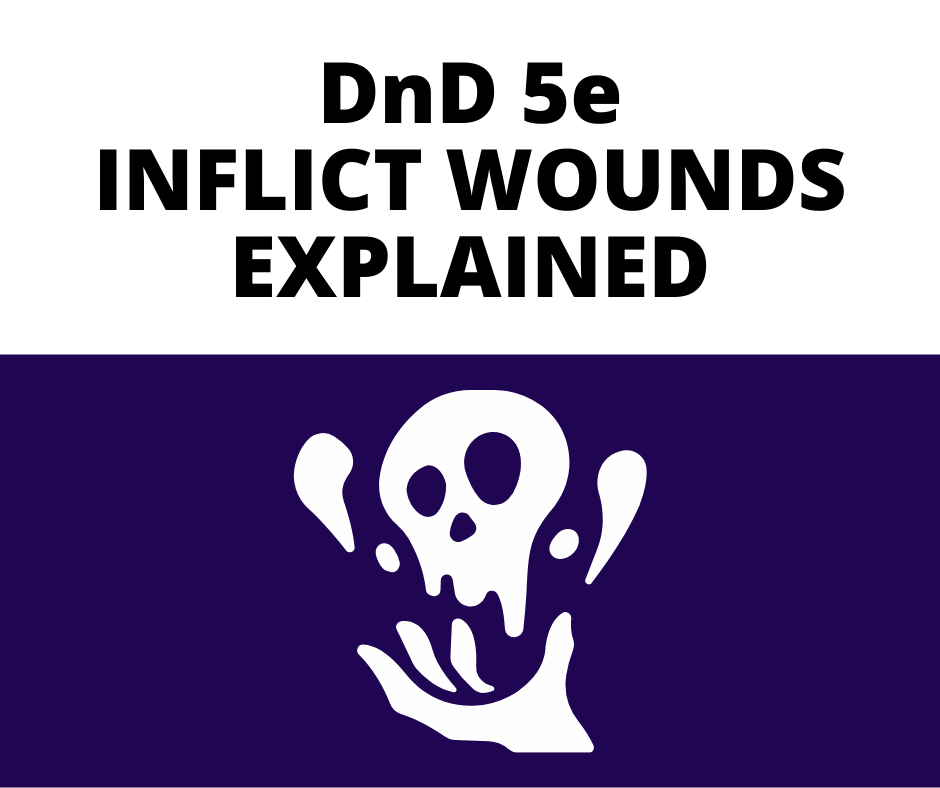 Happy hump day folks! In today’s post, Inflict Wounds DnD 5e Explained, I’ll be covering this fairly simple but quite potent spell. First I’ll go over what the spell does, then how to use it and finally finish off with some questions that surround the spell.

So keep your personal space from casters and get ready to dive right into this post!

What is Inflict Wounds?

Inflict Wounds is a 1st level Necromancy spell. It takes an action to cast, and the caster needs to touch the target. Typically, only Clerics have access to it.

The spell is SUPER simple, the caster uses it on the target and must make what’s called a Melee Spell Attack, which has no major difference over a ranged spell attack. Although, keep in mind there are situations like when a target is prone that may affect advantage/disadvantage on the roll.

If the caster succeeds in hitting the target, then they deal 3d10 Necrotic damage to the target. Considering this is a 1st level spell, that is a serious load of damage. Plus, if it crits? Then that’s some serious damage early on in the game.

How to use Inflict Wounds

Since it’s a first-level spell, honestly if you’re looking to do damage and you have this spell, just run in and try and blast someone. Plus, if you’re a Cleric, the likelihood is that you’re going to be in the fray anyway.

There really isn’t much to this spell. One really mean thing you can do as a GM is having enemy spell casters hold their action for someone to come round a corner or through a door, and then use the spell as their held action. Although be careful as this can really hurt, so you’ve been warned to use it responsibly!

What level spell is Inflict Wounds in 5e?

Can any Cleric use Inflict Wounds in 5e?

Yep, any Cleric can use this spell, there are no barriers in order to use it. Unless you set up your own Roleplay reasons to not use the spell (A pacifist Cleric or something).

Can Inflict Wounds crit in 5e?

It sure can, and it can be very nasty when it does.

Can you cast Inflict Wounds with a Weapon in 5e?

No, you are casting a spell, so no weapon is actually used in the process of casting it on someone during the attack. Keep in mind that typically a spellcaster must have a hand free to cast spells, so if you were using a sword and shield you’d need to put the shield or sword away to cast it.

Another short post, but it’s a fun spell that I find scales quite well, at least in my campaigns. So I encourage others to use it as well. As always though, I hope you learned something about the spell, and until next time may your day be a critical success!