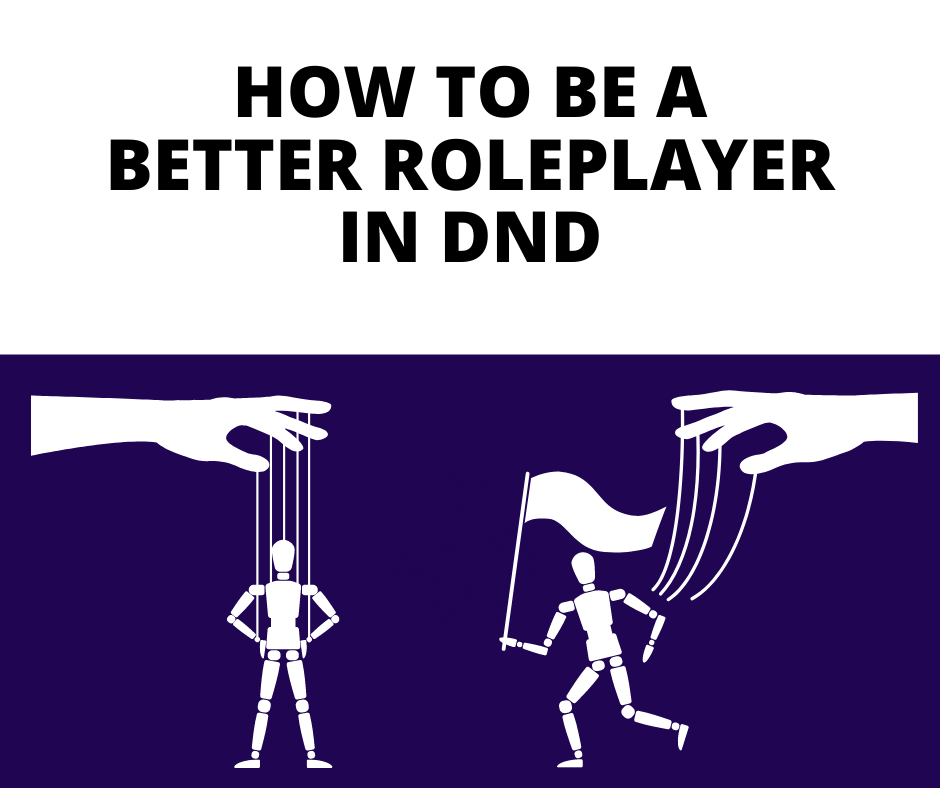 Happy Sunday everyone! I hope you’re all well. In today’s post, How to be a Better Roleplayer in DnD, we’ll be talking about the simple things you can do to improve your RP as a fledgling player, or even a veteran.

So get out your pencils and notepads, and buckle up as we dive into the post!

What is Roleplaying in DnD?

First off, I figure we might as well cover this quickly, for the newer players. D&D is a Table Top Role Playing Game (TTRPG). I’m sure if you’ve played games before you’ll have heard of the term RPG. Games like Skyrim, or World of Warcraft are games where you create your own character and play through the world in your own way.

That’s essentially what an RPG is all about, creating your own character and playing the game acting as you believe that character would. For the most part, it’s the same in DnD. You create your character, you write up their backstory, which typically informs their personality, then when you play the game you act as you believe that character would. This includes talking to NPCs, and your fellow players, and generally interacting with the world your GM has set up.

Why Roleplay in DnD?

I understand if you’re not comfortable RPing, but if you’re at a good table surrounded by friends, then you should try to dip your toes in the water of RPing.

In my opinion, RPing adds a whole other element to the game that transforms the game from a simple board game into a social experience unlike anything else. The more everyone is into roleplaying the more the game transports you to another world where you are your character.

It then adds more stakes to the game. If people are more invested, then they truly want to reach the goals for their character, basically, they do in some way, feel what that character may feel. No one is asking you to be a professional actor, but I can promise you, it will add an amazing layer to your game.

My Top Tips for Better Roleplaying!

Here are the tips I can think of for being a better roleplayer in DnD.

This one is simple but goes a long way. Just listening to your GM and your players. Listen to the things they put out there for their characters. If you’re listening, you’ll pick up on things that you’ll be able to use to your advantage later on.

Your fellow players will also have interesting things to say, which if you pick up on them, can add to the comradery between your character and theirs. As players, you should be helping to build each other up, by organically exploring each other’s characters by talking and listening in-game.

Always be asking questions. Your GM will love you for this (mostly). Generally, you should try to ask your questions in character to the NPCs of the game, but sometimes you may need to ask your GM directly, as your character may already know the information, but you, the player, do not.

Your GM will get to explain more of their world this way, without just doing some kind of monologue, or info dump, which can be clunky and overwhelming. So expanding your knowledge organically by asking questions is super useful to you as a player and your GM.

Also, be sure to ask questions of your fellow players. Ask them about their backstory, where did they grow up? Do they have anything waiting for them back home? What are their plans? What do they plan on doing once their quest is complete? These all help add to the bonds between your characters.

This is another simple one but it’s very important. It kind of goes hand in hand with listening and asking questions. It means that, unless it’s an emergency, don’t be on your phone while playing, or watching TV.

With the nature of this game, it’s very easy to miss key information or information that pertains to your character. As a GM, having to reiterate information because a player was distracted by social media, or really any distractions that aren’t required frustrates me. It eats up time in the game and can derail your thought process.

You’re there to play the game, if you need more breaks, then speak to your GM, who will more than likely be happy to accommodate your needs. Being present will add to your immersion within the game, and will only add to the enjoyment.

This is an important one. You can add a lot to your character by doing some research outside of the game. Does your character follow a specific God? Is your character a spellcaster and you want to add more flavor to your spells? Research will help tremendously here.

Look up your spells, read what they do, and how they are cast. All spells have specific components, some have verbal, some have somatic (symbols drawn with your hand), some have materials that need to be used, and some have a mixture of all three. Reading up on these can allow you to add flair and flavor to your own descriptions of your spells.

Also knowing how your spells work, will dramatically speed up the game time, so please read up on how your own spells function, or at least the ones you regularly use.

Read up on your God’s ideals, their history, their enemies. This will help you incorporate it into your character, with their own interpretations of the information. Of course, you may need to speak to your GM about your God, or Patron’s role in their world.

Work with Your GM

The biggest boon to your roleplaying arsenal is likely this one. Working with your GM outside of game time to help flesh out your character is massive. It not only helps the GM understand what you want from that character’s journey but also helps you have a more concrete idea of what you want from your own character.

As well as that, working with your GM to understand their world more will add to your roleplaying toolset, it will allow you to ask more specific questions. Which in turn will give you access to better information, so it feeds into itself.

Talk to Your Party

Last but not least, talking to your party is massive. First off, it gives your GM a break from having to have a part in every “scene”, and gives them time to arrange their notes or just be a passenger in the journey.

This also builds the relationships between the characters. However, you should also talk to your party members outside of game time, to get more of an understanding of their character. This can allow you both to build interparty story arcs properly, rather than clumsily trying to do it organically.

Think along the lines of two party members who dislike each other to begin with. If the players talk about this outside of the game, they can understand where they could take this story arc. Maybe it grows to a boiling point between the characters, or maybe through some obscure interest/event, they bond.

These things are much easier to accomplish by talking with your fellow party members inside and outside of the game.

Regardless of your skill level in the game, I hope you learned something about roleplaying with this post. Of course, this is just my interoperation of what makes a good roleplayer and is bias to what I expect of players at my table. Although I do feel they are generic enough that it could benefit anyone looking to up their RP.

As always, I hope it helped, and until next time, may your day be a critical success!