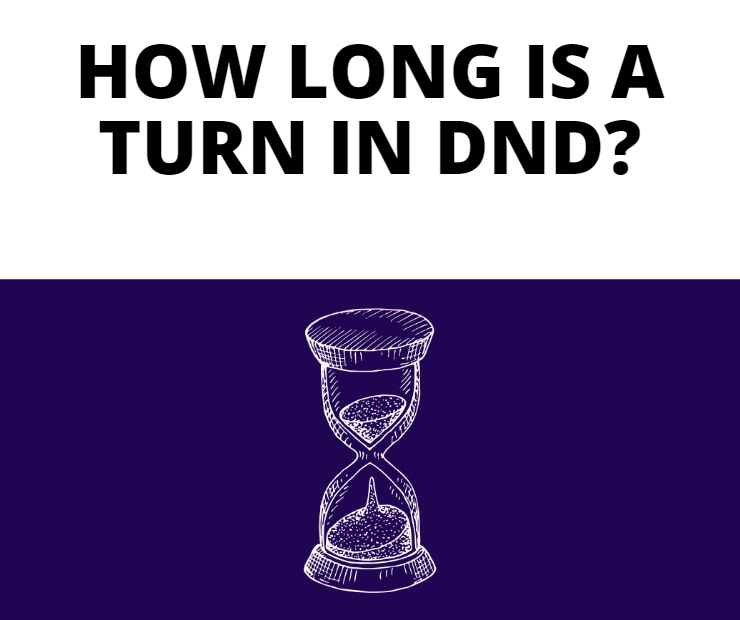 Hey folks! Hope your week has been going well! With a new week brings a new post, and this week we’ll be talking about, How Long is a Turn in DnD? This is a very open-ended question, but I shall attempt to answer it.

First off, we have a couple of things to mention for the post, when this question is asked, there are two ways it could be interoperated, one way is how long does the average turn take in D&D. The other way is how much time spans within the game world per turn.

The former interpretation is a bit more complex to answer than the latter one, but I shall do my best to make it clear. So start the clock and let’s dive into the post.

Within DnD, when we get to certain scenarios the game will “slow down” to a turn-based system. Which is the basis for D&D combat. So when we talk about “turns” in DnD we’re talking typically about a turn in combat.

To talk about turns in combat we must break down how combat is broken up in DnD. So here’s a quick layout of how combat flows: –

So now we know how a round plays out, each character acting in combat takes their turn within the round, and within the context of the game, a round lasts about 6 seconds.

Within the mechanics of the game, each person’s turn takes place during this 6 second round. So a turn takes about 6 seconds, but everyone’s turn is simultaneously occurring.

We now know how long a round and a turn are mechanically speaking within D&D. However, you may have been wondering how long a turn takes the average player, in real-time, and not in-game.

Of course, this is a bit of an open-ended question, as there can be a lot of factors to consider. So what I will do is lay out what needs to be done on a turn and tell you where the length of a turn may increase based on certain factors.

I will definitely say that as a GM you should encourage your players to plan out their next turn ahead of time, as opposed to waiting till it’s their turn. Also when you announce whose turn it is, also announce who’s next after that, so they can prepare. This will dramatically increase turn speed.

On a combat turn, these are the things you can typically do: –

That’s a pretty basic overview of what can be done on a turn.

So now we know what you can do on your turn, but how long would that take a player to do? Well as I mentioned previously, some classes might be quicker than others.

If you’re a martial class, like a barbarian, or a fighter, you may just want to run in and bonk the enemy with your weapon. This doesn’t take long to figure out, and they should be pretty used to doing it, so the turn would be rather short.

It would maybe take a couple of mins for a fighter to decide their target, move appropriately, and attack the number of times they’re able to attack at their respective level. Maybe they even use a bonus action to heal themselves after it.

If we have a spellcaster in the party, they have A LOT more things at their fingertips. It can easily take a spellcaster upwards of 10 mins to decide on what they want to do and execute that plan. So they have to be given a little more leeway when it comes to their turn length.

As I mentioned, please try to encourage players to plan their turns ahead of time. Announce whose turn it is and who’s next. Also try to make it clear that your players should read what their staple abilities do, otherwise the whole game can be taken up by people flicking through the books to read abilities they should already know the mechanics of.

How long is a minute in DnD 5e?

10 rounds. As mentioned in the post, 1 round is over when the final person in the initiative order has taken their turn.

Knowing how long something takes using rounds as a measurement is useful for tracking spell length.

What does once per turn mean in DnD 5e?

This means it can only be used once on each turn.

For example, a rogues sneak attack can only be applied once per turn, but they can use it every turn, if applicable.

What does once per round mean in Dnd 5e?

Similarly, to above it means it can only occur once within a single round of combat.

Typically, this terminology is only used to limit a spell. It actually only shows up in two spells in the standard books. Tree Stride and Tsunami.

As always, I hope you learned something from this, and if you have any questions at all feel free to comment or shoot us an email and I’d be happy to reply. I hope you enjoyed the post, so until next time, may your day be a critical success!