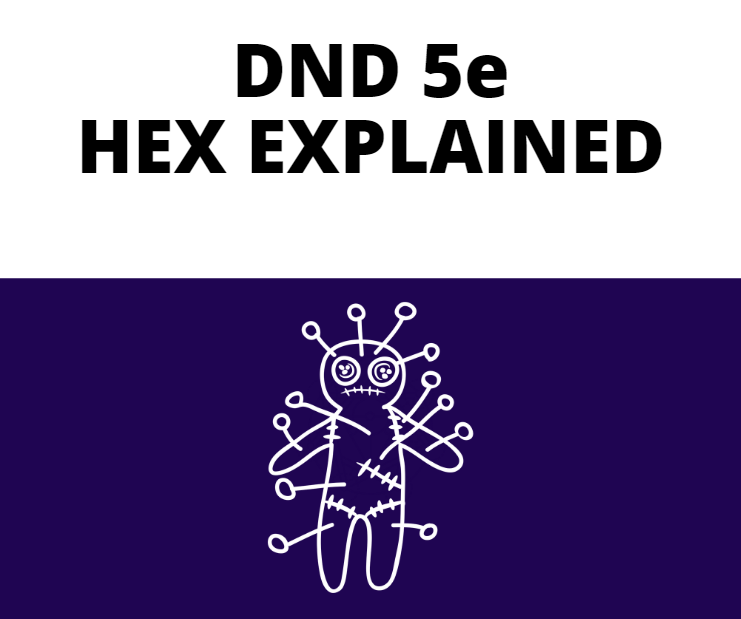 Hey folks! Another week another post. This week our topic will be, DnD 5e Hex Explained. First, we’ll go over the spell itself, then give a little RP scenario so you can make the spell usage exciting, and we’ll answer some of the frequently asked questions about the spell.

So let’s not waste any time and dive right into the post!

Okay so let’s cover what Hex is exactly. Hex is a 1st level Enchantment spell where the caster places a curse onto a creature within range, and while the spell lasts, the caster can deal extra damage to the target upon a successful hit (1d6 Necrotic damage to be exact).

The spell is also a bonus action, making it a great choice for

On top of this, the caster may also choose an ability upon casting the spell (the main ability stats, so Str, Dex, etc) the target of the spell will then have disadvantage on all checks made with this skill. Keep in mind that this is specifically ability checks made by the target, not saving throws.

I find sometimes in DnD that it can be hard to imagine what some of the spells may look like. Especially when it isn’t an outright flashy spell, like Fireball, or Tsunami. So I like to add these sections to my posts on spells to help get your own creative juices flowing.

Here’s how I might describe Hex when it shows up in a game of mine.

As the Warlock overlooks the battle from his vantage point, not yet having been noticed, he sees his Barbarian ally running toward a stout dwarf with his arms splayed out.

The Warlock knows this move, the Barbarian is about to grab hold of the Dwarf and attempt to tie him up in a grapple.

The Warlock stands up from his cover and quickly casts a spell. A black mist shoots from the Warlock that only he can perceive.

The mist attaches itself to the Dwarf, as it dances around him it saps the energy from his muscles. The Warlock smiles, knowing the Dwarf is going to have a much harder time resisting his friends grapple.

So I figured going forward it might be best to add a quick FAQ to the posts so you don’t need to scroll through my long ramblings when you might be looking for just a quick reference to something.

As answered above Hex is a 1st level Bonus Action Enchantment Spell, only really available to Warlocks. It deals 1d6 Necrotic damage and causes disadvantage on ability check made by a chosen ability from the warlock while the spell is active. It has a range of 90ft and is a concentration spell.

This is a bit of a subjective question, but I’d say it’s a great spell. It’s a bonus action, which is always good to have something to use up your bonus action. Allows the Warlock to deal extra damage to their target, and can give disadvantage on ability checks to help out with specific team strategies or synergies.

Does Hexbalde’s Curse Stack with Hex?

Yep, believe it or not, they do stack. Hexblade’s curse is not a concentration spell, it just happens and exists. So both can be used to deal even more damage to a target. Pretty good synergy in my opinion.

Another yes. So it might seem obvious at first, of course it would trigger Hex, however then you think as the spell grows in power, and the Warlock can shoot 2/3/4 beams on a single cast, you might wonder how this affects Hex. Well since each beam requires an attack roll, every single hit would trigger Hex’s damage. Another great synergy for Hex.

No, attack rolls are considered a separate thing from ability checks, so Hex does not cause disadvantage on attack rolls.

Does Hex give disadvantage on Saving Throws?

It does not. Saving Throws are similar to above, where they are considered a separate type of roll from Ability Checks.

I enjoyed the slight change to our post format this week. I hope you all find the FAQ section useful in answering some of the things I’ve seen asked about this spell. We may go back and update some of our older posts and add an FAQ in, but for now, you can look forward to seeing them in all relevant future posts.