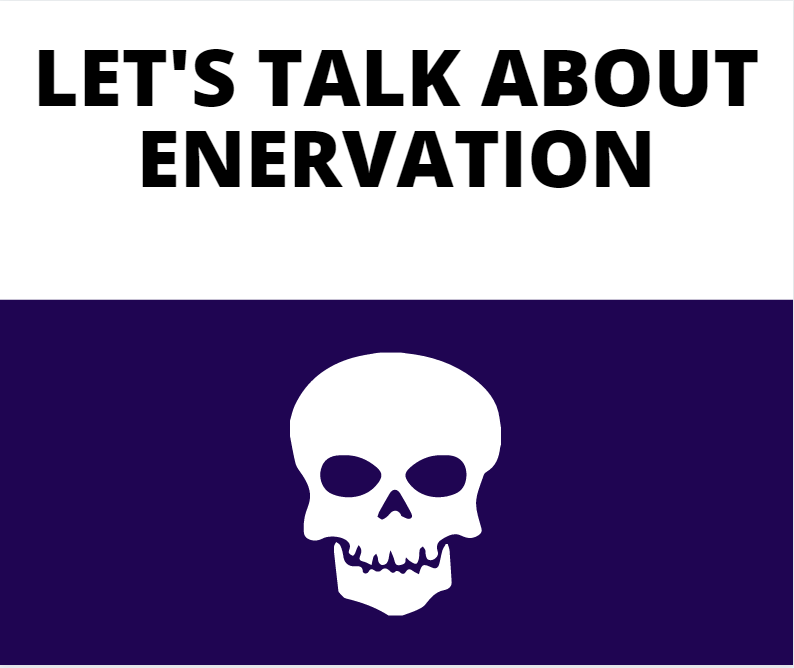 Hey all, hope this week has been good for you. So in today’s post, Enervation in DnD 5e, we’ll be taking a brief look at this necromancy spell from the book, Xanathar’s Guide To Everything.

We’re going to be trying an additional format to the posts, so while we still have our “Explained” series, we’ll going to do a series called “Let’s Talk About” that goes into a very specific thing, like a single spell, item, character, or creature. They’ll typically be shorter posts.

So sit down and let’s talk about it.

This spell comes from a book that came out a little later in DnD 5e’s lifespan, called “Xanathar’s Guide To Everything”. This book contained a whole host of additions to the game, including spells.

One of these spells is the Necromancy spell known as Enervation.

This spell allows a creature to target another creature, force them to make a Dex Saving Throw, and if they fail the target takes 4d8 Necrotic damage. Each subsequent turn after a failed save allows the caster to use their action to automatically deal 4d8 damage to the target again. This lasts until the spell ends. On top of the Necrotic Damage, the caster also heals for half the amount of damage.

If a caster was to use this spell on another creature, what would it look like? As you may have noticed from previous posts, I like to try and show how I would describe the spell when it showed up in my game. I find describing the small details of things like that can really add flavor to your game, without really much effort at all.

So let’s say an evil Warlock was to cast this spell upon our friendly barbarian, Crog.

The warlock raises his hand and gestures the symbols in the air. Before anyone has any time to react, 3 long spikes of pure darkness stretch out at incredible speeds from the warlocks sleeve. They pierce the flesh of Crog the barbarian. The tendrils can be seen drinking the blood of Crog. As they do so, the cuts on the warlock’s face and torso start to slowly mend as the tendrils of darkness feed him Crogs lifeforce.

I also hope that this gave you a little insight into a spell I think is very cool, it adds some nice ways to heal as a caster and is extremely cool visually. So thanks for taking the time to have a read through this post and until next time, may your day be a critical success!