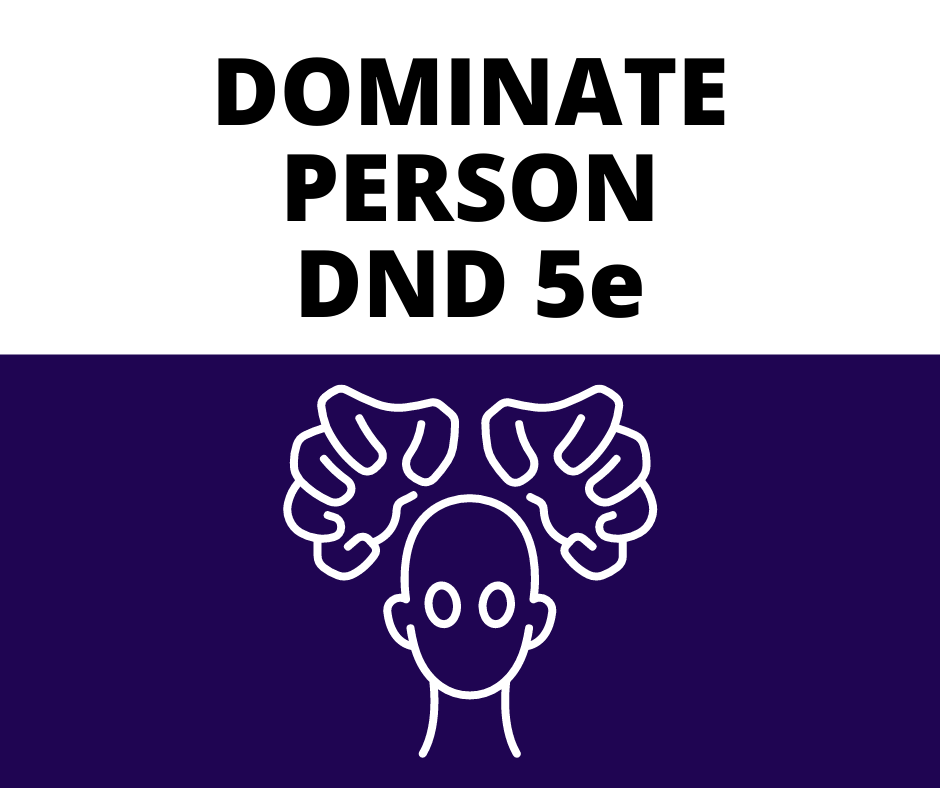 Happy Sunday folks hope all is well. In today’s post, Dominate Person DnD 5e, we’ll be discussing this mind-altering spell by first explaining how it works, then giving a little bit of flavor for the spell, and finally, I’ll go over some common questions.

Just let the magical influence wash over you, sit back, and strap in for this post!

This is a very interesting spell, on the surface, it might seem simple, control the enemy doing the most damage and have him change sides for a bit. However, this spell can be used very creatively. Dominating the Evil King for a moment to sway a decision could be the difference between life and death!

The spell itself is a 5th level enchantment spell. You use your action to force a Wis Saving Throw on the target of your choice. If they fail, you have control of them in one of two ways. You share an immediate telepathic link to dictate their actions, but let them do mostly as they please. You can also spend an action and control the target directly.

The spell lasts up to a minute and is a concentration-based spell. It can become very strong later on when it can be cast at a higher level allowing it to last 8 hours using a level 8 spell slot. Which could almost be kept going indefinitely by someone with that level of spellcasting.

As alluded to earlier in the post, this spell can be used in a multitude of ways. Both combatively and in more role-play scenarios. In combat, trying to using it on a humanoid that seems tough or a spell caster before the fight starts is a good plan.

Using it to smooth over a situation that may have gotten out of hand, like stealing and being caught by the authorities is also a pretty good plan. A lot of people will try to save their spells for the perfect opportunity, however, you should remember that you have access to these spells every single day, don’t be so frugal with them.

The Rogue has shown The Wizard the secret path to the hidden upper levels of the throne room. Unused for centuries. Both members of the party watch close as they see the Bard who crossed them enter the room. He would pay in a moment.

As The Bard reaches the throne and kneels, asking “Greetings your majesty, what can your humble servant do for you?”. The Wizard, still unseen, begins casting a quick spell, for a moment his eyes glint solid black, and so do the kings. They were linked.

The King stands, and starts to shout, as well as rush out of the room “Take this man to the prisons, he is a traitor, let him rot, and do not bother me with the details, I must leave quickly for the bathroom”

The Guards then take away the screaming Bard as The Rogue and the Wizard snicker in the rafters still unseen.

What level is Dominate Person in DnD 5e?

Can you Dispel Magic on Dominate Person in DnD 5e?

Yes, you can. However, since Dominate Person is a 5th level spell, and Dispel Magic is a 3rd level spell, the person casting Dispel Magic will need to make a spellcasting check as noted in the Dispel Magic text. The person Dispelling can also up-cast the spell so that it immediately breaks the effect without rolling.

As always I hope you all learned a little from this post and your questions were answered. Dominate Person is a very cool spell that can really change up a lot of scenarios, be it RP or combat. Also, keep in mind fellow GMs that it’s not just players that can use this spell.

Until next time, may your day be a critical success!