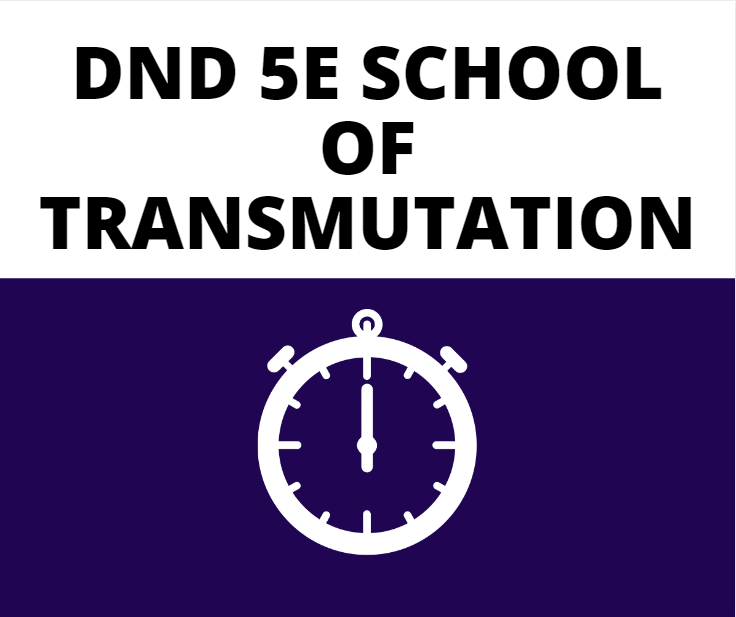 Hope you’re all well, in today’s post, DnD 5e Transmutation School of Magic Explained, we’re going to be going over the school of magic known as transmutation. We’ll first summarise the school, look at some specific spells, and then go over some ideas on how to describe transmutation spells.

So here we go, let’s look at the school of transmutation.

So transmutation is an interesting one, it’s not as straight forward as say, evocation, since it’s about manipulating creatures and objects around you. High-level transmutation even has the capability to change the laws of the universe (at least in small areas around where the spell is cast).

Powerful transmutation casters have the ability to shape the world around them, allowing themselves to fly, change the weather on a mass scale, and even change one creature into another. They can usually cast these spells on allies as well, making them powerful support casters in the group.

As said above, transmutation spells can alter the person’s physical form to aid them in combat, either defensively or offensively.

Barkskin, this spell allows the caster to touch a willing creature, and make their skin like bark. This means that the targets AC can’t be any less than 16. This means that even if someone doesn’t have armor on, they can naturally still have some kind of armor protecting them.

Then we have spells that, in a localised area, can bend the rules of the universe.

The Time Stop spell allows the caster to stop time for 1d4+1 turns. During this time, the caster, and only the caster can take action during this turn. This spell is limited to only being able to affect you. You cannot damage another creature, or manipulate an object being carried or worn by another creature or the spell will stop.

Transmutation is all about physically changing the things around you. So I like to make sure I mention the physical effects that show on the creatures, or in the area that the spell if affecting. So let’s say that a wizard casts Haste on their Fighter ally during a battle, this is how I would describe it.

As the wizard draws the arcane symbols in the air and a glow of green energy surrounds their hand. They lay their glowing hard on the shoulder of their big sword-wielding friend, as they do the green energy flows into their ally. As it flows into the fighter, their veins start to grow green. The fighter feels time almost slow around them. With the extra energy, the fighter sprints forward, and unleashes a flurry of attacks, more than they would normally be capable of.

So hopefully this helped a little with your understanding of transmutation magic and what it can do. I’d like to hope the descriptions allow you to consider how you might go about describing some of these spells. As always thanks for taking the time to have a read through this post and until next time, may your day be a critical success!