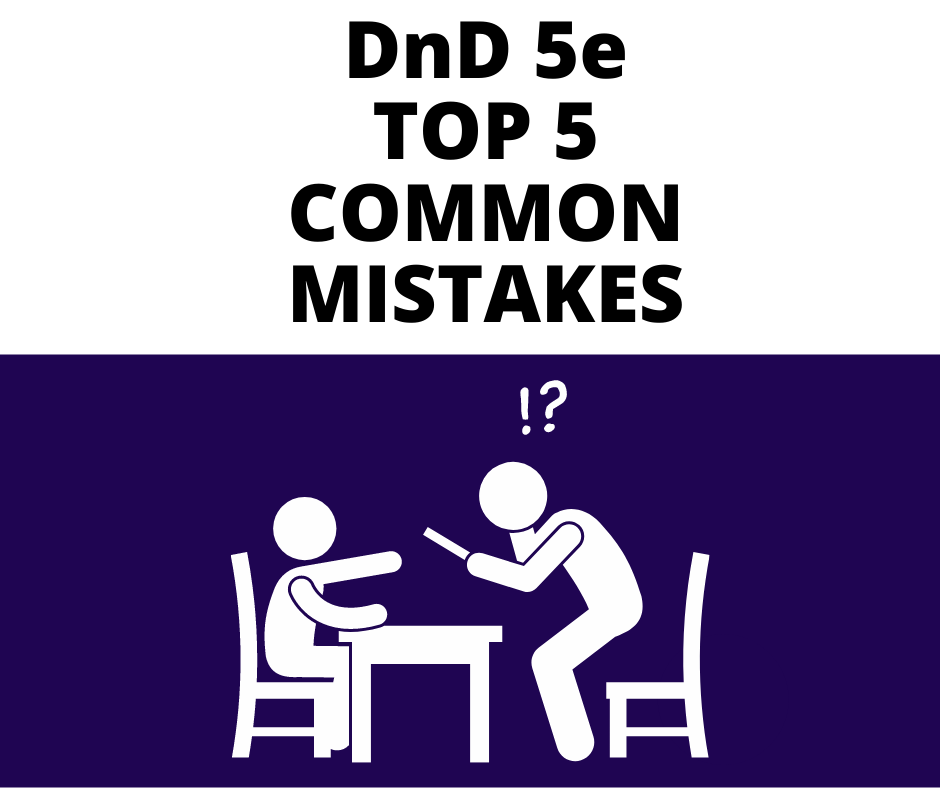 Hey folks! In today’s post, DnD 5e Top 5 Common Mistakes, I’ll be looking at my list of top 5 common mistakes or misconceptions about DnD and rules that exist within the game.

I’ll just blast through each one and give some info on the topic at hand and try to set the record straight. Keep in mind these aren’t in any particular order, just the 5 I see come up often enough.

So get your learning hat on and get ready as we jump right into today’s post.

So I’ve seen this one a few times, people seem to think Wizards cannot cast spells in heavy armor. Now, this is partially true, it does literally say in the books that wearing heavy armor can be too distracting and hampers you physically to cast spells efficiently.

However, there are ways to make it work for you. If someone is making a Wizard, if they make the character a Fighter first, then multiclass into wizard for the rest of their levels, they would have immediate proficiency with heavy armor.

The proficiency allows the Wizard to use the heavy armor without any penalties to their spell casting. Neat, right?

I believe in older editions of the game; radiant damage would do extra damage to undead creatures. However, in DnD 5e, this is no longer the case.

Now it seems this is mostly gone. Some undead still retain a weakness to radiant damage, but the best thing to do is to read a monster’s stat block before you use it to see what it’s vulnerabilities, resistances, and immunities are.

This is one that when I started playing DnD I had no idea about. I thought eventually you’d just stop using them and mostly rely on your other spells or weapons. However, that’s not the case here.

Cantrips actually grow in power as you level up. They normally get stronger at 5th, 11th, and 17th levels. Of course, read your particular Cantrip to make sure if that’s the case. Not all Cantrips grow in power but a lot of the attack ones do, so keep it in mind if you feel you’re lacking damage with your simple spells.

This one has become a bit of a meme. Both at my table and online. Basically, Rogues have an ability called Sneak Attack. This ability allows them to add extra damage to their attack. For this to occur one of two things need to happen. Either A) They have advantage or B) A non-incapacitated friend is within 5ft of the target.

Now I’ve seen all sorts of ways people mess this up in their heads. I’m not sure why it became such a common rule to misunderstand, but it seems the memes are true, at least at my table. I think for some reason people confuse it with the Rogue Subclass Assassin, which gets the Assassinate ability which allows you advantage on any creature that hasn’t taken its turn, and you have critical hits against any creature that is surprised.

So just remind your players they these are two separate abilities, and if they’re having trouble with them, then it’s best to note them front and center of your notes/character sheet.

Last but not least, I think to this day, there are still people that view DnD as a competitive game between the GM and the Players. I think new players may pick this up from memes and funny stories about antagonistic GM/Player relationships, and I’m sure that for the right people it can be fun to have this style of game.

However, more often than not the GM is there to facilitate the game, to be the bridge between the rules and the game the players are playing. The GM is impartial and should really play the enemies and NPCs as if they exist in the world and not as silly AI from a video game.

This does require a little more on the part of the GM, and of course, run the game in whatever way gives you the most fun. I just personally think you foster a much more fun game and the environment when the players don’t see you as the antagonist.

I hope most of these helped you out and helped clear the air in regards to these rules. These are things that have caught me out at some point in my GMing career, so I’m here to ward off other GMs from making the same assumptions.

So until the next post, may your day be a critical success!