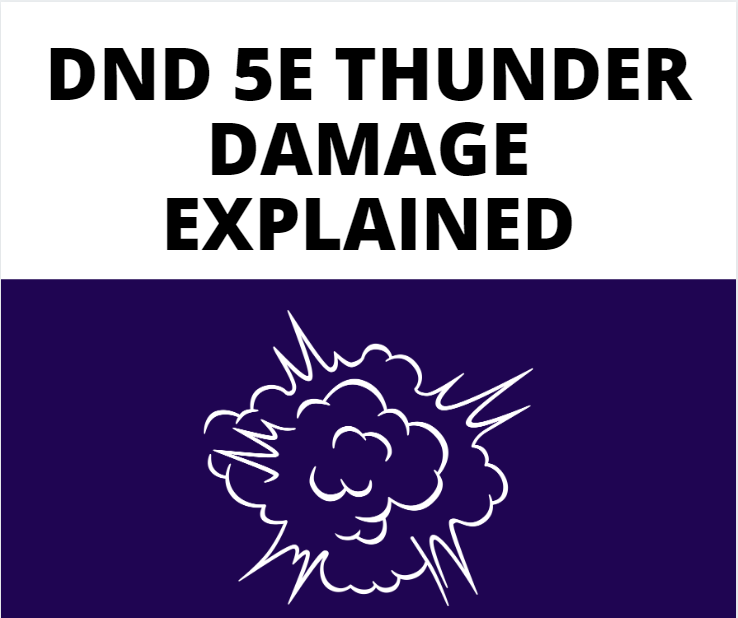 In this post, DnD 5e Thunder Damage Explained, we’ll be taking a look into which ways Thunder Damage may show up in your games. We’ll look at some specific examples of creatures and spells that can inflict Thunder Damage.

So let’s not mess around and dive right into our post.

Thunder damage is actually an interesting damage type in DnD, because when you consider there is lightning damage, you then start to wonder, what the hell is thunder damage?

The way I think about thunder damage is that it’s like the shockwave of an explosion. If you’ve ever seen videos of BIG explosions, you tend to see this wave of force that’s practically invisible, that would be akin to what thunder damage is.

So with that in mind, let’s have a look at some specific examples.

Now in DnD 5e, thunder damage doesn’t actually come up all that much, especially for creatures. In fact, there is only one creature that inflicts it, and that is the Djinni.

So the Djinni, yes the magical wish-granting creature, can cause thunder damage by imbuing its weapons with such energy. When they swing their weapons they can choose to do 1d6 thunder damage or lightning damage.

I like to imagine this as them swinging their sword so hard and fast (they have 3 attacks per turn), that they cause small shockwaves to come from the weapon itself.

There are definitely more than a few spells in the game that can cause thunder damage. Again it’s not a damage type that’s very widely used. Here are some examples.

The Shatter spell creates an intensely loud noise which in an area. Any creatures caught in the area takes 3d6 thunder damage and half as much if they succeed on a Con saving throw. Shatter is interesting as well as it has an added gimmick.

Creatures made of “inorganic material” have disadvantage to the Con save. Also, objects in the area that aren’t carried or worn are also damaged by the same amount.

One such spell is Thunderous Smite. A low-level spell but causes a decent amount of damage and also has some nice added aspects. It adds 2d6 thunder damage to the weapon attack. It also has the added benefit of pushing the target away by 10 feet and knocking them prone if they fail a Str saving throw.

On top of this it has a nice description which says that when you hit with the weapon, it causes an audible ring within 300 feet of the attack.

Most of the thunder damage spells are pretty much direct damage, not a huge amount of fancy or crazy effects going on with them.

When I have thunder damage come up, I tend to describe is as shockwaves. It seems to me that’s what the whole shtick is based on the idea of it being similar to a shockwave, or soundwaves basically a blast of invisible force.

Say someone casts Thunderous Smite, I’d say something along the lines of

As you raise your weapon in the air, you feel it vibrate with magical energy, you bring it slamming down on top of your foe, the energy built up in the weapon audibly explodes outward as it hits them. Roll damage.

Well, that’s been our quick dive into Thunder Damage. Like the other posts, I hope this one has given insight into a bit of a strange damage type. Hopefully, it has given an idea on how to describe it when you cast it or have an NPC cast it when it shows up in your games!