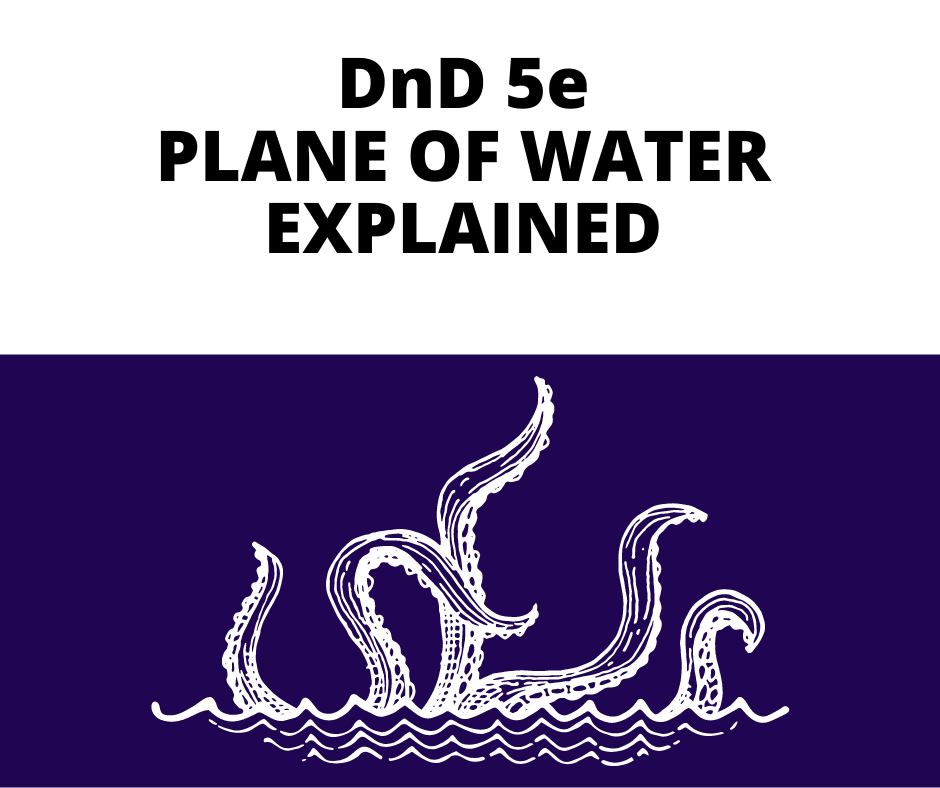 Evening folks, I hope y’all have been good since the last post. In this week’s post, DnD 5e The Plane of Water Explained, I’ll be going over my own research on the Plane of Water, a place I can say I’ve not used all that often.

So let’s get on our water wings as we dive into this week’s post!

What is the Plane of Water?

Like the other planes, the plane of water is comprised mostly of water. A massive sea with no surface and no bottom. From different excerpts, it is said that it’s like being more than a few meters underwater on the material plane. Meaning there is no light except a light sea green glow within the water and the bioluminescent patches of native flora.

Due to the nature of the elemental planes, detritus from the other planes can drift here, so large free-floating rocks have been populated by scores of corals. These corals create areas of plentiful life, which some civilizations have grown around. Other patches of these corals are hunting grounds for large predators which in turn makes it a hunting ground for even larger predators.

The dangers here are varied, first, one must be able to breathe here, which can be a difficult task for most land-dwelling creatures. Second, as mentioned, are the vast lifeforms here, large creatures happy to snack on unwitting visitors, or creatures happy to capture and imprison. Thirdly, there is a sort of weather system here, streams of detritus from the other planes can shoot through the vast currents of this plane, which even on their own are incredibly dangerous.

What’s in the Plane of Water?

This plane is vast, and while life can be found in almost all of it in some form, there are places here that host more than just simple aquatic life and vegetation. The large clusters of life here have to have places to call home.

The City of Glass

Consider this city to be this plane’s version of the City of Brass in the Plane of Fire. Bustling with life from all across the various planes. It is even said to have many sections of the city where land-dwelling creatures are able to breathe normal air. Consider this place the center of all trade within this plane.

The Citadel of Ten Thousand Pearls

This is the city founded and lived in by the Genies of this plane, the Marid. This is their seat of power in the various planes. Made of living seashell, this magnificent building is adorned with luminous pearls which beckon in a dark and dense sea.

Who’s in the Plane of Water?

This plane is no stranger to life, as alluded to previously. I’ve over course mentioned the Marid, this elemental plane’s version of a genie, they are, however, not the only life here.

These massive creatures are extremely powerful beings. They fall under the Genie classification, which means they are capable of altering reality to some degree. They are considered to be greatly self-reliant, so much so it is said that due to their innate pride, every Marid believes they should be the ruler of the Marids. They can be very materialistic, often collecting their own little hordes of treasures and trinkets. So keep that in mind while trading with them.

These fish-like humanoids have made some pockets of civilization within the Plane of Water and coinciding with what seems to be a theme of the underwater creatures, they are very prideful. They often boast about the dangers they have protected the world from. Dangers the other races would know nothing of.

They are often isolationists, due to their self-imposed belief that they must protect the material plane from the evils that can dwell in the plane of water. They are noble people and even though they can be ignorant of the struggles the other races have felt, they would die in a heartbeat if it meant they would be saving people.

It is not known if the Plane of Water is where the Aboleth hail from, but it is as good a place as any for them to exist and hunt. These massive psychic squids roam these vast waters consuming lesser creatures. They are a true danger in this deep plane. These beings are tough even when confined to smaller bodies of water on the material plane. Here they are truly in their element.

These beings claim to be as old as the Gods themselves, and often have cryptic knowledge of history that has been forgotten. They often make lairs and fill them with spoils that will help them in their twisted goals in an effort to inflict their will upon wherever they choose.

Does the Plane of Water have a Surface in 5e?

It does not, it is an endless expanse of water, the borders of which lead to the other elemental planes.

Are there islands on the Plane of Water in 5e?

Not a plane I often take my parties to. I always felt it didn’t really gel with the way I use maps. Maybe with those floating cubes, I’ve seen on RPG shows it would be more fun, but having a Z-axis really throws 2d combat through a loop.

Anyway, I really did learn a lot while researching this topic, and I hope you did too by reading. So until next time, I hope your day is a Critical Success!