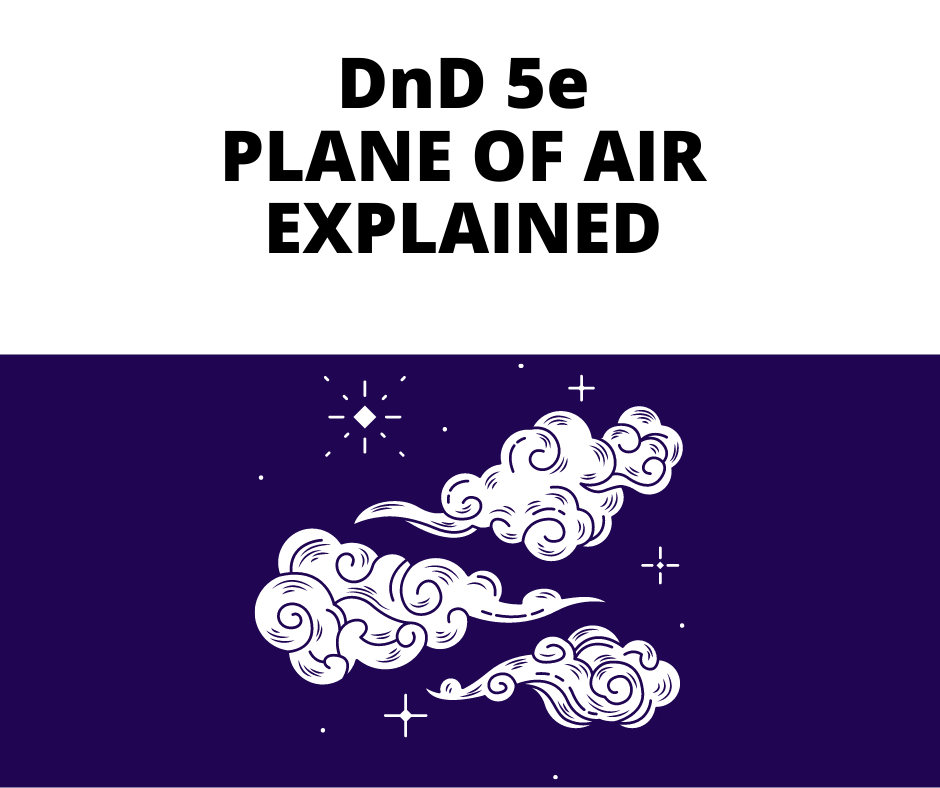 Hey folks! Another week another post, in this week’s post, DnD 5e The Plane of Air Explained, I’ll be continuing our series on the different planes of existence within DnD 5e. I’ll be going over some of the aspects of the Plane of Air that will blow you away (PUNS!).

So strap in, and keep the parachute at hand as we jump right into this week’s post!

What is the Plane of Air?

It really is what you might picture it as. It’s a big open expansive of almost nothing but blue sky and wind. However, due to the nature of the planes, and the way they can bleed into one another, this plane is often contaminated by the other elemental planes. These contaminations are lumps of matter from those other planes. So sometimes water will come through from the plane of water, and mix with smoke and form rain clouds within the Plane of Air, or grand chunks of land from the Plane of Earth, which is often where settlements are built.

The traversal of this plane is rather difficult, everything that dwells here has the ability to fly. Without that, it becomes a lot harder to traverse this plane. Travelers have been known to ride the air currents of this plane, but it is quite dangerous and without a guide, it is very hard to pull off. So the ability to fly is very much recommended.

What’s in the Plane of Air?

The plane is sparse with areas that are inhabited by any form of civilization. Small towns, even cities can be built on the matter that comes from the Plane of Earth, but they are few and far between. However, there is at least one notable location here which I will describe below.

The Citadel of Ice and Steel

This large fortress is home to the Djinn of this plane. It is the place of business of all of the Djinn, ruled by The Great Caliph and their court. The Caliph would collect taxes and make decrees from this seat of power.

Who’s in the Plane of Air?

Like with all the Elemental Planes, this plane has creatures made entirely of the essence of this plane. These beings while on this plane are almost completely invisible, gusts of wind that are sentient. I would caution any creatures who come here to stay on the good side of these elementals, as you don’t want to find yourself falling through the Plane of Air for the rest of your miserable existence.

These powerful beings have their seat of power here, dwelling and working out of The Citadel of Ice and Steel. They are capable of great and powerful magic, some even able to grant wishes, assuming the legends are true. They are known tricksters and do very much like to make bargains with mortals to their advantage.

These creatures can be found on both the Material Plane and the Plane of Air. The top half of their body resembles that of an eagle and the bottom half a horse. They are quite big and some have been known to exist within the Plane of Air. No one knows if they are native to that plane or if they have been brought there by other means.

It is said that THE platinum dragon had a seat of power here. It is unknown if Bahamut still resides here, as he is likely able to traverse the planes with ease, if not create his own demi-planes. However, the citadel here has been confirmed to have once been lived in and created by him, so may likely contain treasures, trinkets, and tomes.

How do you get to the Plane of Air in 5e?

Through the typical means. Either via planar travel spell or via the portals in the Ethereal plane. There are also ways to get to it via the other elemental planes, as they bleed into one another near their borders.

What happens if you fall in the Plane of Air in 5e?

It is said that you would continue to fall until you perished from starvation, or landed onto something solid that has come from one of the more tangible elemental planes. Some theorize that if you fell for long enough, you would reach the border between the plane of air and the plane of earth, and likely explode due to the impact unless you had a way around that of course.

As always I hope you learned as much as I did research this topic. The Plane of Air has always been a weird one to me. With little to no real means of travel, I would say every Dungeon Master would run this plane differently. It might effectively be completely uninhabited, or beings may have found ways around the inhospitable aspects of this plane. Either way, it gives the GM a lot of room for their own spin.

So until next time, I truly do hope your day is a Critical Success!