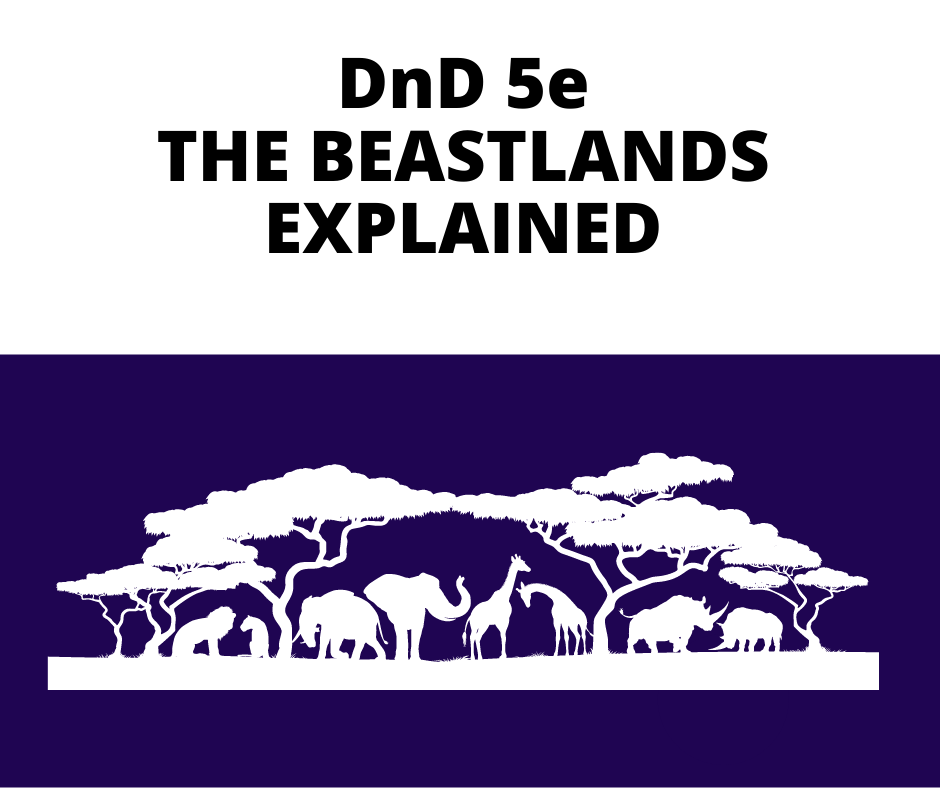 Afternoon folks! In today’s post, DnD 5e The Beastlands Explained, I’ll be covering this wild plane of existence. The Beastlands are considered part of the Outer Planes, much like Elysium. Think of The Beastlands more akin to heaven for good-aligned animals.

With all that said, let’s dive right into these wild and untamed lands.

What are The Beastlands?

The Beastlands are the beast equivalent of Elysium. In the simplest terms, it’s the afterlife for all the good beasts. It has been said that when a good and loyal beast dies, its soul is transferred to The Beastlands, and it takes on a Celestial form of what it was in its past life. They also gain extra intelligence, which allows them to communicate using the Celestial language. So the game between predator and prey is one that has a new dynamic because of shared language.

The Beastlands are made up of three main layers, Krigala, Brux, and Karasuthra, all of which support massive numbers of beasts, and each has different climates and times of day that support all these different walks of life.

While there is plenty of life, there is very little in the way of civilization. As most who decide to live here “wish to live with the trees and not against them” to quote The Manual of The Planes. Beings who have died and their souls transported here tend to believe in being truly free and good, not shackled by governments or power structures.

What’s in The Beastlands?

I mentioned above that there are 3 layers to The Beastlands, Krigala, Brux, and Karasuthra, which have different aspects which allow them to support different forms of life.

This is the topmost layer of The Beastlands, the massive River Oceanus flows through the middle of this entire layer. The river tends to divert and take different paths, so small lakes, and canals are formed as the river diverts through the lands.

It is forever a sunny afternoon on this layer, time does not change on the layers, staying constant and at the appropriate temperatures for the beasts and plant life that exists there. The passive of time is observed through rolling winds and rains that come once a day.

This layer is also home to two deities, Skerrit, the Centaur Deity, and Ehlonna, The Deity of the Woodlands. Both of them exist on Krigala as well as their petitioners. Both have the ability to influence this realm at will, so out of the ordinary events can happen due to the will of the divine. Skerrit lives within the location known as Skerrit’s Glade, and Ehlonna exists in an area known as The Grove of The Unicorns.

This is the middle layer of The Beastlands. This land is in an eternal twilight, the sun is low in the sky, and the moon can be seen on the opposite horizon. Having a cooler climate than Krigala, it allows for creatures who prefer early morning or just before sundown as their time to forage and hunt.

Interestingly it is said that getting lost in Brux is a hard task, as the various water sources, be they ponds, lakes, marshes, bogs or swamps are all fed by The River Oceanus, so following them will eventually lead you back to The River.

This is the bottommost layer of The Beastlands a land of eternal night and shadow. The thick canopy barely letting light through to the forest floor makes this place very dangerous. This layer is home to some of the most dangerous beasts that exist in the multiverse, which also makes it an unfortunate hunting ground for trophy hunters from other planes of existence.

Who’s in The Beastlands?

While there is a lot of life, I did mention not a lot of civilization exists, there are small pockets of it, however, but not a lot in the way of towns and villages, more akin to druidic groves and communes.

Ehlonna, Goddess of the Woodlands

This deity is often depicted as a woman of either Elven or Human descent. She is typically aligned heavily with sylvan creatures such as Unicorns, hence the name of her domain being The Grove of The Unicorns. Her teachings are that what nature gives us are gifts, that they should not be stolen. Her followers are often vehemently against hunting for profit or fun.

Skerrit, God of the Centaurs

This deity unsurprisingly is also a centaur himself. He is equivalent to a lot of the various good-aligned Gods of the hunt/nature. He is described as being benevolent and compassionate. He is said to be an extremely skilled hunter and protector. He is said to maintain the balance in forests, granting the hunters prey, and also fed the hunted.

What is The Beastlands in DnD 5e?

To really sum up the post, The Beastlands are effectively bestial heaven. Where good-aligned beasts go when they die to become celestial versions of themselves. They get to live in the afterlife in their own perfect climates. However, they are not immortal here, so the circle of life still plays a huge role here in terms of the hunter and hunted, prey and predator.

How to get to The Beastlands in DnD 5e?

There are portals that exist that allow for travel to The Beastlands via Elysium and Arborea. However, as always, a powerful magic user should be able to get there via Plane Shift or similar spells that allow for extraplanar travel.

As always folks, I hope you learned a little about this super interesting place. I for one cannot wait for my players to venture here and experience a wild location with animals that share a common language. The situations that could come up with just that alone make my creative juices flow.

Anyhow, I look forward to journeying and investigating the next plane of existence in the next post, so until then, I hope your week is a Critical Success!