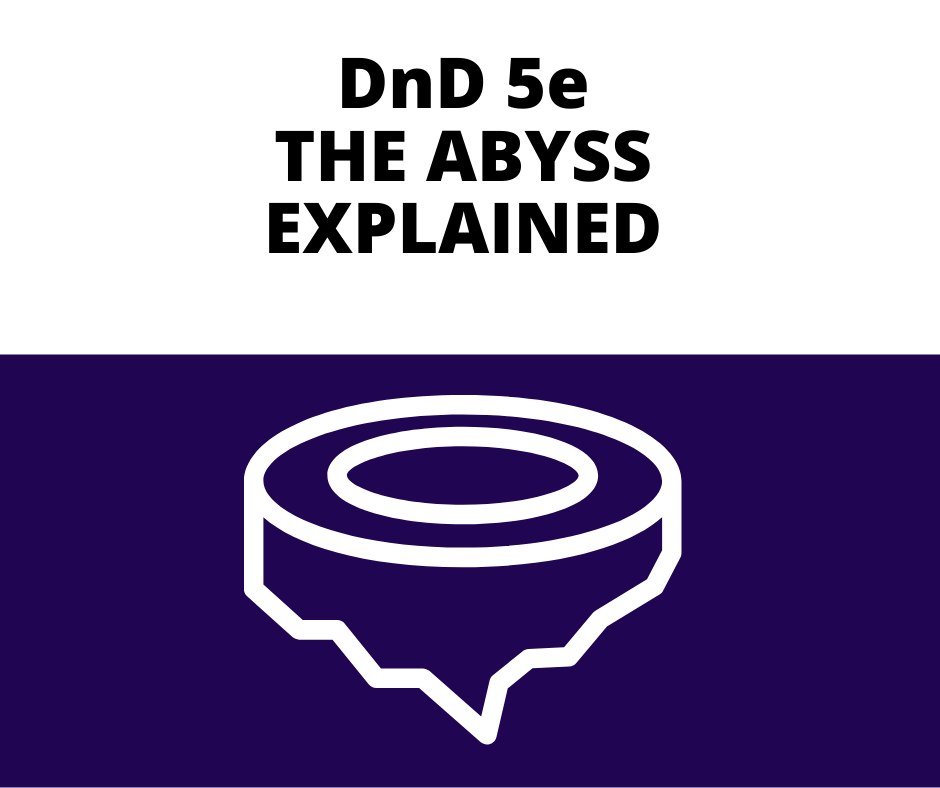 Afternoon folks! In this week’s post, DnD 5e The Abyss Explained, I’ll be covering this fairly expansive plane of existence. Of course, I won’t cover absolutely everything, as that would be an enormous post, so I’ll only cover a couple of the interesting locations, and beings that reside here.

So make sure you take some brave pills as we dive into The Infinite Abyss!

What is The Abyss?

A plane of pure unfiltered evil. The home of Demons. It is said that The Abyss is infinite in size, some contradict this and say it has 666 layers, some say there are more, and no one truly knows the depths of this repulsive plane.

Since there are so many layers to this location, there is an immense amount of verity to the landscapes here. The layers are typically rather hostile and inhospitable for most mortal life. It is also within these layers that powerful creatures and evil deities can be found, residing within their kingdoms of immorality and destruction.

It is also from this plane that the Demons build for the Blood War with the Devils of the Nine Hells. Some layers are massive battlegrounds where parts of this war is waged. Some layers are the domains of powerful demons, sometimes known as Abyssal Lords. There is also the faction known as the Tanar’ri which is effectively the ruling class of Demons, across many of the layers of the Abyss.

What’s in The Abyss?

There would truly not be enough time to encompass all of the Abyss, so I’ve picked out a few places that seem interesting and relevant to the overall power structure within the Abyss and the powerful entities which reside within.

This layer sits at the top of all the layers of the Abyss, layer number 1. It is a desolate landscape, like a barren desert. The great red sun here never wavers, always hanging in the sky cooking the lands beneath.

There is not much to see here, bar a few things, one of those is the massive iron strongholds typically ruled by the Tanar’ri. The River Styx also flows heavily through this layer. However, the most important aspect of this layer, is the massive pits in the ground.

The pits in the ground lead to deeper layers of The Abyss, much like how portals work, after traveling down them for a period of time a creature will be transported to whatever layer that pit is connected to. There is no way to know where these pits will take you, without some kind of guide or prior knowledge. Be aware that jumping into one of these pits is akin to a suicide mission, as many of these “portals” can be one way.

This location is a town within the Abyss, it serves as a hub for beings that wish to become mercenaries for The Blood War, or those brave enough to venture into The Abyss to explore. Why anyone would want to do either is beyond me.

The town is run by a succubus mage known as Red Shroud. The town contains a portal to another town called Plague-Mort, in The Outlands which is another plane of existence separate from The Abyss. Its inhabitants are mostly made up of all the different kinds of Demons as well as petitions who have been taken as slaves, and a small smattering of mercenaries from the Material Plane.

This layer shares its name with the Greek God of Death. Thanatos is known as the 113th layer within The Abyss. It is a realm that contains many undead beings. The freezing landscape is made up of clusters of small graveyards and crypts. While the layer has a heavy undead focus, there are still many demons that make up the population of this layer.

The city of the dead, and the home to one of the most notable deities in DnD, Orcus. The design of this city is taking the architecture of gothic mausoleums and made that theme span across a city. Massive gothic structures, crypts, and tombs are dotted around here as much as you would see a Starbucks in any major city in the world.

The city itself is populated by undead of all kinds and even some that might be rare or even non-existent on the material plane. Vampire Giants for instance was one I had seen mentioned which made me kind of shiver.

Layer number 66 of the Abyss. It is said this realm resembles that of a massive spider’s web, and it is also home to another of DnD’s well-known deity, Lolth, the Spider Queen. Here there are complex tunnels filled with a web that all interconnect, some within the plane, some leading to other planes or layers where Lolth is held in high regard. Lolth herself is said to reside within a massive iron fortress shaped like a spider, that is said to crawl around the massive weblike layer.

Layer 88 of the Abyss. Home of another one of the most popular entities in the DnD lore, The Demogorgon, who is said to be one of the most powerful Demon Princes. The layer itself goes by two names, The Brine Flats is the layer itself, but Demogorgon’s palace resides here which is the namesake of the layer, Abysm. The only parts of the palace that can be seen from the Brine Flats are two massive snaking towers, which is where Demogorgon uses his immense arcane abilities to pilfer the secrets of the Abyss. The rest of Abysm is actually beneath these towers, deep under the waters of the Brine Flats, it is said that light has never touched these tunnels and caverns.

Who’s in The Abyss?

Since The Abyss is said to have infinite layers, it also contains many different beings and creatures. I’ll go over a few that I think are interesting.

Of course, every Demon within all the sourcebooks can be found here. From Quasits to the beings that are said to rule The Abyss. Demons typically are out for themselves or those they worship, there is no real hierarchy like there is in The Nine Hells, sheer raw power is what keeps you at the top in this place.

So Demons have no room for parley or deals, but in the right circumstances if they think it will benefit them, may be able to be bargained with, but they should never truly be trusted.

Most souls that come here from the Material Plane are simply turned to energy and absorbed into The Abyss itself, however, some of those that manage to avoid that fate are instead twisted into being called Manes, these lowly creatures are gaunt with pale skin and sharp claws and fangs. It’s said that you can visibly see maggots and other beasties crawling under their skin.

If a Mane serves well and for a long time, it’s possible for them to be promoted to a lesser demon, which allows them to start moving up the food chain of the demons.

Known as the Prince of Demons, he resides on layer 88 of the Abyss known as Abysm. Where he resides trying to use his arcane prowess to unlock deeper secrets of The Abyss. His title as Prince of Demons is self-allocated, but none who challenge him are able to defeat him and take this title.

The interesting thing about Demogorgon is that while he is immensely powerful his biggest weakness is his split personality. He has two heads on his body, each with its own personality and reactions to events. This causes Demogorgon to fight with itself, and it can become paralyzed to some degree when overwhelmed.

The left head Aeumal wishes to be free of the right head, Hethradiah, which is the more reactive and animalistic head. Aeumal is the opposite, he is cold and calculating, creating plans and executing them to a tee. It is said that this dual nature is what prevents Demogorgon from ruling over all of the Abyss.

The deity of the Beholders resides on layer 6 known as the Realm of a Million Eyes. Here The Great Mother, a gargantuan Beholder roams the caverns. It is said that the tunnels here are filled with eyes that she is able to see through.

She is supposed to be so intelligent that she seems insane. Even to other beholders and her worshipers, the knowledge which she possesses is so complex it cannot be shared with anything of less intelligence than her.

The deity of the Drow resides in the 66th layer of The Abyss, known as The Demonweb Pits, a great cavernous layer that when mapped out resembles that of a massive spider’s web. It is said she once roamed this webbed plane in a massive mobile fortress shaped like a spider.

She is said to be cold and cunning. Although through her sordid past she has become more unhinged in her commands to her followers, some even say that she is effectively insane, demanding contradictory things from her worshipers.

However, those most loyal and understanding of her nature realize it is not loyalty she values most, but ambition, even ambition that flies in her own face. Those who impress her with ruthlessness will earn her favor.

As mentioned in the section about Thanatos, Orcus is a powerful and old deity. One that has come close many times to causing true unparalleled chaos on the material plane. He is known as the Lord of the undead.

His goal is to end all life, he wants to be the last one left within the Cosmos, ruling over all the undead that would take their place. He is a true agent of chaos, granting favours, deals, just to sow the seeds of chaos which he can take advantage of at a later stage.

He has all the time in the world to accomplish his goals, so allowing a powerful mage on the material plane to wreak havoc using powers he has granted them for a few hundred years is nothing more than a moment to him. Eventually using all those who worship him or seek him as a means to his ends.

What is The Abyss in DnD 5e?

To sum up the post, The Abyss is a unique Plane of Existence that revolves around chaos and evil. It is the home of Demons and thus the home of many powerful entities, some of which are extremely well known in the DnD universes.

Is The Abyss infinite in DnD 5e?

It is said to be, and most likely is ever-expanding. In truth, it is truly unknown if there is a point at which the layers stop, but there has been no evidence to prove that it does.

So that’s The Abyss! A wild plane of existence that you’d have to be crazy or desperate (probably both) to visit. Most likely if you are going here, it’s for a very specific purpose. If you’re GMing this plane, you should be really hitting home about the danger of this place, how hostile it is to outside life, and the fact that extremely powerful entities call this place home. This is no mere dungeon delve, for most being noticed would be akin to death.

As always I hope you learned a little with this post, I had some knowledge of The Abyss, but never truly knew just how many deities and entities called this place home. It’s also a very malleable place to use as a GM as there are so many layers that are undocumented, you could really do anything with it. So until next time, I hope your week is a Critical Success!