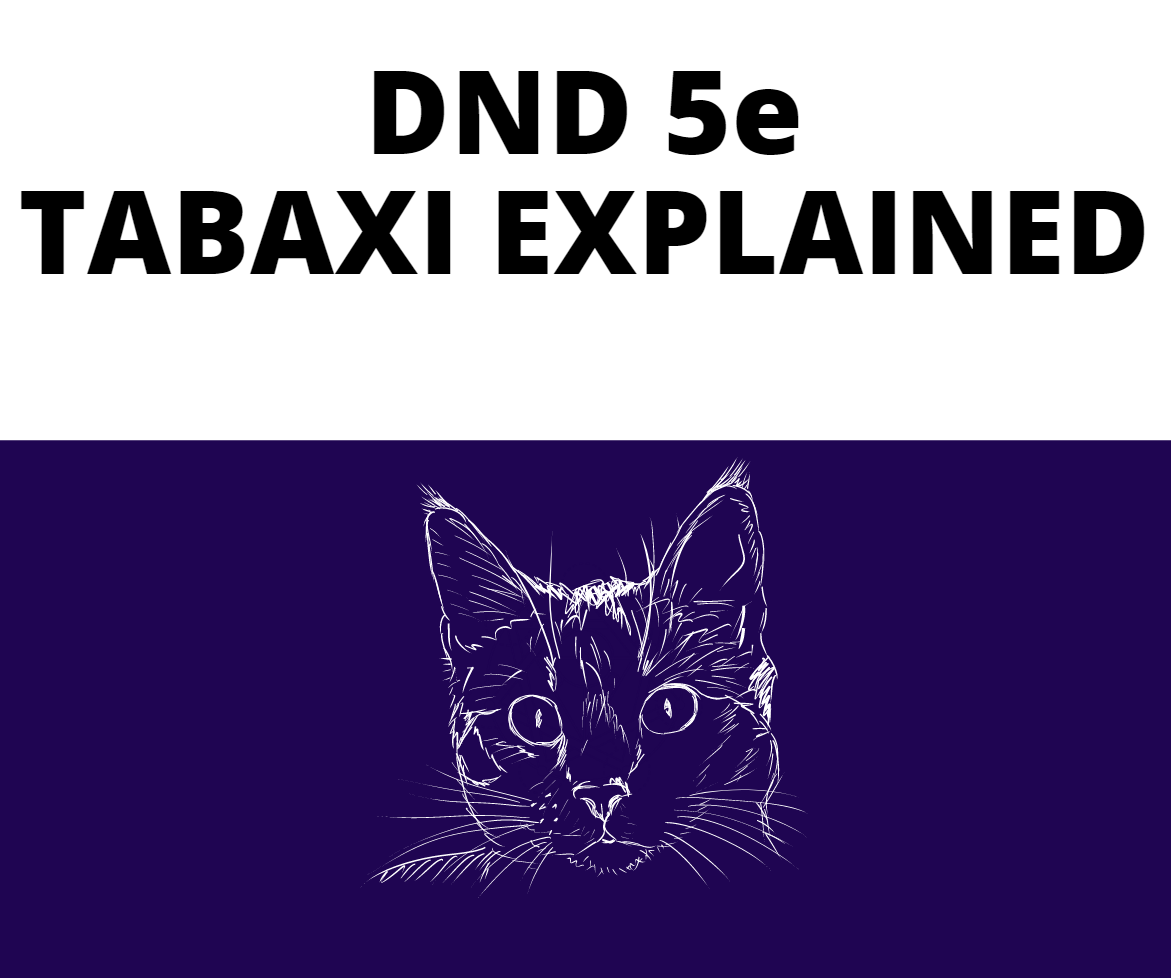 Good evening folks, today’s topic is going to be, DnD 5e Tabaxi Explained. If cat people are your thing, then this playable feline race is sure to be right up your alley!

First, we’ll go over what exactly the Tabaxi are, then go over their mechanical aspects, and lastly, I’ll answer some of the questions I see popping up about the Tabaxi.

So take some catnip, and settle in as we dive into the post.

In DnD 5e the Tabaxi are a playable race of creatures. The details for which were officially published in the supplement book Volo’s Guide to Monsters. The entry in this book lays out a bunch of the background lore to help players and GMs alike flesh out their Tabaxi characters.

The gist of the race is that they are cat-like humanoids. If you’ve played any of the Elder Scrolls games, they’re pretty much akin to the Khajiit.

As for their personality, Volo’s depicts them as “the ultimate travelers”. They are driven by a strong sense of wanderlust, and a thirst for knowledge that would make the Goddess Ioun smile.

It’s also said that they typically are isolationists, but their thirst for knowledge of the world keeps them from being ignorant. It would also seem that they are typically introverted as well, keeping in small tight clans.

Material gain is not something that often interests a Tabaxi, they would rather spend their gold learning and experiencing the world and the stories people have to tell.

As a Tabaxi you gain a decent selection of character traits that will help you along your journey.

Age – Same as humans, reach adulthood in their late teens, and rarely live longer than 100 years.

Alignment – They are more chaotic aligned; however, they tend to lean away from evil.

Size – They are generally taller than humans, but quite lithesome.

Feline Agility – Tabaxi can double their speed until the end of their turn. They cannot do it again until they spend a turn not moving.

Cat’s Claws – Tabaxi have a natural climbing speed of 20ft, and can attack with their claws. Dealing 1d4+ Str on a successful attack.

Cat’s Talent – Tabaxi have proficiency in both Perception and Stealth skills.

Languages – They can speak/read/write common and one other language of choice.

Which book Has Tabaxi?

The book that contains the official stat block for the Tabaxi is Volvo’s Guide to Monsters.

What is the best class for a Tabaxi?

This is a pretty hard question to answer, but typically I’d say either rangers or rogues would synergise pretty naturally with the Tabaxi in a mechanical sense. However, due to their lore you could really be anything.

Are Tabaxi proficient with their claws?

Yes, any creature is considered proficient with their unarmed attacks. Same with a Lizardfolks bite attack.

Yes, they can. Tabaxi can naturally climb thanks to their claws. They have a natural climb speed of 20ft.

Can Tabaxi have hair?

In a way yes. Of course, Tabaxi are typically furred creatures, their fur may be thicker on their head, allowing them to style that area of fur in any way they so desire.

As always I hope you all found this post helpful, and that you enjoy the new FAQ section of our posts here at TheGMSays. The Tabaxi are a fun race, and I know many people who were pleased with their addition to the game.