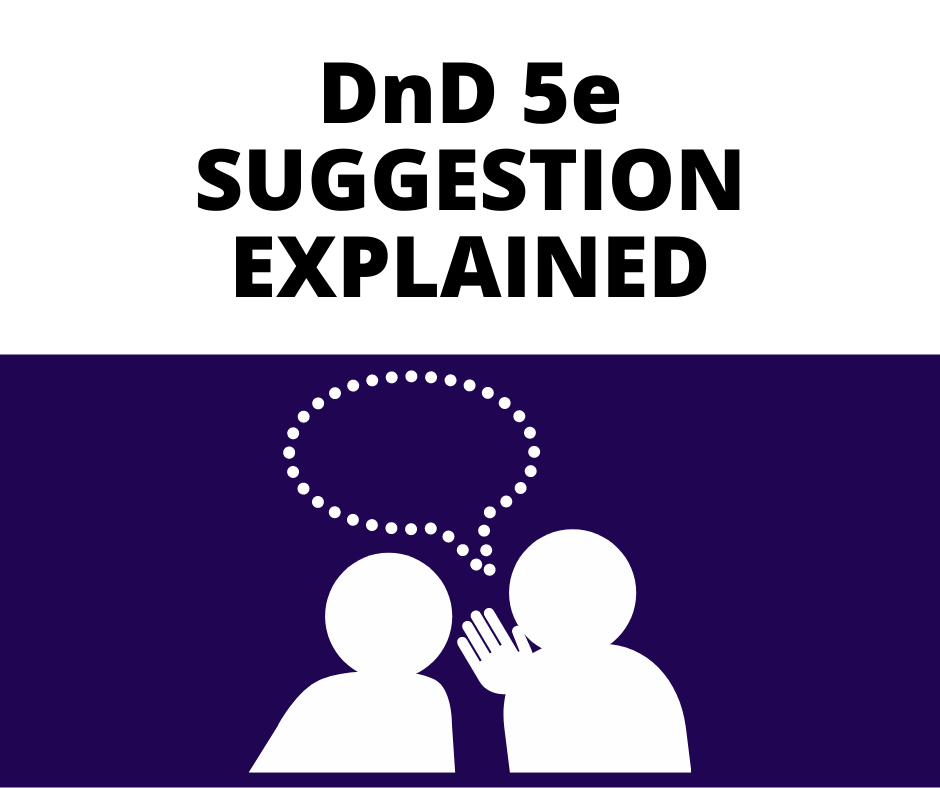 Hey folks, welcome to another post! In today’s post, DnD 5e Suggestion Explained, I’ll be going over this intriguing spell. First I’ll go over what the spell is and does, then how to use it, and finally answer some questions surrounding the spell itself.

So I suggest you sit down and get ready to jump right into this week’s post!

Suggestion is a 2nd level Enchantment spell. That caster casts it on a target up to 30 feet away. It is a concentration spell that lasts up to 8 hours. It can typically only be used by Bards, Sorcerers, Warlocks, and Wizards.

Once the spell is cast, the target must make a Wis Saving Throw, if they fail the caster can give them a task/order and they will attempt to complete it to the best of their ability. The casters cannot tell the target to do anything directly harmful, otherwise, the spell ends.

How to Use Suggestion

There are a plethora of creative and interesting things you could have a target do. You could make a guard drink until he was sick, thus getting rid of a guard. Or you could make a target dig a hole for 8 hours while your party gets a much-needed rest.

Basically, the way I’d use it, is that it’s useful for either keeping a target in a specific place for 8 hours or getting rid of someone for even longer if you get them to travel far within the duration of the spell. For instance, the party could be getting tracked by someone, and if they didn’t want to fight in the middle of a city, they could use Suggestion and get the person tracking them to hop onto a boat, that would put some serious distance between the party and them.

With these kinds of spells that are so open to creative flairs it’s difficult to cover every angle, but just try to remember the golden rules, they can’t directly harm themselves, and the orders can only be about a sentence or two in length.

Is Suggestion a good spell in 5e?

I think so. It highly depends on your ability to come up with creative solutions to the issues your character faces. Overall it is quite a niche spell, and it also takes up your concentration for the duration, so that is quite a price to pay. I think the spell has its place, in the tool belt of any creative arcane practitioner.

What is reasonable for Suggestion in 5e?

As mentioned in the article, something like telling a target to “dig a hole for buried treasure” is a great way to keep someone in the same location for 8 hours. Also telling a target to get on a boat could land them in the middle of the sea by the time they come around.

Are Undead immune to Suggestion in 5e?

I like this spell, I really do, I’ve seen some amazing applications for it, and some really awesome outcomes, however, it does typically require a quick wit to think on your feet in a situation to use it to its fullest. So as always I hope you learned a little about the spell and will use it in your games. Until next time, may your day be a critical success!