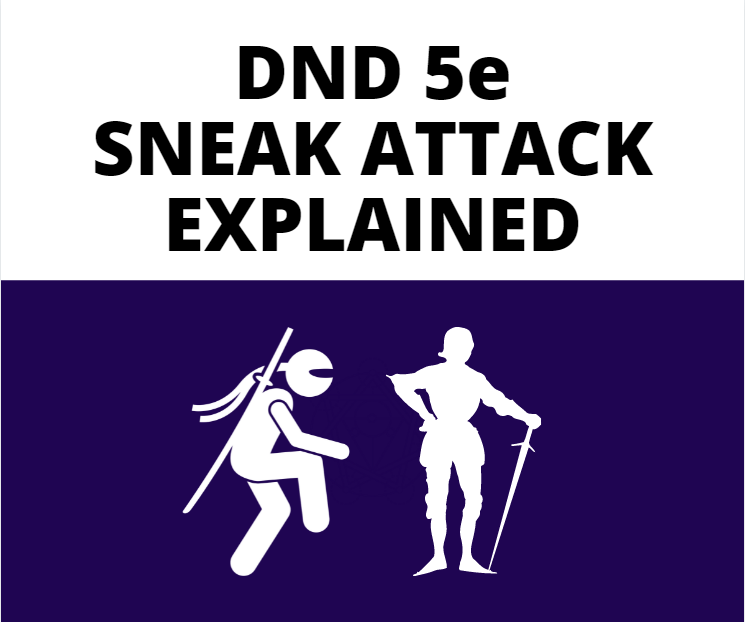 Hey folks! Early post this week due to some health-related stuff coming up this week for me. All’s good, so don’t worry! In this week’s post, DnD 5e Sneak Attack Explained, we’ll explain this elusive mechanic, first go over how it works, then answer common questions.

So keep your eyes peeled as we answer the questions on this sneaky feature and dive into the post!

First off Sneak attack is a feature only available to the Rogue class in DnD 5e. They gain access to it at 1st level, so it’s available as soon as the character is created. It allows for extra damage to be dealt by the rogue when the attack meets certain conditions.

Every single time I’ve had a Rogue in my DnD campaigns this is a rule that quite often needs to be reiterated again and again. For some reason, it seems to slip people’s minds, so I’m hopefully going to quickly sum it up for you.

Basically, the way this works is, once on the rogues turn, they can deal 1d6 (increases as they level up) extra damage to a single creature hit with their attack. To apply this damage, they must meet one of the following conditions: –

Does Sneak Attack Give Advantage in DnD 5e?

Not by itself, it doesn’t. You can gain advantage in many ways in combat, so utilize those to gain advantage to allow sneak attacks to take place. Alternatively, and probably more likely to be used, have an ally be within 5ft of the target, to bypass the need for Advantage.

Yep, just like any other feature, spell, or item that adds additional dice to an attack.

Is Sneak Attack Once Per Turn in DnD 5e?

Yes, a Rogue can only use Sneak Attack once per turn.

Can you Sneak Attack Undead in DnD 5e?

Nothing prevents an Undead from being Sneak Attacked. In fact, to my knowledge, nothing in the game can prevent sneak attack, since it doesn’t have any requirements for it to work, other than what’s listed above.

Well, that’s Sneak Attack in a nutshell. Really it’s a pretty simple feature in DnD 5e. I think people just get confused and mix it up with the Assassinate feature available to some Rogues.

Just make the Rogue in your party write the explanation I wrote out above 50-100 times and I’m sure they’ll ingrain it into their minds! (Joking of course)

As always, I hope the post helped, and I hope they continue to help in the future as well. So until next time, may your day be a Critical Success!