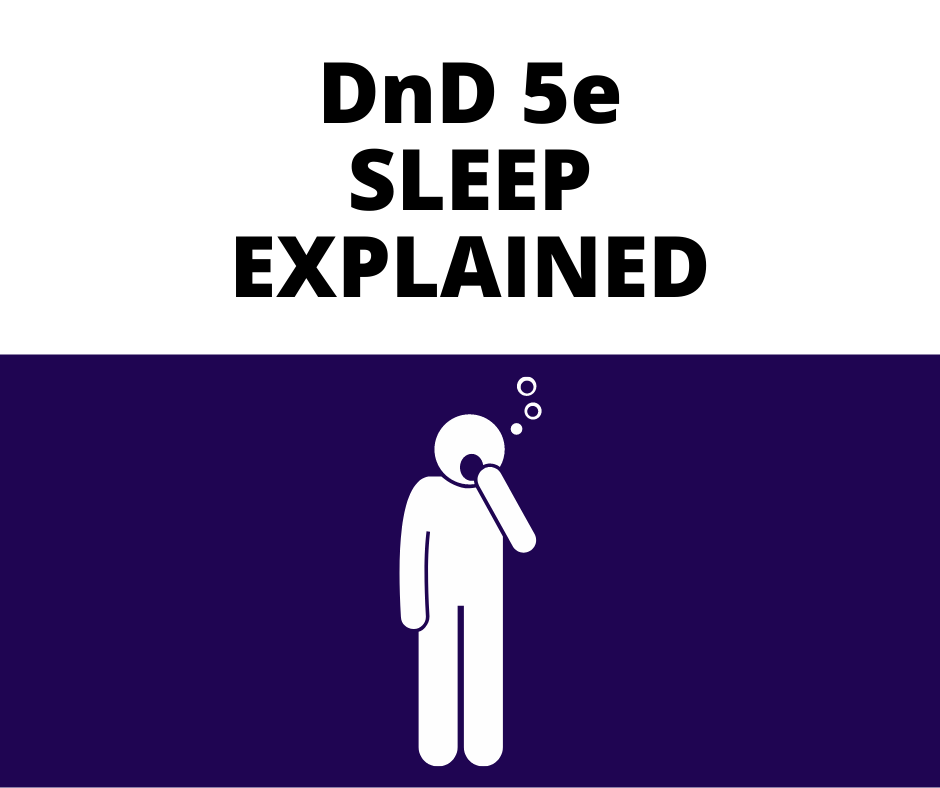 Happy weekend folks! In today’s post, DnD 5e Sleep Explained, I’ll be going over this sometimes overlooked spell. First I’ll go over how it works, then how to use it, and finally I’ll over some of the questions the come up around this spell.

So don’t sleep on this post, because you’ll miss out on a powerful low-level spell, so let’s dive right into it!

How does Sleep work?

In DnD 5e, Sleep is a 1st level Enchantment spell. It takes 1 action to cast it and it can be cast up to 90ft away from the caster. It lasts 1 minute, and can typically only be used by Bards, Sorcerers, and Wizards.

Effectively what this spell does is forces other creatures to sleep. It does so in an interesting way. When the spell is cast, the caster rolls 5d8 and then will mark down the total from the roll. Then the caster picks an area with a radius of 20ft, and any creatures in that area are affected by the spell unless they are already unconscious.

Using the total from the previous roll, the GM subtracts the current total from the hit points of the creatures affected, starting with the creature with the lowest hit points. If the outcome of the subtraction is equal to or greater than the current hit points of the target, then the target falls asleep until the spell ends. Anything leftover from the initial roll carries over to the next lowest hit point target and that repeats until there is nothing left from the roll of the Sleep spell.

Keep in mind this cannot be used on undead or creature’s immune to charm effects.

How to use Sleep

Sleep is very powerful early on, especially if you’re not fighting undead frequently. The pool of hit points from a roll of 5d8 can be quite sizable. It’s good in a lot of situations, you just have to have a decent idea of how beefy (IE how much rough HP a target(s) may have) the creatures are.

You could send a low-level boss creature to sleep pretty easily, or even a group of their minions, allowing the party to outnumber the boss creature. It can be used to flee from combat by putting large numbers of weak enemies to sleep.

Between levels 1-5 I’d say is where Sleep can shine, after that it doesn’t scale nearly as well as many of the other spells. It can be upcast, but I reckon you’d be better off using a higher-level spell than upcasting Sleep.

Does Sleep affect your party in 5e?

Yep, sure does. So be careful where you aim.

Does Sleep work on yourself in 5e?

Similar to above, Sleep does not allow you to pick who in the area you designate is affected.

Are Elves Immune to Sleep in 5e?

Yes, they are. Part of the Elf racial abilities is that they are immune to magical effects that make them sleep.

Does Sleep make you unconscious in 5e?

It does indeed. Magical sleep and normal sleep are no different other than magical sleep is forced upon a creature, usually.

As always I hope you learned a little about Sleep spell, and I hope you can take that knowledge into your own games. I think the Sleep spell is a really good one that can be overlooked since it doesn’t actually do damage, but early on, it’s a no-save spell with a large pool of HP to use. Creatures early on in the game are not that tanky, so it can be super useful.

So that’s it for today’s post, and until next time, I hope your day is a Critical Success!