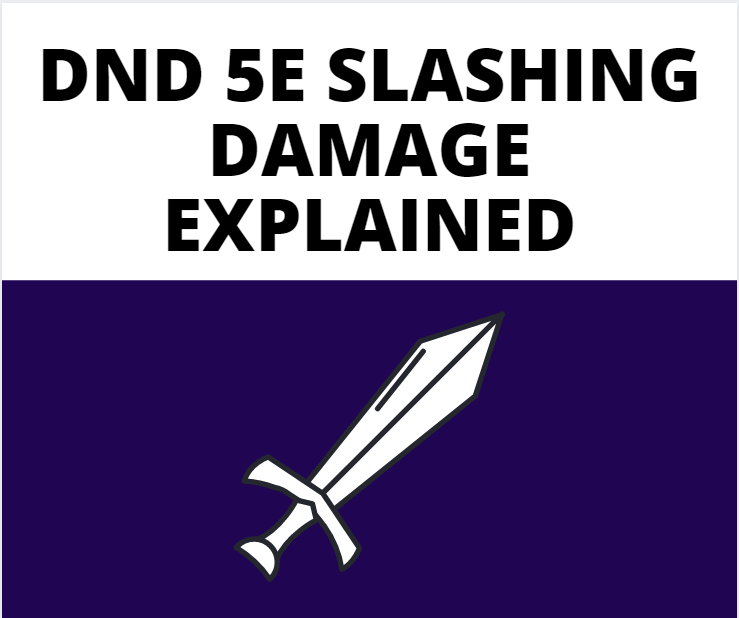 Hello again! Welcome to today’s post, DnD 5e Slashing Damage Explained. In this post, we’ll be taking a look at how slashing damage might show up in your games. We’ll look at some specific creature and spell examples then finish up with a quick note on what it looks like, and how to describe it.

So without further ado, let’s have a look at slashing damage.

A lot of creatures have the ability to inflict slashing damage since anything with claws or an edged weapon can inflict it, which is a fair amount of the creatures in the game. Similar to the other mundane damage types (piercing & bludgeoning) there aren’t many magical sources of slashing damage, but there are some.

So let’s look at some specifics.

So in 5e, slashing damage primarily comes from creatures. As mentioned above, anything with claws or a sword can cause it. Due to the number of creatures that can inflict this damage, I’ve just picked some interesting creatures, so let’s see what we have.

Flying Swords are a creature in 5e that are “constructs” so inanimate objects brought to life by magic. Of course, being that they are animated longswords their only source of damage is slashing damage. So when they attack they can deal 1d8 slashing damage.

Of course, we also have creatures that can slash with their natural weapons.

Cloaker’s are interesting creatures, they are creatures that hunt in caverns and deep caves. They hide in plain sight, looking no different than a regular leather cloak, when motionless. They can grapple onto the heads of their target and blind their targets while doing so. They can also create duplicates of themselves to act as decoys while they attack, making them pretty tough opponents if they manage to get the jump on their targets. However, their tail attack deals slashing damage, as it’s got a sort of barbed tail, which rakes across their targets, dealing 1d8 slashing damage.

One of my favorite creatures that can deal slashing damage comes from the depths of the nine hells.

The Pit Fiend is a pretty iconic creature from DnD. They are pretty much at the top of the pecking order in the nine hells, only being outranked by actual archdevils. They are insanely powerful, having access to innate spellcasting (meaning they don’t use spellslots). They also have truesight, meaning they can see invisible creatures and also a creature’s true forms. Their claw attack is what deals slashing damage, their claws can cut open a creature dealing 2d6 slashing damage.

In 5e there aren’t too many spells that can cause slashing damage. So I’ve just grabbed the ones that can inflict it, I’ve tried to keep it as varied as I could.

Blade Barrier summons a massive wall made of magical blades. The wall can be 100-feet-long, 20-feet-high, and 5-feet-thick. When a creature enters this wall of blades or starts its turn inside the wall, it must make a Dex saving throw, on a fail it takes 6d10 slashing damage.

A lot of the spells that cause slashing damage seem to be about summoning weapons capable of causing slashing damage, like the above spell, as well as the following spell.

Cloud of Daggers summons a 5-foot-cube of magical daggers. If a creature enters this cube or starts their turn there they take 4d4 slashing damage. Interestingly they don’t get to make any save for this, it’s just straight-up damage.

We also have spells that can change a creature, and make them capable of dealing slashing damage naturally.

The Alter Self spell while having other aspects to it, one of the things it can do is give a creature natural weapons. This means that the target of the spell can grow claws, fangs, horns or even a barbed tail. This allows them to be capable of making an attack with their new claws on their turn, dealing 1d6 slashing damage. It also has the added benefit of being considered a magical weapon, as well as giving a +1 bonus to the attack and damage rolls.

It’s a pretty simple damage type to conceptualize, everyone has likely cut themselves at some point in their life, even it if was a paper cut. I tend to make sure I use phrases that emphasize the source of the slashing damage.

So say for example a Death Knight was to attack a player with its longsword, this is how I’d describe it.

“The Death Knight spots you from across the battlefield, it grips its long worn ornate blade tightly in its skeletal hands. You see it’s glowing eyes flash in intensity, as it runs towards you, longsword trailing just behind it. It swings its sword upward with a mighty force and you feel it cut through your simple armor, and slice open the flesh beneath, then another strike comes in from above using the momentum of the previous attack, followed by a final swing, you feel the blood dripping from each wound as it saturates the clothes beneath your armor. Each wound burns as death energy seeps into the wounds from the attacks. You take 30 slashing damage and 54 necrotic damage.”

Again, as always I hope this post helped you understand this damage type, where it can show up, and give you some ideas on how to describe it when it does show up. Thanks for taking the time to have a read through this post, and until next time, may your day be a critical success!