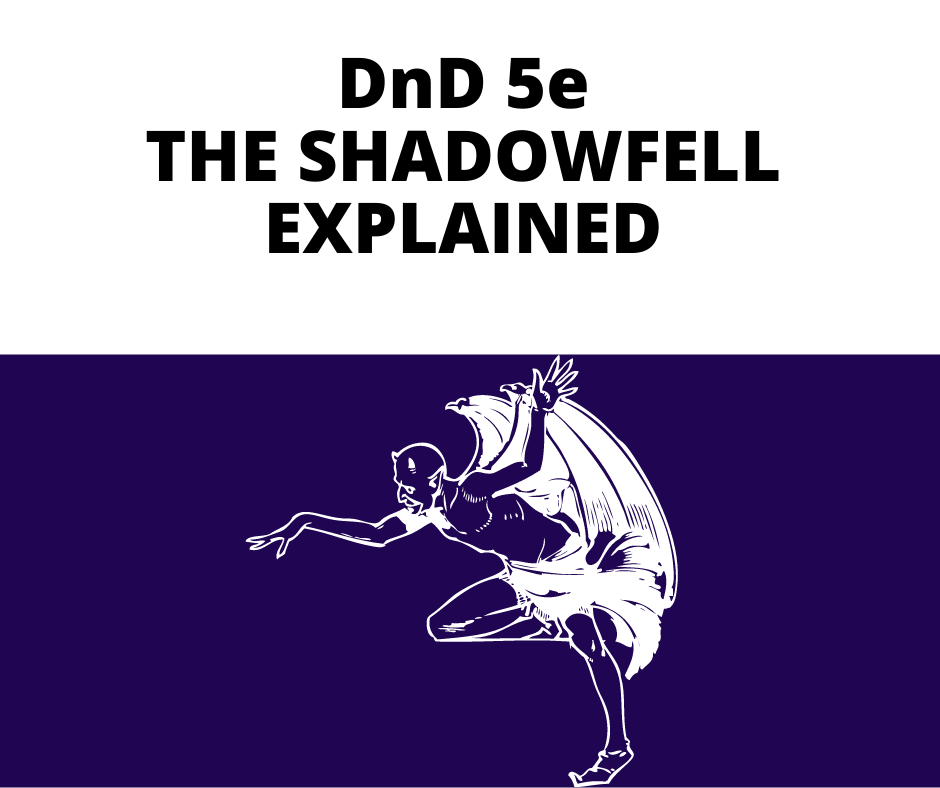 Hey folks, I hope you all had a good festive period and a great new year! So in 2022 for TheGMSays I’m hoping to continue the series on the different planes of existence. This year I want to experiment a little more with content, so we’ll see how that plays out. Never fear though! I will aim to always post the main article at least once a week.

Okay, now that we’ve got that out of the way, in today’s post, DnD 5e Shadowfell Explained, I’ll be attempting to explain this desolate land, the negative mirror of the material plane. First I’ll go over the general vibe of the plane, then I’ll cover locations of note within the plane and finally any inhabitants it may have.

So try and keep your emotions in check as we dive into today’s post!

What is the Shadowfell?

What’s in the Shadowfell?

While the Shadowfell is described as being pretty desolate, there are still a number of things that exist in this plane. Towns and Cities are present, however as with everything else, they tend to exist in the same places as their material plane counterparts, but again, twisted. Maybe where a holy city exists in the material plane, an unholy counterpart may exist in the Shadowfell. These are just some basic examples of what might appear in your Shadowfell.

A city that was once abandoned by the Drow after the inhabitants were conquered by Shadow Dragons. It has now been since re-established by Drow who claim to have the blood of Shadow Dragons running through their veins.

A powerful city within the Shadowfell. Inhabited by the Drow who originally abandoned Chaulssin. Deeper beneath the crust of the Shadowfell, where the Shadow Dragons once called home is where this city is located.

A massive swamp that exists within the Shadowfell. Like everything else in this plane, it can shift location and may change various features, but the broad strokes are usually always the same. It is an extremely dangerous part of the plane filled with deadly creatures.

The swamp also has a location in it known as The Black Rift, which looks like a canyon in the swamp. Water runs down all sides of the canyons in a never-filling crevasse. One of the magnificent sights to see if one finds themselves able and willing.

This city was founded by beings known as Gloamings. These beings had an almost Dark Angel feel to them. Black wings, cat eyes, pale skin, the whole nine yards. Sometime after founding the city the five Gloaming families who founded it managed to create two portals to connect the city to the material plane and serve as a trading post between the two planes.

Who’s in the Shadowfell?

While this plane is sparse, it still holds a variety of different creatures that call the plane home.

These beings are fey-like creatures but molded by the Shadowfell. Similar to their fey counterparts in the Feywilds, these creatures look like pale elves. They typically keep to themselves, fending for survival in this inhospitable realm.

They are well suited to stealth thanks to living in the Shadowfell. However, they are also somewhat cursed by living here. When in their home realm, a Shadar-Kai will take on a more twisted form, making them look aged and afflicted with disease. Some even opt to wear masks while in the Shadowfell.

Typically speaking, Shadow Dragons are not natural. They come about when a Dragon spends too long within the realm. This may occur by accident or on purpose. Dragons banished here may eventually lose the color of their scales, taking on an inky-black colored scale and acquiring Shadow Flame breath.

Once ruling large swaths of the Shadowrealm, it would seem that time has since passed. While they still may be abundant within the plane and are considered among the evillest, cunning, and intelligent Dragons, they seem to have less control than they once did within the realm.

These creatures are interesting as they can be anything really. A Shade is created when a humanoid merges with what is known in the Shadowfell as “Shadowstuff” giving them powers in line with the Shadowfell. Things like being able to merge into the shadows almost teleporting between areas of shadow, or create shadowy clones of themselves.

The process for merging with the Shadowstuff was painful and complex. It required removing part of one’s soul and replacing it with this Shadowstuff. However, once done, it granted the new Shade powers beyond that of their previous mortal abilities.

This incorporeal undead can be found quite easily in the Shadowfell. They are able to drain the power and strength of living creatures, they particularly enjoy feeding on those creatures who have lived morally good lives.

Who Rules the Shadowfell in DnD 5e?

In current DnD 5e lore, the Raven Queen is the ruler of the Shadowfell, her even being based there. She is the Goddess of Death, but much more so about keeping the balance of life and death intact.

Are the Feywild and Shadowfell connected in DnD 5e?

What is the difference between the Underdark and the Shadowfell in 5e?

The Shadowfell is a different plane of existence, one must find a way to travel between the planes to reach the Shadowfell. The Underdark is somewhere that exists on the Material Plane, just deep deep underground.

Is there light in the Shadowfell?

There is no sun, stars, or moon within the Shadowfell. The plane abhors light. Entries written about the Shadowfell say that all light sources are severely reduced in effectiveness while here. Another downside is that if a light appears it can be very visible to predators and other creatures.

So that’s it for this post on the Shadowfell. I hope you learned a little something about this dark and dingy plane, I know I sure did. I’m sure you’re also aware that I haven’t covered everything about the Shadowfell here, that’s mainly to encourage engagement with other resources out there. However, I may revisit the topic later down the line if I think I have more to say on the topic.

Until next time, may your days be filled with critical successes!