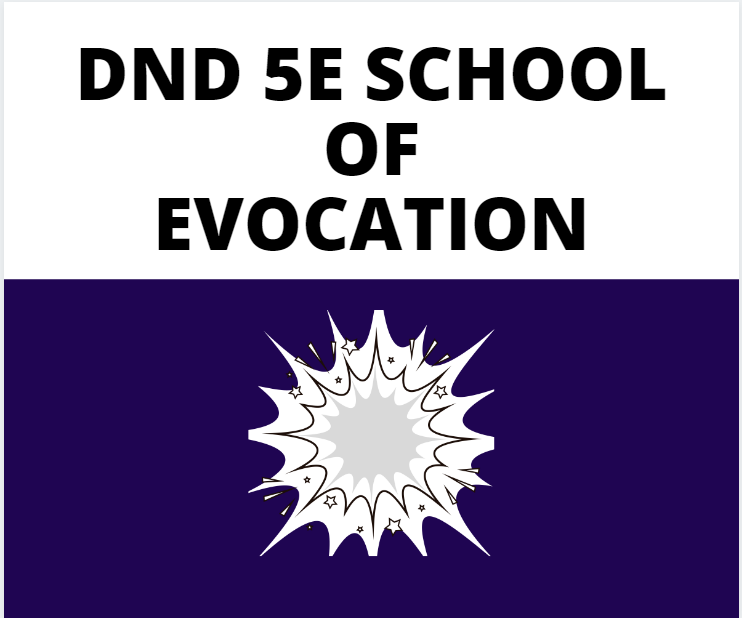 Good day everyone, hope you’re all well. So in today’s post, DnD 5e School of Evocation Explained, we’ll be going over probably one of the most common schools of magic, evocation. As is now standard, we’ll get a brief summary of evocation, then look at some specific spell examples, and finally, we’ll finish off the post with some flavor of how I would describe certain evocation spells.

With all that said, let’s look at the school of evocation!

Evocation is the main school of magic if you’re looking to deal straight up damage to your foes. Don’t get me wrong, there are spells in the other categories that deal damage, but that’s evocations main attraction, big hard hitting spells.

The idea behind it is that as the caster, you manipulate the magical fabric of the world to shoot out fire or zap someone with lightning. The school contains a lot of iconic spells from the game, which we’re going to take a look at a couple of examples.

A lot of the spells in this school are directly damaging. Such as this famous spell from the game.

Fireball is one of the most iconic spells from evocation. It’s the most obvious hard-hitting damage spell for its level. When it’s used it creates a 20-foot-radius sphere of fire that radiates out from the center point. Dealing 8d6 Fire damage to anyone caught in the blast who fails their Dex saving throw. One interesting thing about Fireball that I used to mess up, is that I thought it was an active explosion, like, blowing up dynamite or something like that. However, it seems more like it’s just a blast of intense fire that shoots out from the origin point.

On top of most of the spells dealing damage, some have other effects on top of that, such as this spell.

Sunburst, this spell is a powerful holy spell. Think of it as a holy flashbang. Anything caught in its 60-foot radius must make a Con save, if they fail, they take 12d6 radiant damage and are considered blinded for 1 minute. Interestingly, this spell can dispel magical darkness cast on an area.

So let’s say one of my NPC’s cast fireball at the party, this is how I would go on to describe it. Let’s also assume they fail their Dex saving throw.

The Wizard raises his hand, and you watch him draw some symbols in the air, as he stops, you see a small orange ball of light at the tip of his finger. He points it towards you and your friends. You the light shoot an orange beam that touches the area in between all of you. You have little to no time to react, as the area he pointed at erupts as a ball fire radiates out from that point. You feel the heat burn up parts of your exposed flesh, you can smell singed flesh in the air and burning pain across your whole body. You take 26 Fire damage.

Bit of a shorter post this time around, evocation isn’t that complex of a school of magic. I still hope it helps round out your knowledge of the schools of magic and helps you visualize the spells a little more. Thanks for taking the time to have a read through this post and until next time, may your day be a critical success!