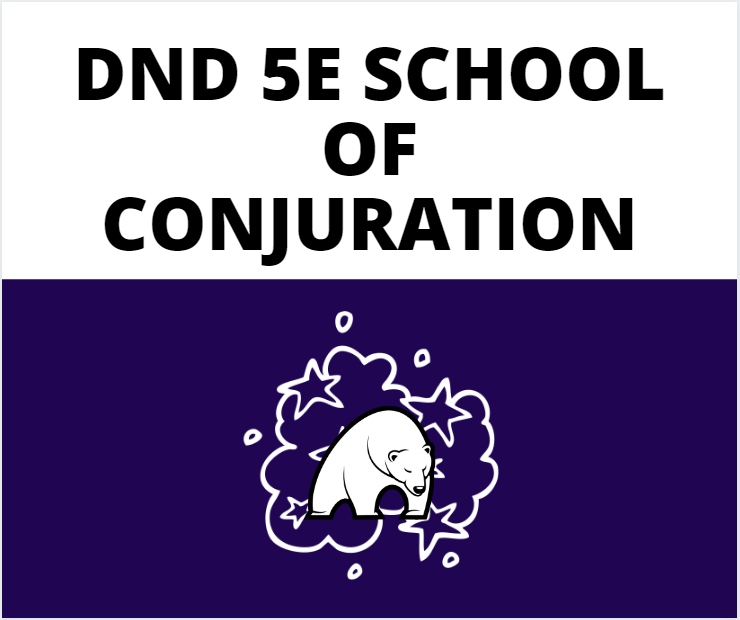 What’s up folks, I hope you’re all well! In today’s post, DnD 5e School of Conjuration Explained, we’re going to be going over the school of magic known as conjuration. We’ll look at some initial details to set the stage, then dive into some specific spell examples of conjuration spells.

Have you ever just wanted to be able to summon a pizza when you’re hungry? Or call forth a loveable little creature to keep you company? Well at its base, that’s what conjuration magic does. As per its name, it conjures things from magic. It typically deals with the transportation of creatures and objects from one place to another.

There are plenty of spells to choose from in this school of magic, so let’s take a look at some examples.

The Conjure Animals spell summons forth fey energy which transforms into animals of the casters choosing. The spell states that the weaker the animal of choice the more of that creature there can be, this also works in reverse, the stronger the creature, the less there are. So a caster could summon 8 squirrels, but could only summon 1 polar bear. This is because a squirrel would be the lowest CR (Challenge Rating) in the game, which is 0. While a polar bear is CR 2.

Although it’s not always ethereal effects, a lot of conjuration brings forth physical objects, such as food.

The Heroes’ Feast spell is a relatively high-level conjuration spell which actually requires a material component worth 1000 Gold. When the spell is cast it consumes the required material component and summons a grand feast. This feast provides a number of beneficial effects to up to 12 people for 24 hours. It cures all disease, and poison afflicting the participants. It makes them immune to poison and fear effects. It gives them advantage on Wis saving throws and it increases their hit point max by 2d10 as well as healing them up to the new maximum.

As always it depends on the source of the spell and the specific spell being cast, but when it shows up I like to make sure I mention things like, the energy of the spell taking form, where once there was nothing, now there is something. I always generally encourage people to describe their own spells, but some people prefer it if I do it as the GM. So let’s say for instance someone was to cast Conjure Animals in my game and summoned a polar bear.

As you draw the symbols in the air, concentrating on manipulating the arcane energies in the world, you say the words as you have studied and from the air itself, pour out a number of glowing lights. As you picture the creature you desire in your mind and focus on it, the lights respond. They dance around each other and conjoin. Within moments the lights form exactly what you see in your mind’s eye, an ethereal looking white-furred bear. Its huge maw opens and lets out a beastly roar at your target.

As always, I hope this post helped you understand more about conjuration magic and what it can do within this game. I’d like to think that my descriptions will help you add a little more flavor to your own spells and effects, be you GM or player. Thanks for taking the time to have a read through this post and until next time, may your day be a critical success!