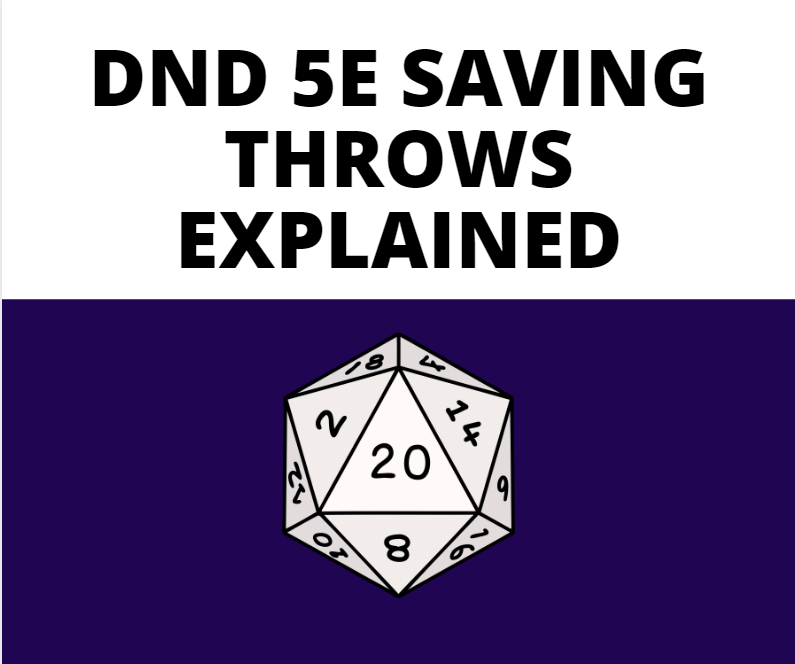 Hey everyone! In today’s post, DnD 5e Saving Throws Explained, we’ll have a look at one of the systems that has been in DnD since I started playing with 3.5 almost a decade ago. Really it’s a pretty simple system, but it’s a part of the game that will show up very often.

Saving throws have been about for a very long time, they cover many areas, from dodging spells to avoiding death itself.

So what are saving throws?

In 5e there is a dice roll you will be asked to make fairly often in encounters. These rolls are typically used to test the character’s ability to prevent something happening to them. The scope of what a saving throw “can be” is pretty wide. Let’s go into how before we cover the when.

In 5e every character is made up of the 6 main attributes, also known as abilities: –

Each of these attributes will have a score, the higher the score, the better that creature/character is at tasks covered by that attribute. This includes saving throws.

During the course of a game, your GM may ask you to make an attribute specific saving throw, based on either what you’re currently doing, or if an attack is being made upon your character.

If you succeed, then most of the time you will resist or overcome whatever caused the saving throw in the first place, a spell will fail to take hold, you resist the disease, or you catch yourself before falling off the cliff.

The way a roll would typically work is that a character would be asked to make a specific attribute saving throw, they would roll their D20, and add their ability score modifier to the result (and their proficiency bonus if they are proficient with that attribute). The total of that dice roll must be equal to or higher than the Difficulty Class (DC) of what is currently happening to succeed.

So you’re probably asking, “how do I know what the DC is?”. That’s a good question, well done! Generally speaking, you won’t ever know the true value of the DC. Typically, you should only ever know if you succeed or fail on the roll.

I would say there are two kinds of DC’s in the game, one is set by the GM depending on how hard they think the current action/situation is. The other is based on a character’s specific attribute scores, this one is what would be used when a character/creature is casting a spell on another.

For the GM determined DC’s it would have a numerical range from 1-30+.

DC5-10 would be something easy

DC15-20 is where it would be considered hard

DC25 and upward would be considered close to impossible

For a character-specific DC’s, we would most likely be talking about spells. Depending on the class the spell-caster is they would use a specific attribute to cast their spells. A spell-caster can work out their own spell-casting DC with this quick formula

So now we know what saving throws are, and what difficulty checks are, let’s look at some specific examples of times you may ask or be asked to make a saving throw for each main ability, keep in mind a spell will tell you exactly what saving throw needs to be made, so we’re not going to be fully focused on spells for this one.

Let’s say as the party is trying to flee a trap-filled tomb, the entrance to the tomb is being covered by a lowering stone slab. The barbarian in the party runs ahead and holds the door in place to allow their party to escape safely. As they hold the lowering door, they could be asked to make a STR Saving throw, to see if they are able to withstand the force of the door pushing down on them.

As a party member climbs the thin ledge of the side of a cliff, journeying upward, they are attacked and lose their footing, they would be asked to make a DEX Saving Throw in order to catch themselves either on their safety rope, or manage to grasp their hand onto a rock further below that is jutting out of cliff face.

The party may be fighting some rabid gnolls. One of the gnolls bites a party member viciously. That party member would be asked to make a CON Saving Throw to resist being infected by the gnoll’s disease.

If the party is fighting against creatures that have significant psionic abilities and it attempt to psychically bombard a party member’s mind, then they would be asked to make an INT Saving Throw in order to resist some, or all of the damage inflicted.

The party are in an enchanted wood, and are starting to get lost, the GM may ask the party to make WIS Saving Throws to determine that they are on the wrong track.

The party bard may have rolled poorly on a performance check in order to entertain a tavern. They could be asked to make a CHA Saving Throw in order to determine just how badly the tavern react to the poor performance.

This throw is made when a character is in the midst of death. When a character reaches 0 HP unless it is healed, or stabilized. Every time it’s that characters turn, they must make a Death Saving Throw. The DC for which is always 10 and it is not tied to any ability score. If the character rolls a 10 or higher, they gain 1 success point, 3 of which means they are still unconscious, but not dying. If they roll lower, they gain 1 failure point, 3 of which means the character dies.

I hope this post has helped you understand what Saving Throws are in DnD 5, and has given you some ideas for the different ways they can show up in your games, not just spells and monster effects but also other scenarios.

So thanks for taking the time to have a read through this post and until next time, may your day be a critical success!