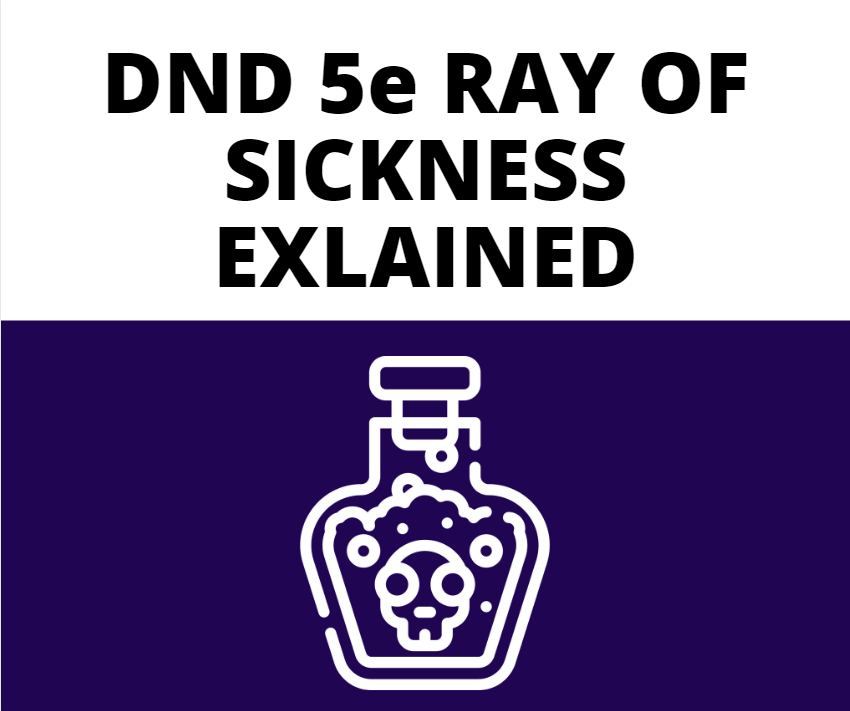 Happy Sunday everyone, hope all my American friends had a good Thanksgiving, and hope y’all got some fancy stuff during the sales. In today’s post, DnD 5e Ray of Sickness, we’re going to be taking a quick look at this poisonous spell.

As always, we’ll have a gander at the specifics of the spell and then give a little flavor on it. So without further ado, let’s crack on with the post.

In DnD 5e, Ray of Sickness is a 1st level spell. So that means you get access to it fairly quickly. It’s a pretty simple spell, a beam of poisonous energy shoots from the caster and hurts the target for 2d8 poison damage. On top of this, the spell also forces the target to make a Con saving throw (see our post of Saving Throws), if they fail the target is considered to be under the poisoned condition.

The spell does a decent amount of damage and if it does manage to inflict the poisoned condition, then it is very strong. Being poisoned means the target has disadvantage on attack rolls and ability checks.

However, keep in mind that they are only poisoned until the end of the casters next turn. This is still relatively clutch if the party encounters a creature that may have a multi-attack, as each roll would be at disadvantage.

With this being a simple first-level spell it’s fairly easy to conceptualize this spell. Here’s an example of how I might describe it if it were to show up in a game of mine.

The Necromancer spits some blood to the side after being punched in the mouth by the barbarian. He smiles as he raises his hand. His fingers start to quickly and expertly draw arcane sigils in the air as well as muttering the arcane words he requires. As he finishes he whips his arm pointing towards the barbarian. A whip of green energy shoots from the finger of the necromancer and warps around the wrist of the barbarian. The energy pulses once as the veins on the arm of the barbarian glow green with toxins. Even as the energy whip fades, you can still see the veins of the barbarian throb with a sickly green color.

Just a small post today, have been working on some exciting stuff for you all, so hopefully, this will tide you over till the next post. Ray of Sickness is for sure a cool spell, and it effects can definitely be clutch in the right circumstances and against the right enemies. The fact that it does direct damage as well as potentially having a lasting effect on the target makes it a fairly strong spell for a 1st level spell.