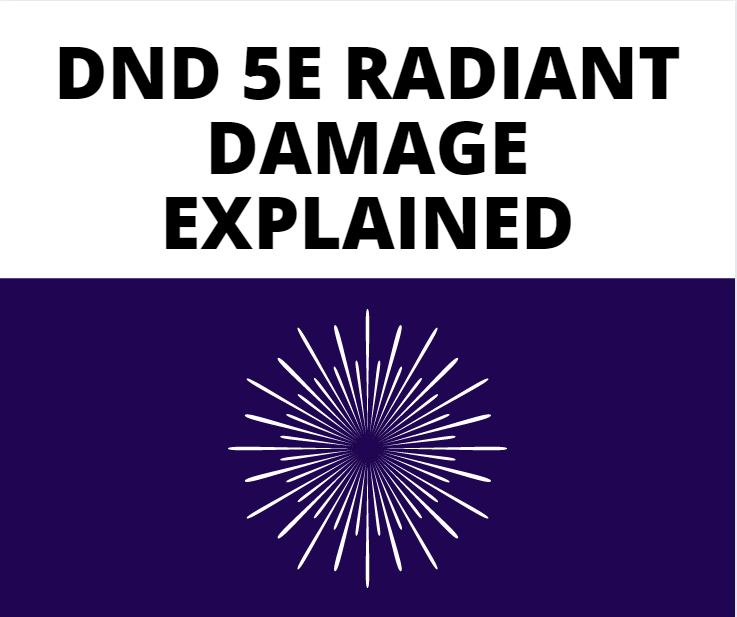 In this post, DnD 5e Radiant Damage Explained, we’ll take a quick look into radiant damage and how it may show up in your game as well as some considerations for both the DM and players when it does show up.

So in our previous post, DnD 5e Damage Types Explained, we spoke about all the different damage types in the game and gave some examples as to where those damage types would be found.

Now let’s have a little look into some of the more esoteric ways radiant damage may show up in your campaign.

How would it come up?

As stated in the post about damage types in dnd 5e, we said that radiant damage mainly comes from holy sources.

Although in DnD 5e radiant damage has been a little reduced in power. In previous editions, it used to cause extra damage to undead, demons, and devils.

Now it tends to just interfere with certain undead creature’s abilities. Such as a vampire’s ability to regenerate HP on its turn.

How to describe it?

When I’m DMing or if I’m playing a spellcaster I like to add flair to the description of my spells. I like to think that each spellcaster after mastering their abilities has their own little tweaks to the spells, making everyone’s spells a little unique to them.

So when I play a Paladin or have a Cleric open a can of holy wrath, I tend to always describe radiant damage as if it is bright and warm. Sort of like the sun’s warmth.

However, most of the time when I use those classes it tends to be a very typical God of light Cleric/Paladin.

There are many Gods, and there can be clerics and paladins of all of those Gods. So then I’d say it’s open to interpretation depending on the God.

So what I’d suggest is if you’re DMing for a player that plans on using a lot of radiant damage that you consider the source of your power.

The same thing goes if you’re playing one of these classes, consider the source of your own power when you cast spells and invoke the power gifted to you by your God.

Since radiant damage doesn’t come up all that much in the game without I just wanted to quickly go over this damage type specifically as it’s not as obvious as some of the other damage types.