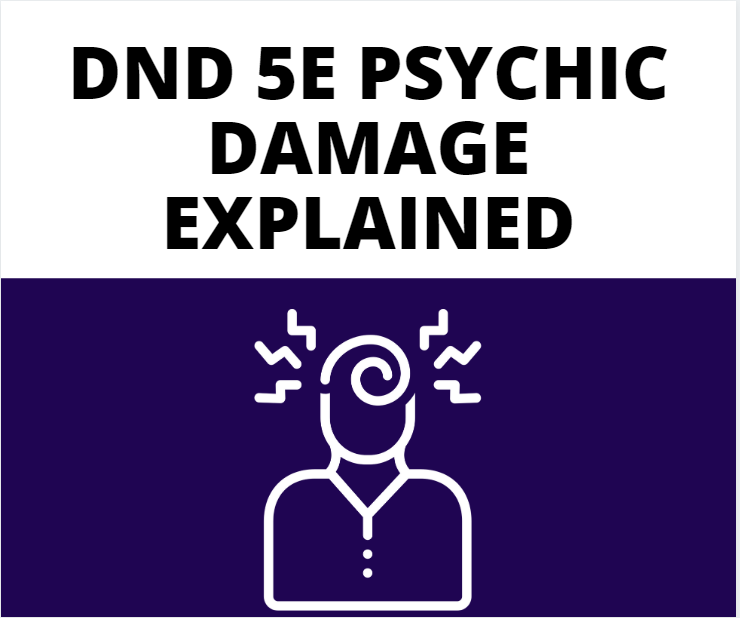 So without further ado, let’s have our quick dive into how Psychic Damage can show up in your games.

Psychic damage is an interesting one in the DnD world. The way I see it is that it’s practically invisible. It’s not like someone casting a Fireball, or swinging a sword, the damage takes place inside the mind of the victim.

Think of the worst headache or migraine you’ve ever had, not imagine someone with the ability to just inflict that upon you. It’s a different kind of feeling from being cut or burned or bashed. Let’s look at some examples of creatures and spells which can inflict Psychic Damage.

There are a few creatures capable of inflicting psychic damage naturally without the use of spells in DnD. Some are able to send out psychic energy in bursts.

Banshee’s are creatures you may be familiar with from standard human folklore. Generally, they’re creatures born of great sorrow or anguish. In DnD they have the ability to Wail. Once per day a banshee can cause all other creatures near her to make a Con Saving Throw. On a fail all the target drops to 0HP. If they succeed, they take 3d6 Psychic Damage. A Banshee with its wail available can be an extremely tough encounter, so tread carefully when this creature is involved.

Some creatures have further control over their Psychic powers and are able to imbue their weapons with Psychic energy to allow them to do more damage.

The Githyanki and Githzerai come in all shapes and sizes, both are two sides of the same coin of their race. They both have the capability of infusing their weapons of choice with Psychic energy. So when they attack with those weapons they deal Psychic Damage on top of their normal weapon damage.

Then there are some creatures that have clearly evolved for eons using their Psychic abilities. These creatures can wield their mind as a very potent weapon.

Mind Flayer’s are creatures that rely on their Psychic prowess to function. They exist as a hive mind, many Mind Flayers are linked up to an Elder Brain, which controls them like worker bees. These creatures have the ability to use an ability called Mind Blast, which fires Psychic Energy in a cone in front of the Mind Flayer, if the creatures caught in the cone fail, they take 4d8+4 Psychic Damage and are Stunned for 1 minute. They can also read minds and levitate at will using their innate Psychic abilities.

There are for sure a number of spells that are able to inflict Psychic damage on the targets of the spell. Some of these spells make it so the target’s mind is altered, which can cause psychic damage in certain scenarios.

Psychic Damage is all about messing with the mind, either causing direct damage or causing the mind to hurt itself, almost like in Pokémon when a creature hurts itself in confusion.

Phantasmal Killer is a good example of the mind attacking itself. This spell creates an illusion that if the target fails their Int Saving Throw, they believe completely that the illusion is real. If the illusion is a hazard or a creature the targets mind would do everything to make it believe the illusion is real. Meaning they can even take damage from this illusion, but it would be in the form of Psychic Damage. However, the target might see blood dripping from their illusory wounds or charring of the flesh of illusory burns.

Some of the spells can simply imbue the caster’s weapon to cause Psychic Damage on a hit.

The spell Staggering Smite is a spell that a Paladin would cast when they hit with their weapon. They use up their spell casting resource to cast it and alongside the weapon damage they cause 4d6 Psychic Damage.

One of my personal favorite spells is a simple Cantrip, loved by bards everywhere.

The Vicious Mockery spell states that the caster hurls a string on insults at a creature, if the creature fails their Wis Saving Throw, they take 1d4 Psychic Damage (the damage increases at later levels). There is nothing more satisfying than killing a bad guy in DnD by having its mind explode due to being insulted.

So like we talked about in the opening, psychic damage is almost invisible. So describing it usually comes down to describing the actions the target of the damage takes after having the damage inflicted on them.

How I like to describe it is by saying that the target feels a sharp pain in their head, almost like a ringing sound turned up to maximum volume. Like when you see an explosion in an action movie and it plays the high-pitched whining sound.

Depending on the damage done to the target you can talk about how blood might trickle from their nose, ears, or eyes due to the damage being caused to the brain. Or similar to Psychic Scream spell, if it kills the target, the book (Xanathar’s Guide to Everything) actually says it causes the target’s head to explode.

Indeed it is. Even if Wizards of the Coast come out with a full Psionic ruleset, Psychic damage is still considered magical. It’s just a different kind of magic from spellcasting. So keep that in mind.

Can you take Psychic damage while unconscious in DnD 5e?

An interesting question, but upon thinking on it more, the answer is a simple, yes. The brain is still active during unconsciousness, so any damage it would take via magical sources would still occur.

That was our quick dive into Psychic Damage. I hope that it has given at least a basic understanding of how it shows up in the game and how you can describe it to your players, or add some flavor to your own character.