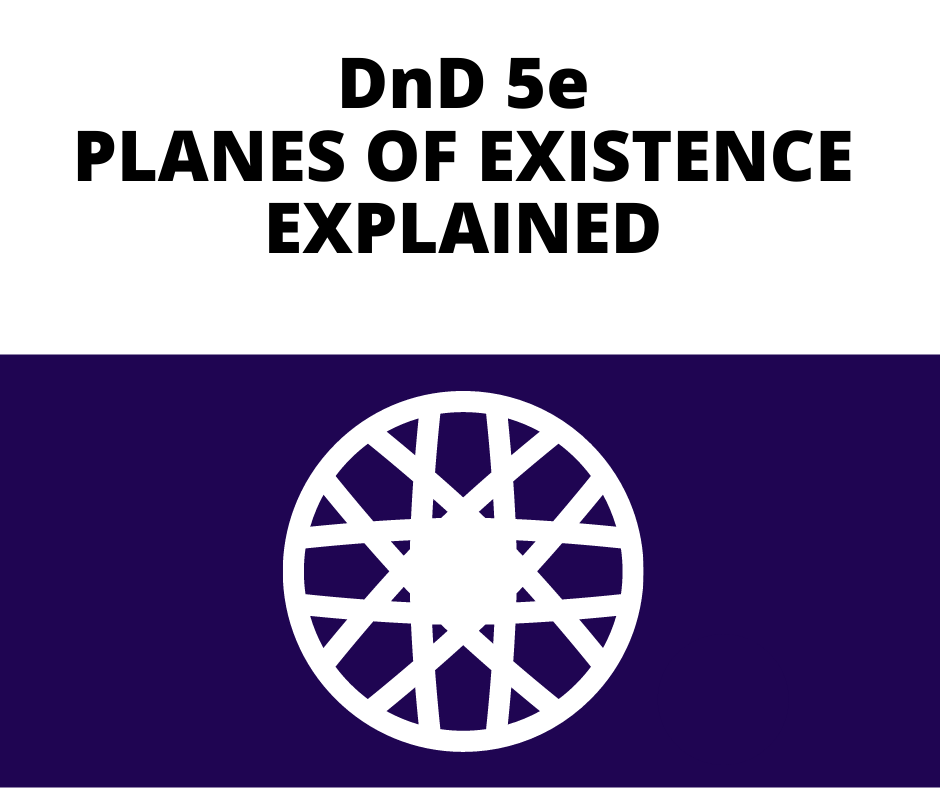 So get comfy and look out for any blue police boxes as we go dimension-hopping. Let’s dive right into today’s post!

What are the Planes of Existence?

Simply put, The Planes of DnD are different realms, or dimensions (depending on how you want to envision it). These different dimensions typically have different rules associated with them. Think of them almost like visiting alien worlds, even if the space shares similarities to the plane you would call home, you may not know the basic rules for survival or existence on these planes.

The Material Plane is where the majority of adventures will take place (at least typically speaking). This is the plane where humans, elves, dwarfs, and other races call home. It is in the center of The Great Wheel, as elements of all the planes can be found here.

The Feywilds are what is considered a reflective plane. This means they are reflections of the Material Plane. However, it is a plane full of life and is also where the elves originated from. The reason they are known as reflective planes is that they will shift and change depending on what is happening in the material plane.

It also increases your emotions over time, making them more heightened, so being happy makes you ecstatic, and being ticked off can make you seethe with fury.

The Shadowfell is similar to the Feywild in that it is the other side of the coin, if the Feywilds are full of life, then the Shadowfell is full of death. It is home to many nasty creatures and tribes of creatures who are just trying to survive the desolate and dangerous landscape.

Similarly, to the Feywild, the Shadowfell dampens one’s emotions, almost inevitably forcing a depressive-like state on the creatures that go there.

The Ethereal Plane acts as what is called a Transitive Plane. It exists as almost a barrier between the inner planes and the outer planes, but also acts as a way to connect them. It’s like a magical tollbooth.

Next, we have the Elemental Planes, connected to the Material Plane via the Ethereal Plane. These Elemental planes represent the building blocks of the known universe. They are Air, Water, Fire, and Earth. It should be said that there are in-between planes that combine these base elements to create new planes, for instance, the plane of Fire and Water would be the Plane of Steam. However, they are not as well documented as the primary elemental planes.

The Plane of Air is as it may seem, there is very little land, debris from other planes finds its way here from time to time, and beings both native to this plane and others that aren’t will settle on these floating islands. Of course, in between these islands, Air Elementals can be seen flying around as this is their native plane.

An endless sea that encompasses the entire plane. One of the more difficult to traverse as creatures that need air to survive need to have solutions prepared for that problem. This plane is home to all manner of sea creatures; some say this is where Aboleths, Krakens, and Leviathans originally came from. So you can imagine what sorts of creatures exist here.  In terms of civilization, one may find settlements of Merfolk here.

Another plane that is difficult to exist in as a Material Plane native. A large portion of the plane is effectively just pure fire, heat, and magma, however, there are spots cool enough to support life. The great City of Brass resides in this plane, a city inhabited and ruled by the Efreeti. These cooler areas are still relentlessly hot, basically as hot as the hottest desert on the material plane.

Think of an endless mountain. That is what the Plane of Earth is like. An incomprehensibly big mountain. Most of the plane is made of solid rock, making it the most difficult to traverse, and even travel to if one is not careful. Most of the traveling of the Plane of Earth is done within the pockets within the mountain, even though they are small pockets compared to the size of the plane, these pockets can be big enough to support decent-sized civilizations. They can be big enough that mountains can exist within these pockets, ones that rival the tallest on the Material Plane.

How do the Planes of Existence work?

They are bound together in specific ways. The inner-planes, at least in my opinion would have more crossover with the Material Plane, thus why you may see Earth/Fire/Air/Water elementals on an uncommon basis. Same with the reflective planes, it might not be an insurmountable task to find a portal to the Shadowfell or Feywilds in the Martial Plane.

The outer planes are much more difficult to get to, usually requiring high-level spells to get to. These planes are usually home to very powerful beings, such as deities.

One thing to keep in mind is that all they exist in a kind of delicate balance. So consider that anything going seriously wrong on any of the planes may have unintended consequences on the other planes, especially neighboring planes.

The best way to conceptualize the planes is that they are their own dimensions, usually with their own rules, inhabitants, and effects.

Where to use the Planes of Existence?

That really depends on you as the GM. Some are easier to use at lower levels than others just due to the inhabitants of the plane and the makeup of its terrain. Be aware that if not all then most of the planes have some serious creatures in them that will happily gobble up a low-level party as a snack.

Normally when I use them I have enemies of the party have bases of operations in these planes so that they are not bound by the resources on the material plane, but again you’re talking about either powerful beings or powerful organizations.

Once someone gets access to Plane Shift, then all bets are off, the party is able to go adventuring in the Planes. So maybe keep some ideas in your back pocket in the chance that your party decides to go off the beaten path.

How many Planes of Existence are there in 5e?

This is a hard one to answer, I’d say the ballpark figure is somewhere around 20 different planes, but the number could be much higher due to demi-planes, and the planes that exist on the borders of neighboring planes. Such as the previously mentioned Plane of Steam which exists between the Plane of Water and the Plane of Fire.

What Cosmology does 5e use?

Is the Feywild a Plane of Existence in 5e?

Big post, so large I’ll need to split it into two parts. The next post will briefly cover the outer planes, and then after that, I’ll make posts on each of the individual planes of existence. This should be interesting if you plan to take your party to any of the planes.

As always I hope you learned about the Planes, I know I learned one or two things I didn’t know, so I hope you picked up some things too. Until next time, I hope your day is a critical success!