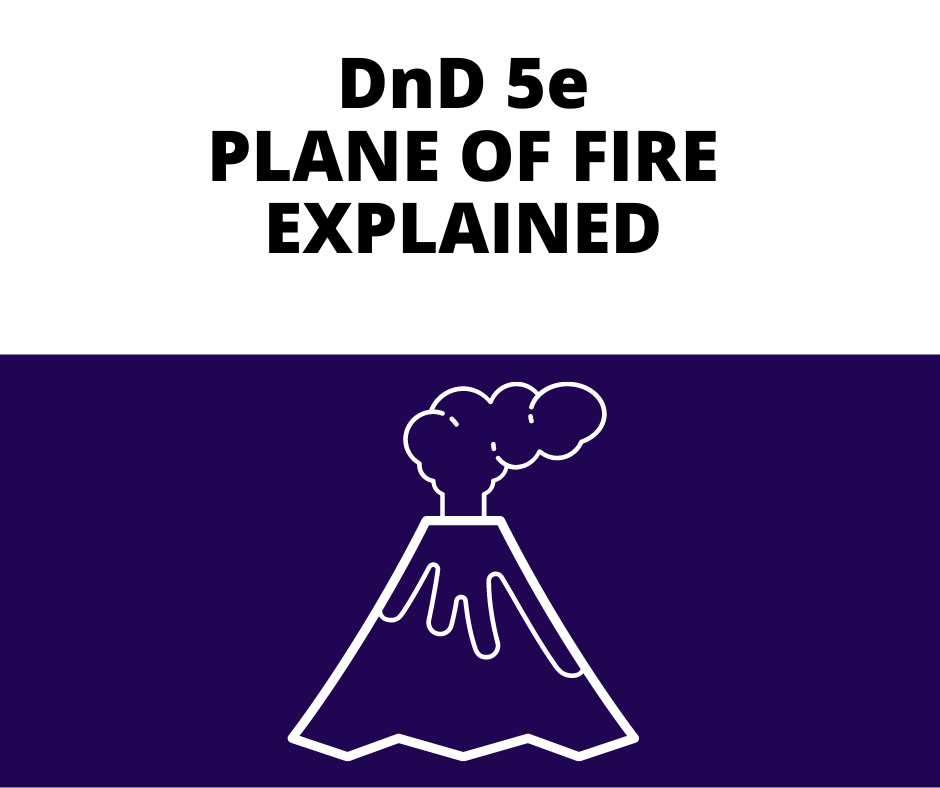 Afternoon folks, I hope you’ve all been well! In today’s post, DnD 5e Plane of Fire Explained, I’m going to be covering one of the hottest places in the DnD multiverse.

So bring the sunscreen and don’t jump into the pools of lava as we dive right into this week’s post!

What is the Plane of Fire?

One of the four main elemental planes. This plane of existence is the true representation of fire itself. The land, the seas, and even the air are so hot that without some kind of protection from the heat, most creatures would perish soon after entering the plane. The air itself is hot enough to melt the insides of creatures who dare come here unprepared.

The plane is hard to navigate, the land itself slowly shifts as it’s made of loosely packed molten lava. Therefore, maps become fairly useless as hills and mountains can shift and crumble as the land itself moves. Structures become hard to place for the same reasons, however, with enough effort permanent structures can exist.

The plane even has spats of different weather, although, with a similar twist of fire. Smoke can gather in the skies above where magma flows, and this smoke can gather embers, letting them loose like raindrops, your umbrella is not going to save you here.

While the plane is inhospitable for many creatures, it is home to many. It can be a hard life for most in this plane, but there are wonders and beauty here that are unlike anything on the material plane. One just has to peer past the smoke to see the beauty of the fire.

What’s in the Plane of Fire?

Like most Elemental Planes, it can be quite sparse with actual locations, due to its shifting landscape, and its inhospitable lands. However, one place stands out among everything in this plane, and that is The City of Brass.

The City of Brass

This city is the hot spot (pun intended!) of the Plane of Fire. It is where the race of creatures called the Efreeti call home. It is a massive floating city ruled by the leader of the Efreeti, known as The Grand Sultan.

It cannot be understated how extravagant this city truly is. Every structure has brass included in it, either being entirely composed of brass or having brass accents. The exclusivity and sheer wealth of the city bring a certain clientele here. The city can provide almost anything if you are willing to look hard enough. Nefarious criminals can peddle all kinds of nasty items here without fear of the law. The only law here is The Grand Sultans law.

The Grand Sultan is by all measures a Tyrant. A very successful one at that. Holding the city in his grasp for thousands of years, weathering many attacks from various sources throughout the years, he and his army of over 4 million Efreeti have proven to be a challenge no one has yet to conquer.

Who’s in the Plane of Fire?

Plenty of creatures call the Plane of Fire home, but a lot of them are inconsequential, products of life existing, so mundane creatures we may see on the Material Plane are mimicked here, but with a twist of lava or fire. Lava Bats, Fire Snakes, consider having these show up to add to the feeling of the strange but almost familiar life forms here. However, other creatures that exist here that can have an effect on this are: –

These creatures are made of pure elemental energy. They are said to be able to take many forms, not just whirlwinds of fire, but sometimes take the form of animals, such as large birds of prey made of fire. Whatever shape they take they can be a force to be reckoned with.

The Azer are creatures that look similar to Dwarfs, but well, their head is basically on fire. They are said to be Elementals themselves, originating in the Plane of Fire. They are master crafters, designers, and builders. However, the Azer were betrayed by the Efreeti after helping them build the famed City of Brass. The Efreeti enslaved the Azer to prevent knowledge of the secrets of the city from getting out.

Likely the most common humanoid that can be found on this plane. They hail from the City of Brass and are normally likely to impose their will on other creatures. They can be vain creatures, in the sense that they take great pride in their station, always wanting to climb higher up the ladder.

How do you survive the Plane of Fire in 5e?

Either by having protection from extreme elements in the form of some kind of magical item or potion or by never leaving the City of Brass, while the city is still extremely warm, the temperature and atmosphere won’t kill you.

What does the Elemental Plane of Fire look like in 5e?

Imagine the Christian version of Hell, with fire and brimstone, lakes of lava, and more or less a desolate land. That is the Plane of Fire. Of course, one should always be on the lookout for the magnificent City of Brass that floats around the plane.

Can Genasi survive the Elemental Planes in 5e?

They may survive a little longer than most regular folk, but not much longer without magical protection.

As always I hope you learned a little about the Plane of Fire, I know I did while researching this for this post. I love the Elemental Planes, in fact, the entire multiverse within DnD honestly fascinates me. So please don’t skip adding these to your world, as it can add such depth and age to your world.

So until next time, I hope your day is a Critical Success!