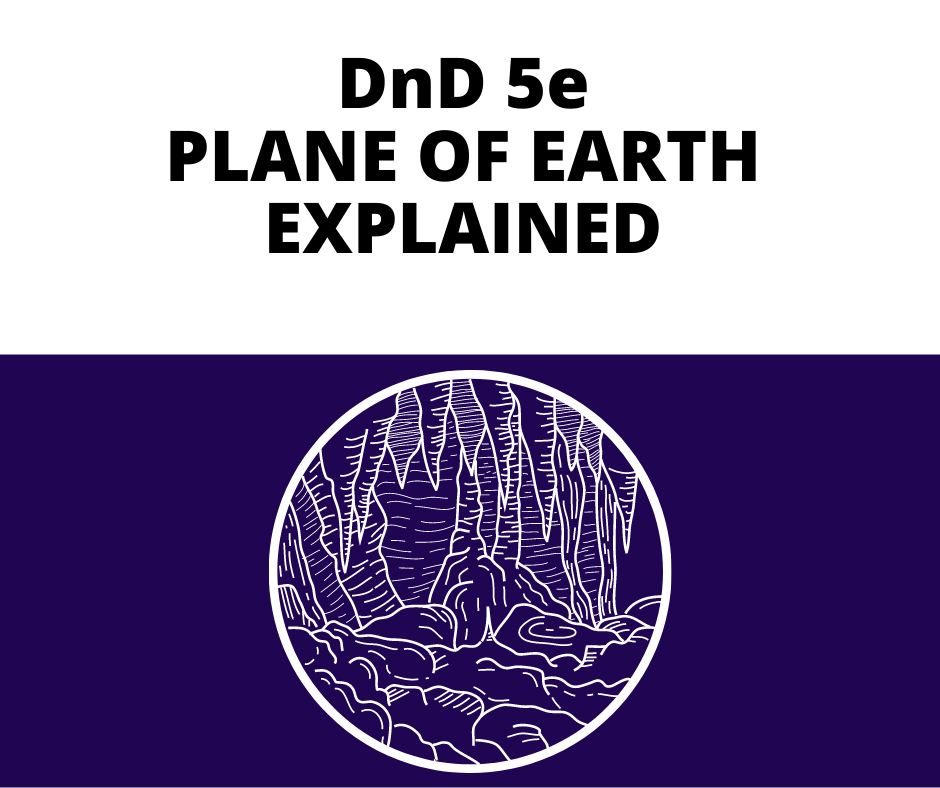 Afternoon folks! In today’s post, DnD 5e Plane of Earth Explained, we’ll be taking a bit of deep dive into this cavernous topic.

So make sure your head torch has batteries and your safety line is secure as we dive into today’s post!

What is The Plane of Earth?

As you may have guessed by now based on our other entries into the elemental planes, The Plane of Earth is made up almost entirely of solid matter. Now within this solid matter, there are air pockets, or bubbles ranging from the size of a room to the size of entire cities.

The plane can be very dangerous as it’s always shifting, similar to the Earth’s tectonic shifting, this plane also shifts. Earthquakes are common and should be an expected hazard when traversing this plane.

Like the other planes, it is connected to each of the other elemental planes, and as you get closer to these connections, aspects of those planes can drift in. Poisonous gasses, water, lava, all are common here. So without a natural guide, going to this plane alone is a deadly accident waiting to happen.

What’s in The Plane of Earth?

There is actually a decent amount of locations within the Plane of Earth, however, most of it is related to the Dao, this plane’s version of the Djinn. Keep in mind though that this plane is vast, and there are many hidden pockets, Wizards happily create towers here that would be close to impossible to get to, even if the location was known.

This is the capital of the Dao. These genies operate from here under the rule of the Great Khan. It is also more or less the de facto trading post of this entire plane. The Dao employed slave labor to carve out large sections of the plane in order to host their seat of power.

This city is built like a maze, the deeper in one goes the more complex and maddening the maze gets. To the point where without some kind of cheat sheet, guide, or divine intervention one would become lost and ultimately perish within these mazes. Another fate might be that before death the Dao would capture you and sell you into the slave trade that the city is well known for.

This area is the overarching area that contains the Sevenfolk Mazerwork. This massive mining effort was undertaken by the Dao (using their slaves). It is said to be a cluster of maze-like tunnels and pockets bigger than most continents on the material plane. It also contains two other locations that can be used to travel between the other elemental planes. The Iron Crucible and the Pale River.

This large fountain of liquid metal which sits near the Sevenfolk Mazework can allow people to travel to the Elemental Plane of Fire. When used the travelers are effectively spat out below the City of Brass into the awaiting fleet of boats that the Efreeti used. Likely to also be sold into some kind of slave trade, unless someone was an esteemed guest.

This area is not commonly used as travel to the Elemental Plane of Water can be tricky for most land-dwelling creatures, but it does exist, this saltwater river was unearthed during the excavation during the creation of The Great Dismal Delve by the Dao and their workers. It is said that it connected to a “filthy” area of the Elemental plane of water used by the Marids.

Who’s in The Plane of Earth?

All of the Elemental Planes have a native Elemental. The ones in this plane are particularly interesting. They are able to glide through solid rock as if it was simply water. Other creatures here have the same ability, but likely upon a virgin arrival to this plane, it would likely be these creatures that would be seen performing this first.

They can be very dangerous if provoked, dragging travelers deep into the solid matter and leaving them there to suffocate. They can also be very territorial when beings attempt to mine, or otherwise disturb the lands.

Honestly, Xorns look like some alien you would see in a Doom game. These 3 armed 3 legged creatures are stout, with a mouth on top of their head and eyes on the side of its torso. They are intelligent creatures, which seems unlikely upon first seeing them. However, here on the Plane of Earth, they can actually be quite peaceful. They live together in nomadic groupings.

If hungry the Xorns can be extremely dangerous, similar to other creatures, grappling something and leaving it to die in a small pocket in the solid matter of the plane is a simple method of getting rid of its transgressors.

The Dao actually hunt the Xorn for sport and tend to keep them as slaves.

As we’ve learned throughout this entry, the Dao are not a nice race. They readily employ slave labor. They are intensely secretive and protective of their goods. Something that would be just a simple transgression on the material plane could lead to punishment by death on this plane.

They are, however, very powerful, they have similar powers to that of the other genie races across the elemental planes. They have clearly shown they are the prime force in this plane due to the creation of the Great Dismal Delve and everything that resides within.

Is there light on the Plane of Earth 5e?

There is no light here, except for some of the gemstones which glow providing a decent bit of light. However, these are few and far between and are often quickly mined and traded to the Dao.

Is there a top or bottom to the Plane of Earth 5e?

There is not, all the space in this plane is filled with solid matter, life exists within the comparatively small pockets of space that is created as the plane shifts. Likely if one reached the top of the plane, they would find a way to the Plane of Air, and similarly to the bottom the Plane of Water.

I’ve been really enjoying researching these topics on the different planes, as I’m a big fan of the idea of the multiverse within DnD. So learning more about them arms me with the knowledge of how I might portray them within my world.

Always keep that in mind folks, that ultimately everything in DnD is just advice. Run the game the way you and your players enjoy. So until next time, I hope your day is a Critical Success!