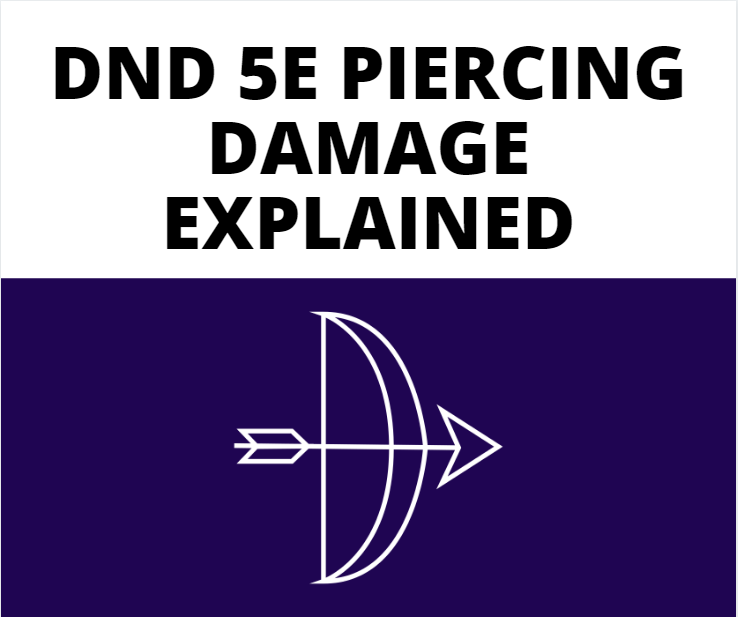 Back again, with another post, DnD 5e Piercing Damage Explained. In today’s post, we’ll be going over what piercing damage is and when it might show up in your games. We’ll look at some specific examples of creatures and spells that can cause piercing damage.

So let’s see what piercing damage is all about!

The sources for piercing damage due to it being another mundane type of damage similar to bludgeoning damage are numerous. It’s pretty self-explanatory by way of its name, but let’s discuss it. Any kind of weapon or attack that would pierce the skin or armor of a target would be considered piercing damage. The most obvious of these being spears, arrows, and teeth.

Having looked through the monster manual many times, it feels like most of the creatures in there are capable of causing piercing damage, one way or another either through weapons or some kind of natural weapons, like teeth or horns.

So let’s look at some specifics!

Like we mentioned above, in 5e there are so many creatures that can cause piercing damage, so we’ve picked a few that cause it in different ways so we can show the range of this type of damage when it comes to non-spell sources of piercing damage.

The Solar is one of the subtypes of angels in DnD. They are extremely powerful in their capabilities, so it goes to reason that their weapons would also be extremely powerful. So the Solar has a weapon called a slaying longbow, which when it hits a target it deals 2d8 piercing damage plus 6d8 radiant damage.

Interestingly enough the slaying longbow has the added effect that if the target has 100 hit points or less it has to succeed on a Con saving throw or it dies. No save, just death. Seems fitting for something so powerful.

Then we have creatures that can use their spiked teeth of maw to bite into their targets. Most of the big animal creatures are capable of this.

A Bulette is one such giant animal creature. These creatures are known as land sharks, at least according to the Monster Manual. These things burrow around underground and will ambush unsuspecting prey from underground.

They are capable of taking a large chuck out of their targets with their bite attack. Their massive jaws clench down on their targets and inflict 4d12 piercing damage.

Lastly, we have creatures that have other natural means of causing piercing damage via their horns.

The Minotaur, you don’t have to have played DnD or even be that much of a nerd to know what one of these is, they’ve been in human mythology for eons. These massive bull/human hybrids can charge their foes, aiming their sharp horns toward their target and running straight for them.

When a minotaur uses is Charge attack, it runs at least 10 feet in a straight line towards the target and gores them. The target takes 2d8 piercing damage and if the target fails its Str saving throw, it’s pushed back up to 10 feet away and knocked prone.

In somewhat similar fashion to Bludgeoning damage, there aren’t that many spells that cause piercing damage. There is actually an even small list that bludgeoning. The examples we’ll list are just a few of them, but there are only a handful of spells that cause that damage type.

Hail of Thorns, this spell imbues your ranged weapon ammunition, be it arrows for a bow or pebbles for a sling. It imbues them with thorns which fire from the ammo upon hitting the target, causing 1d10 piercing damage to the target and any targets within 5 feet of the original target.

Then we have spells that summon other creatures which can cause piercing damage.

The Insect Plague spell summons a 20-foot sphere of biting locusts (or any small biting insect of the casters choosing). Any creatures caught in the initial summoning or creatures that enter the sphere can take 4d10 piercing damage from these little insects biting at them.

We also have spells that create physical barriers made of spiked thorns.

Wall of Thorns creates a wall up to 60-foot-long, 10-foot-high, and 5-foot-thick of brush filled with sharp thorns. When it’s summoned any creatures in that area can take 7d8 piercing damage. If a creature attempts to move through the wall it can take 7d8 slashing damage as it tears itself on the sharp needle-like thorns.

As with the other mundane damage types, piercing damage comes in all sorts of forms. The thing they have in common is that they’re intended to pierce the skin or armor of their targets. Generally, when it shows up in my games I like to make sure I emphasize this, using phrases like stabbing, perforated or punctured.

So let’s say a Spirit Naga creature bites a player, this is how I’d describe it.

The massive snake creature slithers its way over to you, with blood from previous attacks dripping from its fangs is strikes with unnatural speed and sinks its fangs deep into you. Its fangs pierce through your leather armor and you feel the venom from the creature burn your veins. You take 7 piercing damage and 31 poison damage.

As always, I hope this helps you understand a little more about piercing damage, and many places it can come from. I hope it helps you add a little more flavour to your descriptions, be you a player or a DM.