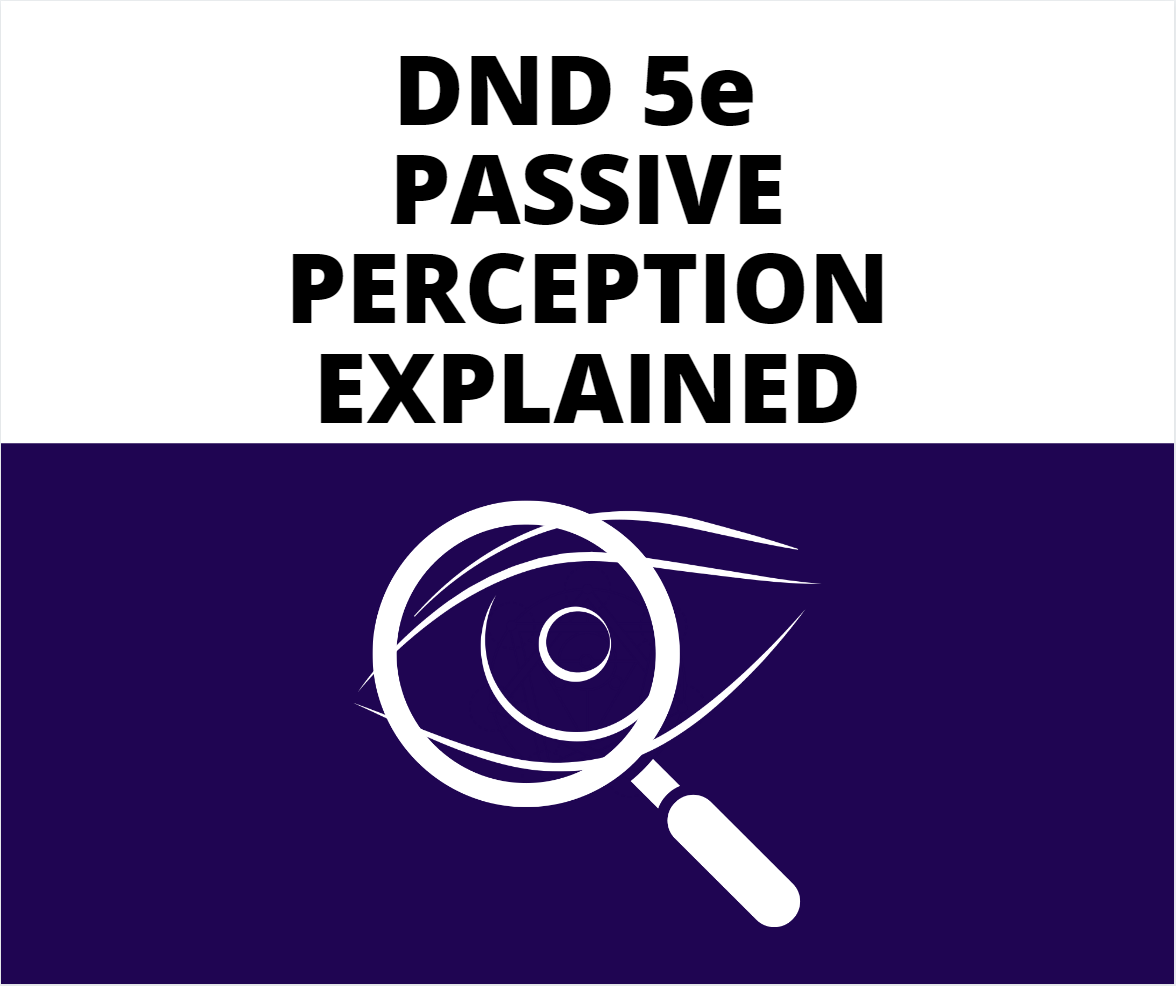 Howdy folks, today’s post will be, DnD 5e Passive Perception Explained. This can be an EXTREMELY useful tool in your GM arsenal of tricks and helps keep the mystery going. It won’t take long to explain, and I’ll throw in a little scenario where you could use it.

Okay, let’s start with the basics here. In DnD when a character or creature has to make a skill check they roll a D20 and apply their modifiers for that specific activity. Almost anything you could do falls into one of these skills. The skills are then distributed among the main stats of DnD, Strength, Dexterity, Constitution, Intelligence, Wisdom, and Charisma.

For instance, say the Barbarian wants to move a boulder blocking the path of the party, they would then roll an Athletics check, and Athletics typically falls under the Strength stat. The way that’s usually noted as “Strength(Athletics)”. Maybe the rogue wants to parkour across a broken bridge? That’d be a Dexterity(Acrobatics) check.

This brings us to one of the most used skill checks, the Perception check, or Wisdom(Perception) check.

One thing to note before we continue is that as the GM you don’t always need to adhere to where the skills are situated on the character sheets. Sometimes the way a creature or character chooses to solve a situation may require a slightly modified skill check.

Always remember the rules are mostly just guidelines, which you are free to mess around with, as long as you keep your rulings consistent and keep your players in the loop of changes you make.

Okay back to the topic at hand. So as I said, we have the Perception check. Which is used A LOT in DnD. It’s used to, well… perceive things. Okay, enough memeing. It’s used to spot things, and it’s also typically used to spot hidden things.

So say a goblin runs from battle, and the Ranger chases it down into a room. The Goblin is hiding in the room, so the GM may ask the Ranger to make a Perception check. If the Rangers result is higher than Goblins Stealth check, then the Ranger would spot them and be able to slay the cowering Goblin. However, I would call this an ACTIVE check, the Ranger actively knows the Goblin is in here and is actively looking for it.

Okay, so if there is a type of check that is Active, then it would make sense that there are ones that are Passive. Makes sense, right? Now you could say there are passive versions of all the skills, and you’d be more or less right.

However, trying to juggle that many things as the GM is quite hard. Therefore, typically only Passive Perception is used. Just keep in mind that if you want to use more, feel free!

So to round off, Passive Perception is a static “roll” or “score”, basically it dictates how perceptive a character is, without trying to actively spot something. It tends to be used for hidden objects/creatures/characters that a character wouldn’t already know about (IE the goblin scenario I used above). So think along the lines of hidden doors, or traps, or creatures hidden in stealth.

Phew, I sure rambled a lot about that, but now you know what Passive Perception is used for. Now you might be wondering how you actually figure out what a character’s Passive Perception score might be. Well, it’s quite simple actually, and it can be applied to any skill that you want to figure out the passive score for.

To work out a Passive score for any skill it’s :-

10+ any bonuses to the skill the creature has

So for example a Level 2 Ranger with a Wisdom score of 17 who has proficiency in perception and is wearing a ring that enhances their perception by 1 would get the following.

This means that if something is hidden in a room and the DC to spot it is 16 or lower, then the Ranger would spot it as soon as they entered the room.

Again as always, I hope this post helped you understand Passive Perception and the usage of other passive skills a little more. I find that using passive skills a little more can really help immerse your players. It can also be a little disappointing or jarring to players if they enter a room, they get asked to make a perception check, and they roll low and you tell them “oh you don’t see anything”. Not knowing what you missed as a player makes more sense because, well, you can’t be disappointed by what you don’t know, and you can be truly surprised later when that little Goblin that managed to hide REALLY well, shanks one of the players in the back once they walk passed him. So until next time, may your day be a critical success!