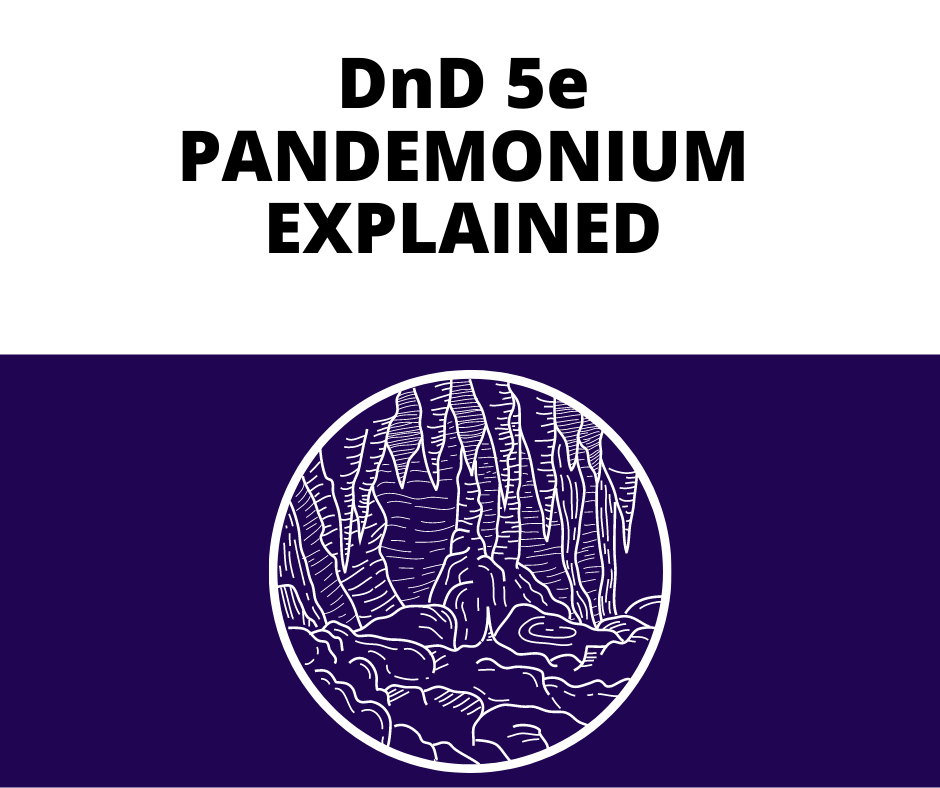 Afternoon folks! In today’s post, DnD 5e Pandemonium Explained, I’ll be going over this desolate and accursed plane of existence. It’s honestly a pretty crazy place, no pun intended. It’s said to be the most desolate plane of all the planes of existence.

So grab your earplugs and try to stay sane as we dive into this week’s post!

Pandemonium is a plane of existence in the outer planes. A place of madness, and ear-piercing winds. The winds here are what cause people to go insane, they are constant, loud, and powerful.

So loud in fact that you cannot hear 10ft from yourself. If you find yourself in these powerful winds for too long, your ability to hear will be damaged and will continue to deteriorate until you are permanently deaf. If you were trapped on this plane, deafness might be a mercy.

The winds are also known to be so strong that they can carry off those unprepared, flinging them for miles before they find their untimely demise as they are dashed across a mountain face or off a cliff.

While Pandemonium is considered to be the most desolate plane in all of the planes, there are still pockets of civilization here. Across the 4 layers of this plane, there are some small cities and pockets of odd groups of beings.

This plane is split into 4 different layers, each of which has its own unique twist. First is the massive and cavernous layer of Pandesmos. Then we have the smaller layer of Cocytus has some interesting features that were clearly carved eons ago by beings long since lost to time.  Thirdly we have Phlegethon, this layer goes against the typical gravity-defying nature of the other layers. Finally, we have Agathion, a maze-like layer that powerful beings use to hide away powerful artifacts, beings, or creatures.

The first layer of Pandemonium, this massive cavernous layer howls with the wind as it whips through the tunnels. The tunnels themselves are said to have been carved by the sheer strength of the wind itself. Interestingly due to the gravity-defying nature of the majority of the layers of Pandemonium, similar to Limbo where any surface can be used as a “floor”, there are rivers that run through these tunnels which free float in midair.

The Madhouse is a location maintained by a group known as The Bleak Cabal. It’s known as a place for people visiting Pandemonium (why you would want to do that is beyond me). Again due to the gravity on Pandesmos, The Madhouse covers every surface of a massive cavern. One should be very careful visiting this location though as while it can be a safe haven, it is filled with many truly insane individuals, as is most of Pandemonium.

An area of Pandesmos that is covered in snow. These tunnels are caked in the ever-moving snow as the wind whips through these frigid tunnels. They are known to be a home for groups of Frost Giants. These specific Frost Giants are said to worship an entity known only as The Trickster.

The second layer of Pandemonium. Similar to the first, but with much smaller narrower tunnels. This actually makes this layer more dangerous, and the smaller tunnels mean that the wind is more concentrated. If one is caught in a particularly bad windstorm at the wrong time, it’s possible the wind you outright kill you. It has been said that the tunnels here look to be hand-carved, but at best guess it happened so long ago that whatever carved them is lost to time.

A strange place but a unique place within Pandemonium. It is said to be a mass of rocks that look like a massive building had collapsed in on itself. Beneath these rocks are small tunnels in the rubble which appear to be covered with a lost language, it is theorized that the writings contain teaching from a long-forgotten race or being. Above the rocks sits a platform, one that glows a cold blue. It is said that by shouting from this location the message shouted will reach its recipient regardless of where they are in the universe. Due to this property, Howler’s Crag can be a spot for scholars, but it is also used as a hunting ground for Demons, to carry off these scholars and those who help them.

Another interesting part of this layer, this location gets its name from the tunnels carved here which allow the wind to create particular noises, which are said to be truly awful. These tunnels are vast and maze-like and it has been said that powerful secrets lie within at the center of these tunnels, one theory is that the secrets of planewalking (traveling the planes without portals or magic) lay here.

The third layer of Pandemonium. This one is interesting as normal gravity rules apply here. Up is up and down is down, there is no walking on the walls in this layer. Due to this, there are fields of windswept stalactites and stalagmites that grow along the floor and ceiling of this layer.

This area of Phlegethon is home to a fairly large city, a beacon in the otherwise pitch-black tunnels of this layer. It is run by a group known as The Banished, which we’ll get into a little later in the post. The people here don’t trust easily, especially due to most beings here being mentally unstable or worse. One place that does welcome travelers of all kinds is a tavern known as The Scaly Dog. This is the main hub for travelers on this plane looking for information or looking for work.

This is the location of a middling deity known as Erythnul. Basically, this location is now the ruins of an old citadel, the ruins have formed tunnels that carry the wind deep into these ruins. Inside is an endless battle between the souls of petitioners who wind up mad on this plane. They hunt each other and try to kill one another in murderous cold blood. Unlike other Planes of Existence that are host to endless battles, here, the petitioners are not resurrected upon death. In the guts of the citadel, Erythnul joins the battle endlessly slaughtering masses of petitioners and any who dare travel to this accursed location.

The final layer of Pandemonium. The tunnels that weave their way through the layer’s end here, in pockets that lead to dead ends. However, within the solid stone walls exist smaller pockets, unreachable by normal means. Inside these pockets are said to exist many trinkets, artifacts too dangerous to allow, as well as creatures too powerful to stop. It acts like a prison and a treasure vault all in one.

Like everywhere in the planes, life exists here in a number of forms. However, they are typically few and far between and are often inflicted with insanity from the ever howling winds.

The petitioners are limited, not many souls end up in this place and those that do are swept up by the winds immediately. Those that do not fall to that fate are often left wandering until they go insane, so they are often rather dangerous to run into for those unprepared. Not necessarily physically dangerous, but taking information from them can be just as dangerous when attempting to traverse this plane.

These folk are descendants of different races, they are mortal, and are often the ones responsible for maintaining the small cities that exist within this plane. They are known as The Banished as their forefathers were banished to this plane for some unknown reason by some unknown deity, or powerful spellcaster. They are a distrustful bunch, and many are also often inflicted with different severities and flavors of madness.

A kind of Chaos Deity. His worshipers revel in the chaos of battle. His home exists here on Pandemonium, where he wages eternal battle with the petitioners (and anything else that comes near) who dare come to The Citadel of Slaughter. It is said that he appears as a brutally disfigured human, but his features shift between human, bugbear, troll, ogre, and gnoll. Interestingly if a being does manage to draw blood from him, whatever feature was most prominent at the time, a being representing those features will be spawned from his blood and join the fray as his ally.

What is Pandemonium in DnD 5e?

To sum up the post, Pandemonium is a 4-layer Outer Plane of Existence. It is made up of tunnels that are said to be carved by the extreme wind that exists here. It is not home to many, and those it is home to have gone insane from the deafening howling of the winds here.

What Creatures live in Pandemonium in DnD 5e?

There are a number of beings that live here. Notably, The Banished is a collection of humanoids from all the different races of the Material Plane. Although Demons are also known to prowl these lands looking for easy prey.

How to get to Pandemonium in DnD 5e?

It can be gotten to via the normal methods of planar travel. Although it is said that there are ways to access it via the Plane of Air. As that is where the wind seems to be generating from that has carved out this plane.

So that’s Pandemonium. Pretty strange place. Not somewhere you’d want to visit without some serious consideration. Although a fantastic place to hide for powerful beings, and a great place to store objects or creatures too powerful to allow in any of the other planes. This plane is almost like a prison meets a treasure vault, assuming one does not go mad first. As always I hope you learned something from this post, and until the next post, I hope your week is a Critical Success!