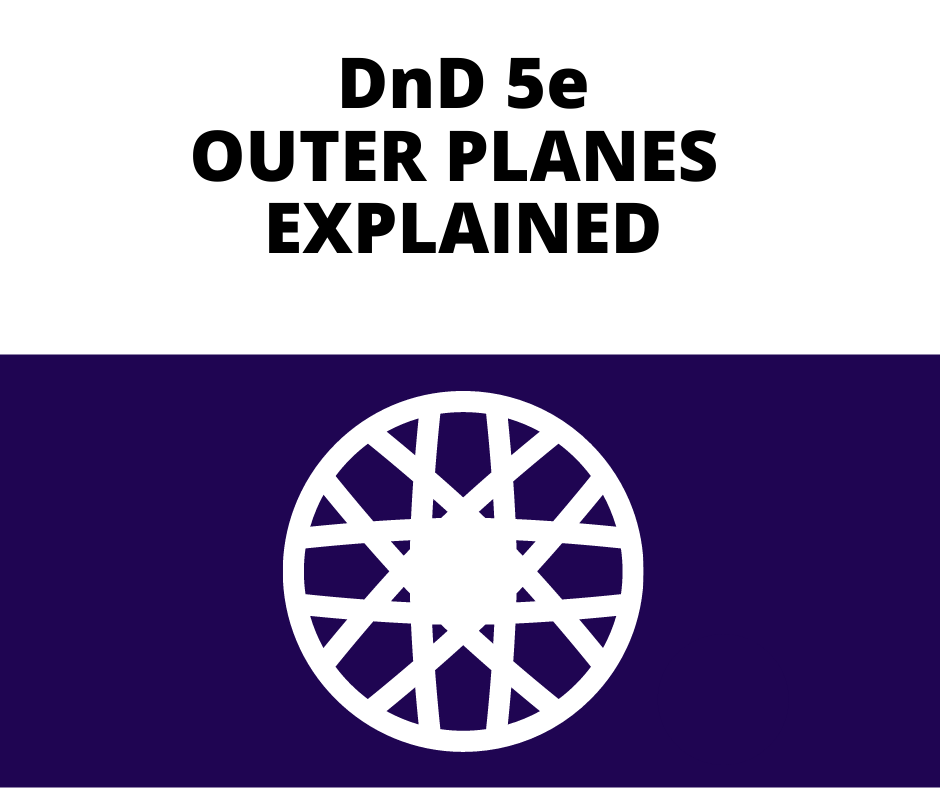 Hey folks! In today’s post, DnD 5e Outer Planes Explained, I’ll be continuing on from the previous post, DnD 5e Planes of Existence Explained. The outer planes are where the Gods can take residence, and the worlds can be drastically different from the ones we may know.

Same as last time, I’ll briefly cover what the Outer Planes are, then cover each Outer Plane, finally, in the follow-up posts, I will go over each plane more in detail.

So get ready to lock in the seventh chevron (Stargate! Woo!) as we dive into this week’s post!

What are the Outer Planes?

In DnD 5e the Outer Planes are laid out in accordance with the planes relative alignment. Covering all the way from Lawful Good to Chaotic Evil. The best way to describe it is like the spokes of a bike, Good being at the top, Chaos to the right, Evil at the bottom, and Lawful being at the left.

This plane connects the inner planes to the outer planes. Typically, when one travels the Astral Plane, one isn’t using their physical form. Instead, you inhabit an astral body, which is said to have a silver string that connects you to your body back in the physical world.

Traveling to other planes via this plane means your astral form will take on a new physical form in the plane you traverse to, meaning if the land is inhospitable to your regular physical form, it is unharmed while you inhabit your new form which is created from surrounding resources within the plane you’re traveling to.

Of course, your form will likely resemble as close to as possible your regular form.

The plane of Neutral Good. A massive winding riving traverses this entire plane eventually leading out into a massive ocean. Most of the life here exists on the banks of that river, it spans the 4 layers of this plane of existence.

This realm can be home to Gods of a similar nature. The Gods that represent the good side of nature, or the ones that represent the seasons can exist here. The creatures that spend their afterlife here are protected from being summoned or controlled by other entities.

This plane represents those of an alignment ranging from neutral good to chaotic good. A three-layered plane also known as The Happy Hunting Grounds by outsiders. The inhabitants of these realms are creatures from the material world, but much more intelligent, all capable of speech, and the most intelligent are capable of even magic.

The layers consist of different biomes, never changing or affected by time.

Think of Arborea as Olympus from Greek mythology. It represents the chaotic good alignment. Mount Olympus exists here and is connected to Hades, Gehenna, Tartarus and the Material Plane. Ruled by the usual suspects (unless you decide to mix it up a little).

The elven realm and the Greek realm are separated by a massive expanse within this plane, such vast distances cannot be traveled by merely walking.

The Elven realms are lived in by the Gods Corellon and Sehanine. They are much like the Greek Realm although lean more toward the chaotic side of chaotic good.

This realm represents those between chaotic good and chaotic neutral alignments and is also home to the Norse Pantheon. This realm is home to the world tree, Yggdrasil. The massive tree also known as World Ash, has roots that span across most if not all of the planes of existence.

The most well-known Gods that reside here are Selune and Tyr.

This plane represents Chaotic Neutral. The realm is pure chaos, pockets of random elements exist all around and in various states from solid to gaseous. The realm can be manipulated and formed to give areas of safe havens for intelligent beings. Ones such as the Slaad and the Githzerai (an off-shoot of the Gith).

This realm is home to no real Gods of note, but keep in mind for a semi-powerful being living here could be easily maintained and done fairly anonymously due to the sparseness of the land.

This is another plane where it’s pretty uninhabitable for most people. It represents the chaotic neutral and chaotic evil alignments and is described as being bombarded by the wind. The wind is said to howl so loud and violent there that it slowly carves out caves and passages in the rock. So loud a person cannot hear another even if they were standing directly in front of them.

This plane has no real natives, the majority of the entities found here are typically people who have chosen to live here, or those that have been stranded, lost, or imprisoned here.

Ah, The Abyss. This is the main home of Demons in the DnD mythos. It represents the chaotic evil alignment. The Abyss is said to be endless in the number of layers it has. Each layer acts as a small self-contained world, usually with its own rules and rulers.

This realm is home to many notable creatures and figures within the various DnD lore. One of note is on Layer 88, known as the Gaping Maw, the Demogorgon dwells here, the Prince of Demons. This layer is a large ocean, with a single continent covered in jungle and marsh in the water.

Also known as Tartarus (which some might recognize from Greek mythology). This plane represents the chaotic evil and neutral evil alignments. This plane has a strange make up the top layers is said to be as big as to hold a number of world equivalent in size to the prime material plane, the layers growing ever smaller the deeper down one travel.

It is also described within each layer that there are a number of worlds, known as spheres. This means that the six layers of Carceri are pretty massive in scope.

Another plane that you may be familiar with from Greek mythology. This one represents neutral evil alignments. It is home to all manner of beings, but the lord of the daemons (not demons) Anthraxus rules these realms.

Most of the landscape here is sick and dying, no sun or moon shone, so the result is land stood still, no weather or seasons breaks up the ever still landscape. This theme continues somewhat throughout the layers of Hades, although the plant life does pick up after the first layer. One thing to note about this plane is that it contains the true roots of Yggdrasil, and the lowest layer contains the base of Mount Olympus.

This plane represents a middle ground between neutral evil and lawful evil. A bit of an interesting one here. So the gravity on this plane is actually at a 45-degree angle going anywhere means walking up the side of a steep mountain. Basically, all four layers are mountains with no base or peak, but they are almost infinite in size.

All four layers of this plane are somewhat volcanic in nature, the ground itself is said to be so hot in some layers any unprotected flammable items can burst into flames just from contact to the ground.

The inhabitants here are mostly all from other planes. Some of these folk live in towns and cities carved into the slopes themselves, but this can be quite dangerous due to the volcanic activity that can occur often here.

This one is another big one. This plane is the home of Devils. It represents the lawful evil alignment. As the name suggests there are nine layers, each with its own inner workings and inhabitants. The bottom of each layer is connected to the top of the next layer down.

A big thing to note is that the Nine Hells has housed many of the most powerful beings in the DnD mythos. Tiamat, Asmodeus, and Belial, just to name a few. This can give an indication of the kind of power structures that can exist here.

Note as well that due to it not being a chaotic realm that there is plenty of structure here. Laws, inhabitants, even large-scale cities. Unlike demons, devils do abide by some kind of code or laws.

This is another strange one. This plane represents lawful evil and lawful neutral. The reason this is an interesting one is that it’s basically these massive slabs of almost iron-like material that make up the majority of the ground. These slabs will disconnect and connect in a pattern that intelligent individuals can figure out.

The slabs function as a place of war. The spirits of the dead who died in wars and believed truly in war as an end and not a means to an end may go here when they die. Here they can participate in wars every day. When a spirit is slain in battle here, they are revived to full strength 24 hours later.

There are four layers to this plane, but probably around 90% of the inhabitants here exist on the layer known as Aviles. The one with the shifting iron continents.

Also known as Nirvana, this plane represents the lawful neutral alignment. This plane also represents order, truly. It is a single-layer plane with everything in perfect balance. Chaos and order in equal measures, the exact same amount of each element can also be found.

The entire plane is made up of gears that interconnect in various ways. Each gear has its own gravity, meaning traversing the plane can be quite strange, almost like moving around the M.C. Escher stairs, one moment you’re going straight, the next thing you know you’re walking straight up.

The main inhabitants here are the Modrons. A race of mechanical beings who work, labor, and protect this plane. There is a very rigid hierarchy here, with the most common Modrons are typically the more disposable kind, they will typically fight in the armies, serve higher tier Modrons or be laborers on the many gears throughout Mechanus.

This plane represents lawful neutral and lawful good. It is said that the trees here are special as their bark is made from precious metals, and they are never out of season. The fruit that grows on these trees is said to act like magical potions with different properties for various fruits.

One interesting thing if you’re interested in ancient Egyptian mythos is that one of the layers of Arcadia contains a shared realm that is ruled by the “Mulhorandi Pantheon” which is more or less the Gods of Egyptian lore, like Ra, Isis, and Osiris.

Also known as the Seven Heavens, this plane represents lawful good. The plane itself is a massive mountain, and each layer exists as a section of the mountain. Travelling “deeper” into this plane meant climbing the mountain.

This plane is inhabited by familiar Gods such as Bahamut, and Moradin.

Another weird one, this realm represents the lawful good and neutral good alignments. It is said that the two layers of this plane hang from one another. Meaning creatures on one layer could look up and see the creatures from the other layer.

The sky between the two layers is effectively the barrier between the two layers, which people can travel between, although it can be dangerous if not done in a controlled manner as crossing the barrier means being affected by that layers gravity, and well, it can be quite easy to fall to your death if you’re not careful when crossing between layers.

Another pretty big post, but I hope a useful one. I hope you learned at least something from it, cause I know I sure learned a little more about some of the lesser-used planes, so that’s quite cool. Keep an eye out for the next posts which will be on the specific planes themselves. However, until next time, may your day be a critical success!