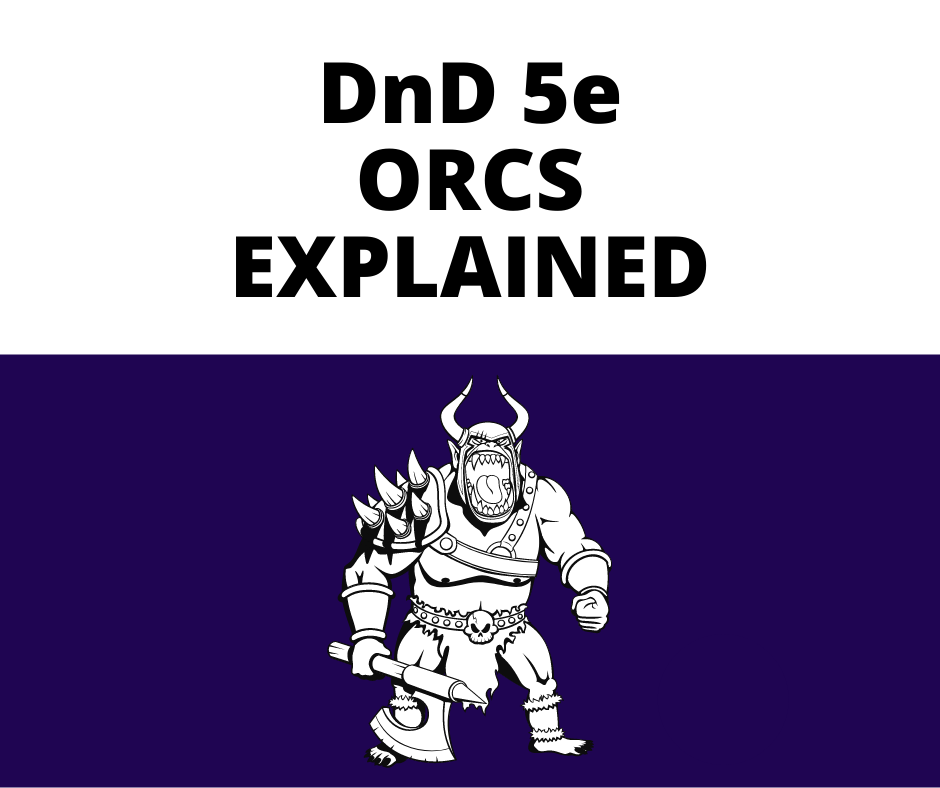 Hey folks! In today’s post, DnD 5e Orcs Explained, I’ll be going over these iconic beings in any fantasy setting. First I’ll cover what they are and what they can do, then go over how to use them in your game, I’ll also cover a little bit of the race as it stands for player characters, and finally, I’ll answer some questions surrounding them.

So ignore that blue glow coming from your sword, and get comfy, as we dive into today’s post!

The term Orc has been around a long time. The first time I’d heard of them was through Lord of the Rings, now I don’t know if Tolkien invented Orcs, but if anyone really defined them, it was him.

In DnD 5e, they’re largely described as pretty similar to the LoTR. Beings that favor might and violence. Typically working for evil forces, or at least working for their own desires.

They are said to typically be ruled by a war chief, and they follow the God Gruumsh, who is said to bless the war chiefs who prove themselves in battle.

They are distrustful of other humanoid races, if not outright hostile against them. Elves and Orcs are said not to get along, be it the warring nature of Orcs going against the passive nature of Elves, or that their Gods are opposed to one another, who really knows, and all of this is dependent on the setting you choose to play in.

In my setting Orcs are more tribal, however, they have had time to develop, and expand, so they do have towns and even small cities. Once at that stage, they had to parley with the greater powers in the world. As their survival depended on working with the other powers and not against them.

Their culture demands honor and values very heavily strength. Some Orcs actually live in humanoid cities and have forsaken Gruumsh in favor of more palatable Gods, such as Kord.

I suggest you do what you want with Orcs, if you want the typical Tolkein Orcs, go for it. I would say it’s a bit of a tired trope, and these beings deserve more of a deeper look and be given a chance to join the world at large, rather than being just enemies.

In DnD Orcs have a lot that surrounds them, this is due to them having been in the game since its inception, so their lore has just grown over time.

Typically, their main strength is just that, their strength. They are similar to Barbarians in that vein. However, due to their bloodlust, and prayer to Gruumsh, as they prove themselves, they get stronger.

A normal Orc has pretty standard attacks. They do, however, have a feature called Aggressive that allows the Orc to move up to its speed toward a hostile creature it can see, meaning they can be very quick, being able to move 30ft and then use their bonus action to move another 30ft is pretty good.

Orc War Chiefs benefit from a multiattack, and two extra features on top of standard Orcs. Gruumsh’s Fury allows them to deal an extra 1d8 damage when the Orc hits and can be used every time it hits. Battle Cry is a once per day ability where the War Chief can give advantage to attacks to all of its allies within 30ft and allows the War Chief to make a single attack as a bonus action.

There are other Orcs such as the Orc Eyes of Gruumsh, which are basically spellcasters, they also have the Gruumsh’s Fury ability and access to a number of combat and combat support spells, like Bless and Spiritual Weapon.

There are also Orog’s, which are special Orcs born with greater intelligence. These Orcs will be found leading war parties or even climbing the ranks to War Chief to lead their people with their increased intellect. They are also a little stronger than the typical Orc and have multiattack out of the gate.

There are bound to be many more entries of different Orcs, off-shoots and special Orcs, so I would explore you to go and check out all the different DnD books to find out more. These are just the typical ones.

How to use Orcs?

As I alluded to, in my campaign Orcs are no different really than any other major race. In the early days of my world, they did war a lot and were sometimes the main antagonists in what was going on in the world at that point. However, now their culture has developed, they no longer wish to pour their kin’s future down the drain. Grinding them into endless wars for little gain.

They now have matured into a society that values honor and strength. Some still cling to the old ways, but they are shunned by the War Chiefs of the current clans.

What I’m trying to say with all this is that Orcs can be used for anything, if you want them to be enemies of your party, then go right ahead, there will be Orcs that cling to those ways. Maybe you want them to be reluctant allies, this is also the case. Maybe the party has to go and get assistance from the nearby Orc settlement/town/city and appease their War Chief in order to have them help to protect against a bigger threat.

In terms of CR, they typically work well around the low to mid-levels of play. So like 3-10, of course as mentioned above, they can fit in anywhere, and can just be simply powered up to allow them to be relevant at later levels.

Okay, so players can be Orcs in DnD 5e. By default, they can be half-orcs, which is a basic race in the PHB. However, since the book Volo’s Guide to Monster came out, players can also request to be full-blooded Orcs. I’ll quickly cover each here.

In Volo’s Orcs have more or less the same stuff as a Half-Orc. The starts are the same except Full-Orcs reduce their Int by 2.

The only other thing they have above Half-Orcs is the Aggressive feature that all Full-Orcs have, which allows them to move their speed to a hostile creature as a bonus action.

They also have the Powerful Build feature which means they count as one size larger when calculating their max carry load and the weight they are able to maneuver.

Honestly, the Full-Orc race is a bit dull, I thought they would be a bit more interesting, to be honest, if a player asked me if they could be a Full-Orc, I’d tell them just to take all the Half-Orc stuff as it’s honestly just more interesting.

Half-Orcs are one of the basic races in the PHB. They may not be as exciting as some of the newer fancier races that have been introduced, but they are for sure good all-rounders, and at least from my experience, they are criminally underplayed.

Half-Orcs get 2 Str, and 1 Con out of the gate. The rest of their stuff is pretty similar to humans, although Half-Orcs don’t seem to live quite as long, but not far off it.

They get the Menacing ability, which gives proficiency in intimidation.

They get Relentless Endurance, which means when they drop to 0 HP they can drop to 1HP instead. This allows them to avoid a mortal strike but doesn’t mean they can’t be killed outright via instant death mechanics.

Finally, they get the Savage Attacks ability which means when they get a Critical Hit with an attack they get to add an additional weapon dice to the total damage of the crit. Meaning if their sword does 1d6 and they crit, they can roll 2d6.

Are Orc Playable in 5e?

Yep, they sure are. A player can choose to be a full-blooded orc or a half-orc.

What Type of Creature is an Orc in 5e?

They are humanoids. Just like Humans, Elves, Dwarfs, and the majority of the other player races.

Where are Orcs from in DnD 5e?

I’ve read they come from the Shadowfell originally, but personally, I’ve always run them as a constant in the world, similar to the other races. I typically put their race originating around the same time as the Elves, which I’d say were the first of the constant races.

Bit of a long one today, but I hope it helped you learn more about Orcs. I know I picked up a few new things that I’ll be sprinkling on my Orcs next time they show up in my games. I love the race thematically, however that could be influenced by games like Warcraft where the Orcs have a bit more personality to them, which is typically how I run my Orcs.