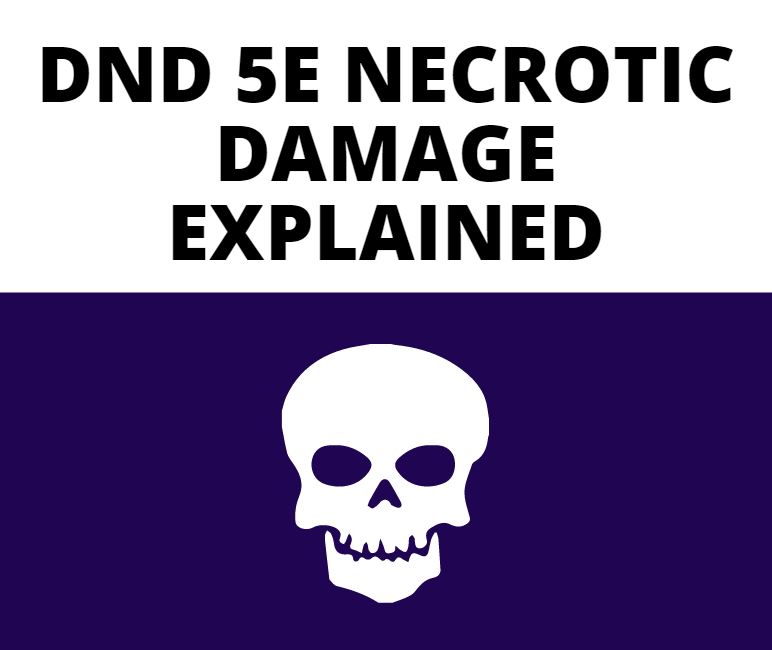 In this post, DnD 5e Necrotic Damage Explained, we’ll have a look at what way necrotic damage can show up in your games. We’ll look at some specific examples of creatures and spells that inflict necrotic damage.

Necromancy and necrotic damage in DnD are interesting, they are often vilified. This is due to them dealing with negative energy, similar to how Radiant Damage could be considered positive energy. However, both manipulate the “life” energy inside a creature, healing or harming it.

So when necrotic Damage is dealt, it drains the life essence from the creature. Almost like being able to directly attack the creature’s soul. Let’s take a look at the specific examples.

In DnD there are plenty of creatures that can cause necrotic damage. There is also a plethora of ways that it can be inflicted by a creature. Be it an innate ability the creature has, or it may be due to the nature of the creature that their physical attacks also inflict necrotic damage.

The Beholder. It’s a creature so ubiquitous with DnD that it’s on the cover of the Monster Manual. The floating meatball with eyes. These things can shoot magical rays from their eyes, depending on the ray that fires from their eyestalks. Two of which deal necrotic damage to creatures they hit.

The Death Ray and the Enervation Ray both deal heavy necrotic damage to targets that it hits. Although if the Death Ray drops its target to 0HP, it disintegrates the body. Basically instant death.

We also have creatures that because they are undead, their physical attacks also deal necrotic damage.

The Mummy creature in DnD is an undead bruiser of a creature. Its Rotting Fist attack is where it punches a target, so while doing 2d6+3 Bludgeoning Damage, it also deals 3d6 necrotic damage. This punch rocks the target to their core affecting their life energy which leaves a nasty mark.

Along with the upfront damage from the punch, if the target fails their Con saving throw then the target can no longer gain HP back and every 24 hours their HP maximum decreases by 3d6. I’d say this is due to the necrotic nature of this curse.

We also have creatures made of pure negative energy, and thus can cause necrotic damage with nearly everything they do.

Shadow Dragons are one such creature. They are dragons that have been transformed by negative energy. Thus their abilities change to reflect this.

This creature’s bite attack inflicts necrotic damage on top of the physical damage it also does. The biggest change a shadow dragon has when its transformed, at least mechanically speaking, is its breath attack.

This attack now fires out a necromantic fire. A dark black shadowy fire spews out from its mouth which can melt and warp the soul of a creature. So much so in fact, that if it reduced a creature’s HP to 0 doing this, their body disintegrates and turns into an undead creature called a Shadow.

There are a fair number of spells both ranging from low level to high level that inflict necrotic damage.

Chill Touch is one such low-level spell, it’s a cantrip which summons a necromantic skeletal hand which grips the target’s soul, dealing a small amount of necrotic damage. It also gives the target disadvantage on attack rolls, as well as preventing them from regaining HP until the start of the casters next turn.

Stronger necrotic damage spells are very powerful, being the target of one of them is always very nasty.

The Finger of Death spell is a high-level direct damage spell, which deals necrotic damage. It is a pretty high damaging spell, 7d8+30 necrotic damage. It’s a necromancy spell that I’d say shows a caster has really mastered the flow of life energy and how to manipulate it in a person.

It also has the added effect of if it drops a target to 0HP the target is raised as a Zombie under the caster’s control.

There is also spells that passively cause necrotic damage.

Hex is one of these spells. It curses a creature and gives them disadvantage on ability checks made with the chosen ability. It also causes that creature to take necrotic damage every time the caster of the Hex damages the target.

When necrotic damage shows up in games I’m part of, and I’m describing the spell or attack, I must admit I’m rather cliché. I like to envision it as mostly a dark black energy, usually with streaks of green energy. Although always read the spell or ability, then flavor it how you wish with colors and descriptions.

The actual pain aspect I normally say is along the lines of the character feeling their souls being chilled to the core. They feel weaker, frailer, closer to the end of their mortal tether.

Does Necrotic Damage kill you in DnD 5e?

The simple answer is that no, necrotic damage isn’t particularly special in DnD, it is just a damage type. It doesn’t have any additional effects just because it’s necrotic damage.

Can you heal Necrotic Damage in DnD 5e?

Yes, you absolutely can. As mentioned above, it’s just a damage type, so there is no reason that you cannot heal damage dealt by necrotic damage by way of potion or other healing spells. So unless a spell of effect states otherwise, necrotic damage can be healed like any other damage.

Are Undead Immune to Necrotic Damage in DnD 5e?

Not across the board no. There are some undead creatures that are immune or resistant to necrotic damage, but not all of them. Always be sure to check a creatures stat block for the resistances, immunities and vulnerabilities.

What does Necrotic Damage do in DnD 5e?

As mentioned above and in the post, Necrotic damage is just a damage type. Ultimately it’s a way to give flavor to certain spells and effects.

No, not always. Necrotic damage and spells are not inherently evil in DnD 5e, although they can be closely related. Necromancy in DnD 5e is more to do with the control over the life force of living things. This is why the healing spells in DnD 5e are considered Necromancy spells.

So that was our quick look at necrotic damage. Hopefully, it’s given a decent insight into how this damage type shows up in the game and how you take your descriptions of spells and attacks to the next level.

Thanks for taking the time to have a read-through of the post and until next time, may your day be a critical success!