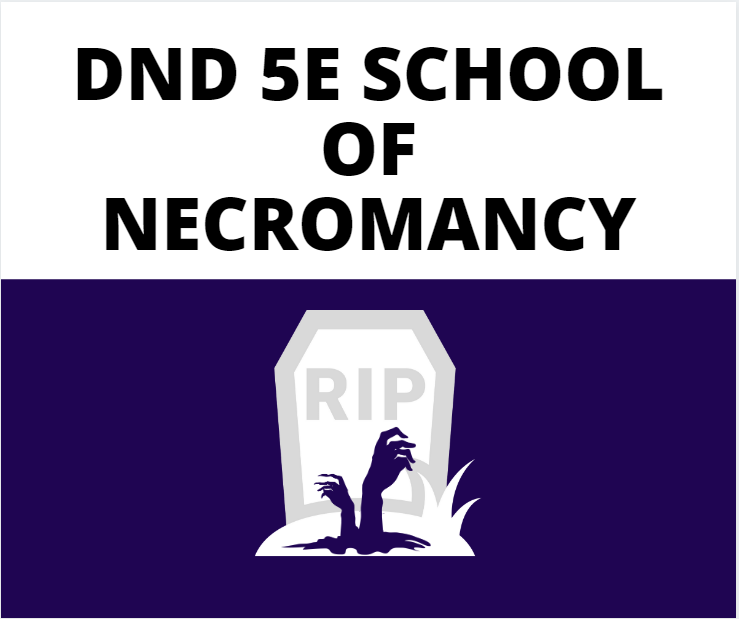 Hey everyone, so in today’s post, DnD 5e School of Necromancy Explained, we’re going to be looking at the infamous school of magic known as necromancy. As always, we’ll have a quick intro then look at some specific spells and round it out with some flavor to get your creative juices flowing.

So without further ado let’s dive right into the post!

DnD or not, most nerds have heard of necromancy or necromancers. Interestingly the term necromancy can be traced back to an ancient Greek work “nekromanteia”, “nekro” meaning dead body, and “manteia” meaning divination, or oracle.

The origin of the word is interesting because it is a very misunderstood type of magic. I see necromancy as dealing with life energy, and with life comes death, so necromancers have power over both. Not to get too deep into the DnD lore, but if you consider one of the Gods in DnD, The Raven Queen, she is the Goddess of death, neither good, nor bad.

One thing I will say is that in DnD 5e, healing magic is considered evocation magic, which seems strange to me. I figure this is to keep up the idea that necromancy is evil. I personally consider healing magic to also be necromancy.

Anyway, as it stands in DnD 5e, necromancy deals with such effects that manipulate a targets life energy or their soul. Such as harming it, healing it, bringing back or transporting that life energy or soul to or from a creature. So let’s look at some examples.

As I mentioned above, necromancy can bring life energy back to a creature, low-level practitioners of necromancy can only imbue creatures with small amounts, so this is where the “undead” come from.

The Animate Dead spell is a great example of this. The caster can imbue a corpse of a pile of bones with very little life energy, causing them to animate, and become their undead servant. The zombie or skeleton is then under the caster’s control and will obey anything the caster tells them to do for a 24-hour period, after which it will stop obeying unless the spell is recast on it. The standard spell (IE is not cast at a higher level) can allow the caster to control up to 4 creatures at a time.

However, as the practitioner of this school of magic grows in power, they can actually bring the soul of a creature back to its body, yanking it from the afterlife, giving it life anew.

The Raise Dead spell is one such version of this. It allows the caster to touch a dead creature, and as long as it’s not been dead longer than 10 days, and the soul of the creature is willing, the creature comes back to life with a single point of health. It cures all non-magical diseases, as well as poison, but not magical ones. It closes all mortal wounds but does not restore lost body parts. It also takes a toll on the creature, they suffer a -4 penalty to all rolls. This can be reduced by 1 for every long rest.

So as discussed, the school of necromancy deals with life and death energy. The practitioners of high-level necromancy tend to be clerics. It’s considered divine magic. As always when describing the spells, consider the source, is the Cleric a good-aligned cleric? Do they follow a good-aligned God? Or do they lean more neutral or even evil? These are things to consider.

The reason for this would be if you are a holy cleric, following a good-aligned God, I would be more likely to use terms like, blinding brilliant yellow light, warm glow of holy energy. Things like that. So let’s say for instance a good-aligned cleric was to cast Raise Dead on their ally after they fell in battle, this might be something I’d say.

As the calm washes over the battlefield, the victors decided, you look out to see familiar faces among the survivors. However, one is missing, a dear ally. You spend hours searching the battlefield until you find your friend’s body. Surrounded by many slain foes, your friend defiantly didn’t go down without a fight. You kneel to their side, clutch your holy symbol in your hand, and pray, as you have done many times before. You close your eyes, with one hand on the chest of your friend. You pray, as you have done many times, you ask for your God’s assistance, to bring back your friend, for their tether was cut short, they still have many feats to accomplish. For a moment you feel the winds pick up around you. For a moment you feel alone. Until a burst of bright warm light shines out from your holy symbol. The light travels from the symbol, into your hand, it flows through your arm, to your chest, and out of the hand resting gently on your comrade’s chest. It takes but a moment, but your friend lazily opens their eyes once more and their gaze locks with yours, them knowing you have brought them back from death itself.

As always I hope this post helped you understand the school of magic known as Necromancy. The role it plays within DnD is rather large I’d say, being that it controls the essence of life itself. Hopefully, the post gave some food for thought on the “evil” nature of this school of magic and how it can be misinterpreted.