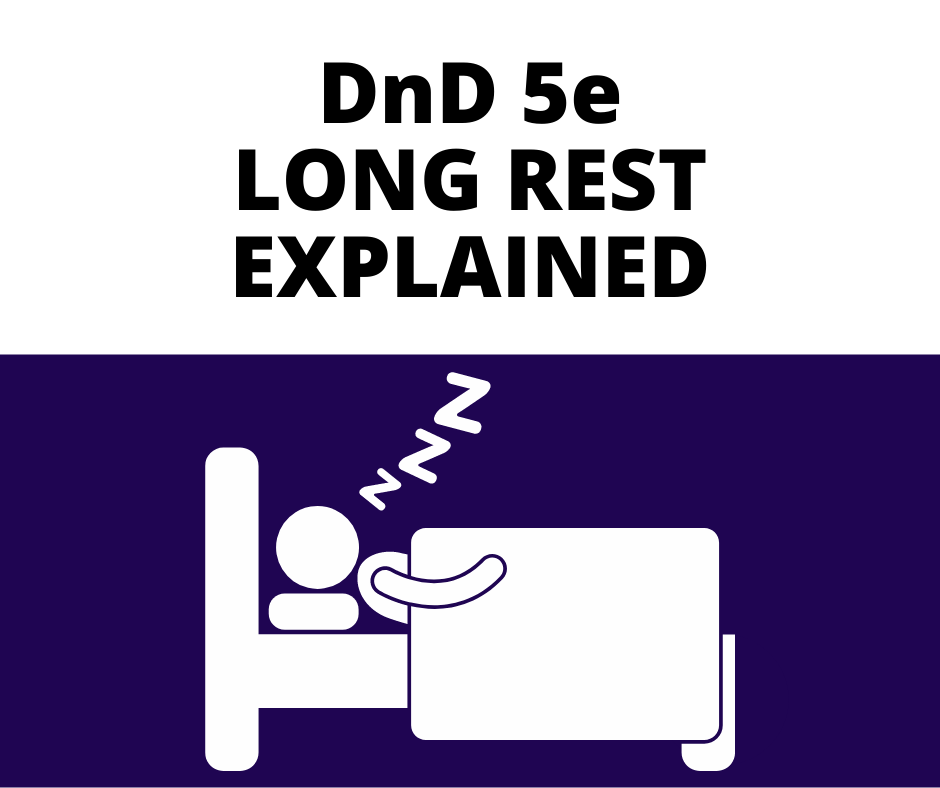 Hey folks! In today’s post, DnD 5e Long Rest Explained, I’ll be quickly going over this mechanic in DnD 5e. I’ll cover what it is, how to use it, and then answer some questions surrounding it.

So get in your PJs and get cozy in your Leomund’s Tiny Hut as we dive into today’s post!

What is a Long Rest?

In DnD 5e there are two types of rests, long rests, and short rests. As the name would suggest, the Long Rest takes up more time to accomplish. It requires at least 8 hours of sleep or uninterrupted downtime to complete a Long Rest (at least by default, there are a number of variant rules).

A long rest can also cure certain ailments as well. Although this is specific to the poison/disease/effect that’s afflicting them. Some will say it will be cleared after a Long Rest.

Last but certainly not least, a Long Rest will typically allow most magical items and abilities to recharge. Some items have charges and will typically specify that the item regains X number of charges at dawn.

How to use a Long Rest?

Obviously as a player, Long Rest when you need your abilities and HP back. However, be conscious of where and when you Long Rest as a character can only benefit from a Long Rest one in a 24-hour period. Also keep in mind that your rest can be interrupted by any activity that isn’t considered downtime, or by enemies attacking. So try not to sleep in the middle of the necromancer’s lair.

As a GM. Don’t let your players just sleep in the middle of dungeons, or to be more specific, have potential consequences if they do. 8 hours is a long time for a group to be sitting still in a room they’ve cleared out in a dungeon. At some point, you’d expect a guard or undead servant to just happen across them by accident. This is also assuming they have been somewhat quiet.

My main consequences for sleeping in a dungeon are typically one of two things. Either I have a small random encounter table for that zone, or I have the boss monster reinforce or bolster their defenses. That could mean the boss creature has more allies in the final fight or has set themselves up in a more defensible position, like using barricades and the like.

Don’t punish your players too hard, as you see in my examples, if they get attacked during the long rest, well the rest fails, and they might even start to accumulate points of exhaustion, or the rest is still successful, but the final fight is going to be much harder due to giving the boss creature more time to prepare.

How long is a Long Rest in DnD 5e?

By default, it’s 8 hours. However, there are variant rules which make Long rests last a week, and short rests are 8 hours. This can make for interesting games as it’s way more resource-intensive.

How often can you Long Rest in DnD 5e?

Once per 24 hour period.

Yep, you heal to your maximum HP after a Long Rest.

Can you take a Long Rest in armor in DnD 5e?

In the base books, you can with no penalty. However, in Xanathars Guide to Everything, there is an optional rule which makes sleeping in armor have a penalty. The penalty is that you only regain a quarter of your spent hit dice and if you have any levels of exhaustion, they don’t get removed if sleeping in armor.

As is always I hope you learned something from this post, as I know I certainly did. The main thing I want you to take away here is don’t just let your players sleep wherever they want without consequence, the places adventurers go are dangerous, and that should be reflected in any attempts to sleep in stupid areas within a dungeon/crypt/tomb or other place where one might find treasure and glory.

Until next time, I hope your day is a critical success!