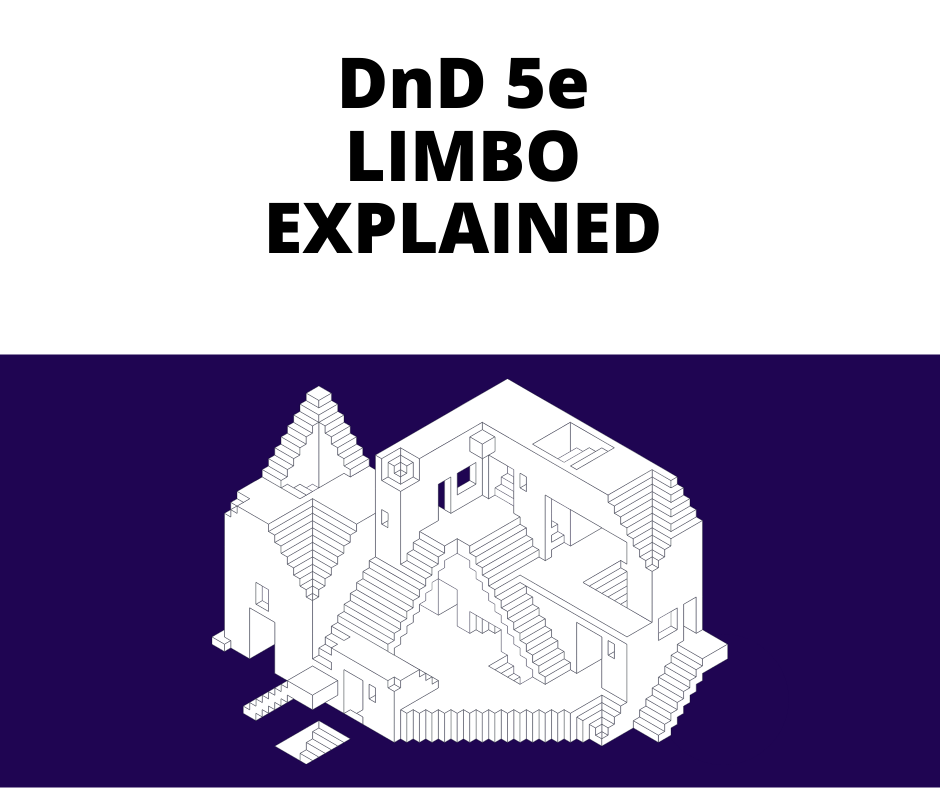 Afternoon folks! In today’s post, DnD 5e Limbo Explained, I’m going to cover the swirling chaos that is known as the Plane of Limbo. It is a very barren plane, so expect a bit of a shorter post than previous entries into this chronicle of the planes.

I hope you’re familiar with M. C. Escher as we dive into this strange plane of existence.

The Plane of Limbo is an outer plane that truly embodies Chaos itself. The plane is a mishmash of all the primary elements and everything in between. Chunks of Earth, bursts of fire, plumes of air, and waves of water freely float in this plane. There is no day or night here, therefore having your own methods of lighting the way is highly recommended, at the very least, darkvision can help.

However, Limbo has an interesting trait, anyone here can exert their will over the lands, and cause them to bend to their will. Allowing them to stitch together portions of floating debris. Doing so requires serious concentration, but as more time is spent in Limbo, the easier this becomes.

The gravity is also slightly different in Limbo. It can be affected similarly to bending the land to your will. This allows beings that are well versed in controlling Limbo to walk on what might be perceived as walls or ceilings, basically, anything can be considered a “floor” in Limbo. This allows for unique structural design for certain locations.

The primary two types of beings that can be found here are The Githzerai and the Slaadi. They both have their own locations in which they dominate, but the Githzerai are a lot more structured and refined in terms of their civilization, and footprint on this plane of existence.

The plane is Chaos incarnate, so it’s a fairly inhospitable place to exist or visit or place roots in. It takes a lot of effort to permanently stitch together areas in which to live. So the plane itself is fairly barren.

However, some beings have had the will to exist here for a long time, and have created sprawling cities, monasteries, and other permanent locations in which to live.

This is the Githzerai’s biggest city within Limbo, it is ruled by a deity-king known only as The Great Githzerai. It is not an easy life here, due to Limbo’s natural inhospitality, living spaces are tight, food is not in abundance, and life has to be rather strict in order to continue to survive here. There is said to be a fair-sized market that can contain many items both simple and wondrous.

This is one of the many monasteries within Limbo, owned by the Githzerai. Those who are inclined to test their will, follow the ways of the skilled monks of the Githzerai. This particular monastery is led by Sensei Belthomais.

This location is one of the places that has rather interesting architecture and geometry. It is built on a sphere of solid Earth that is said to be about a quarter-mile in diameter. Since the gravity here can be manipulated on an individual level, this location takes full advantage of that. Inside stairs lead to what seem to be walls and ceilings to an outside observer, but as mentioned, everything can be a floor once you learn how to change your personal gravity within limbo.

The monks here are hospitable and are happy to receive visitors, putting them up in rooms set aside for such purposes for up to a week. They are also welcoming of new recruits who wish to learn the teachings there.

This is pretty much the only location known that is permanently controlled by The Slaadi. Since they are nomadic this place clearly holds significance in their culture. This is where new Slaadi go to create new Slaadi. The clan which holds the location of the Spawning Stone (which can change due to the chaotic nature of Limbo) has the right to procreate here. The creatures fertilize each other’s eggs which can be implanted into other creatures to spawn new Slaadi. Of course, conflict can arise over who holds the location.

There is also usually a single nominated Slaadi from the clan who will stay here permanently to guard the Spawning Stone against would-be attackers. It is their job to hold the location for their clan. For it is said that if this guardian is defeated, then the Spawning Stone and its location now belong to whoever defeated the Guardian.

There aren’t that many notable beings that call Limbo home. You have to be native or extremely strong of will to exist in this plane.

These are the souls of those who believed truly in Chaos. Not many people are true agents of Chaos, typically either leaning into being good-aligned or evil-aligned, not many are considered chaotic neutral. When these beings die their souls go to this plane to become one with the Chaos of the Limbo. However, some manage to hold onto some semblance of a form and roam the plane as swirling bodies of chaotic energy.

These beings are not native to Limbo, although they have existed here for a very long time. Enough time to build a number of cities, and monasteries. They moved here to challenge themselves by living in these lands. There are typically two types of Githzerai, those who live in the cities, and those who live in the Monasteries. One thing that rings true regardless of where they live is a mantra they have “pain is weakness leaving the body”.

The walls of the cities, it is very similar to that of a typical Material Plane city, the combined ability of those who created the cities keep its gravity in check and stops them from being affected by the swirling chaos of this plane.

The monks take living in this harsh environment to the next level. The monasteries themselves are typically unaffected by the chaos here, but the land on which they dwell is not, often shifting in geographical location within Limbo the monks live a strict and difficult life, but it is said that the benefits to the soul are worth the pain.

Not much is known about the leader of Shra’kt’lor, a powerful warrior in both martial prowess and magic. They rule in an almost deified state. Since it is the sheer strength of their will that holds the city together and keeps it from being swept up by the Chaos.

They are typically found free roaming Limbo in packs of as small as two and as big as ten. They are nomadic in nature and often get into conflict with one another while hunting the plane for food. They are the only other natives known to this plane other than the petitioners. Due to this being their home plane, they have intrinsic control over the lands, able to shape it as easily as we are able to breathe.

Guardian of The Stone

A chosen Slaadi (usually the strongest) of whichever clan/gang/group are currently in possession of the area the spawning stone is currently located endlessly guards the spawning stone against would-be attackers. If the current guardian is defeated, then the victor of the battle then takes control of the area and the stone, until the next guardian is defeated. Just to be clear, the victor doesn’t necessarily become the new guardian, they are welcome to appoint someone under their control to be the new guardian.

What is Limbo in DnD 5e?

To sum up the post, Limbo is an outer plane that could be considered a physical representation of true chaos. The plane itself is a swirling maelstrom of elements. However, beings here are able to exert their will over the plane and form pathways that allow them to traverse the barren plane.

Its inhabitants are limited, the main ones being the Slaadi which are large humanoid beasts, kind of like crocodile or dinosaur humanoids, and the Githzerai, a race who moved to this plane in order to live a challenging life.

Does Time Pass in Limbo in DnD 5e?

It does, but it’s hard to track due to there being no night and day. Beings with watches or other time-keeping methods unrelated to a day and night cycle would find time runs in the same manner as the material plane.

How Many Layers of Limbo are there in DnD 5e?

The theory is that there are no layers, that it is single-layered. Although, another school of thought is that layers may exist, but are often ripped apart and moved around due to the chaotic nature of the plane.

So that’s Limbo. An interesting place for sure. Very bleak sounding, and not really a top holiday destination. However, it could be a very cool destination for a Monk looking to expand their knowledge and skill, so keep that in mind. As always, I hope you learned a little from this post. Until next time, I hope your week is a Critical Success!