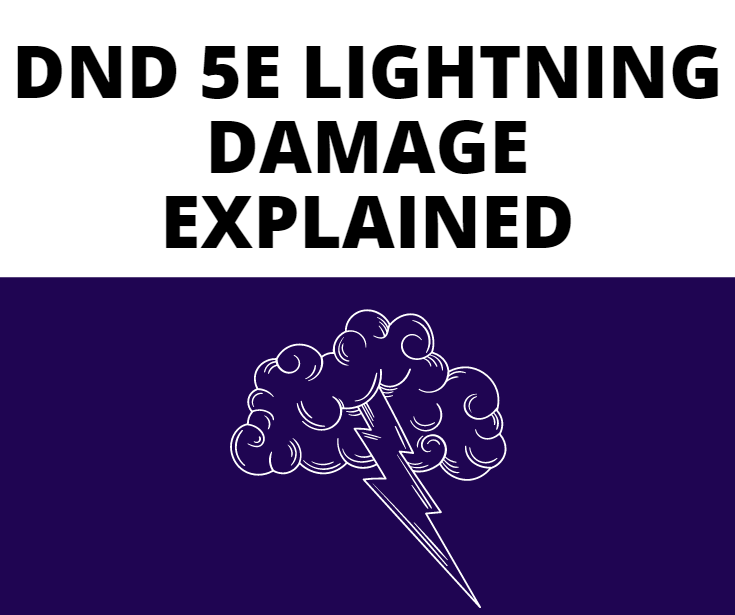 Hey all, and welcome to today’s post, DnD 5e Lightning Damage Explained. In this post, we’ll be having a gander into which way lightning damage can show up in your games. Like always we’ll take a look at some creatures that cause lightning damage as well as some spells that also cause it.

So without further ado, let’s dive right in!

It doesn’t take much to imagine sources of Lightning Damage in this game. Even just a bolt coming from the sky. Of course, failing that, there aren’t too many other natural ways to have lightning damage be inflicted.

This is where spells and creatures come into play. There aren’t too many creatures that can inflict lightning damage either, but they definitely exist, and they’re generally pretty nasty ones! Of course, we have more than enough spells that can cause it to vary pretty widely in usability and power.

Let’s look at some specifics, shall we?

In 5e, there are a decent number of creatures that can inflict lightning damage naturally. By that we mean the creature doesn’t need to cast a spell in order to use it. These creatures tend to have a natural affinity for lightning. Some are created.

The Behir. This creature is pretty awesome, it has about a dozen legs and crawls around in caverns. It’s like a giant snake that has claws so it can cling to walls and roofs of caves for ambushes. Interestingly, in the 5e lore, they were actually created by Giants to hunt dragons. Which, gives an idea of the power of these creatures.

These creatures have the ability to exhale a single arc of lightning from their mouth. If the creature fails its Dex saving throw, it takes 12d10 lightning damage.

Other creatures live in the sky, using magic to support fortresses high in the clouds. These creatures have lived alongside sources of lightning for so long that they are able to wield it as easily as humans can wield fire.

This creature is the Storm Giant. These creatures have existed long before the age of current humanoids. Once they ruled their respective planets, but now they tend to live solitary lives. Well more specifically the Storm Giants do, other giants can be a little different. Storm Giants tend to live in extremely high areas, the tip of the tallest mountain type of heights, or at the deaths of the oceans.

These creatures can more or less conjure lightning at will. They can hurl bolts of lightning at targets within 500ft of them, and if the target fails its Dex saving throw, it takes 12d8 damage.

Finally, similar to most of the other damage types, there is a dragon associated with it. These creatures can breathe lightning out and fry their foes in seconds.

Specifically, the Blue Dragon. These dragons have lightning coursing through their bodies. Which they can manifest and breathe out. The most powerful Blue Dragon, one of the Ancient verity, can breathe out a massive line of lightning. If the targets fail their Dex saving throw, they take 16d10 lighting damage.

On top of this, their bites also cause 2d10 lightning damage on top of the 2d10 piercing damage. These creatures are no joke, and should not be taken on lightly.

5e has a plethora of spells that cause Lightning Damage. We’ve tried to list a bunch of the more unique ones as a lot of the lightning damage spells are just straight up direct damage spells.

The spell Chain Lightning is an interesting one as while yes it is a direct damaging spell, when it hits the first target it can then arc from that target to 3 other targets within range. The caster of the spell may choose these targets. Each target that fails its Dex saving throw takes 10d8 Lighting damage.

Then we have lightning spells that can transform ammunition into lightning in order to give it some added benefits.

Some lighting spells speak to the shocking nature of that type of damage.

Shocking Grasp is one such spell. This little cantrip only deals 1d8 lightning damage but has a number of factors to consider. The caster has advantage to hit the target if the target is wearing any metal armor, plus if it hits, the target is unable to take any reactions until the stat of its turn. I’d say that’s down to having its “circuits” fried for a quick second. Imagine this as the prank The Joker from Batman plays on people when he shakes their hand with supped up joy buzzer in his hand

Simply put, it looks pretty much how you’d expect. However, the things to consider when you’re describing it is the sound it may make. Have you ever seen those videos where they make music using tesla coils? Basically imagine that. Of course, another example is the unlimited power scene from Star Wars, keep that one in mind too!

I like to describe it something like this, say a player cast the spell Witch Bolt and I was describing it, this is what I’d say.

As you speak the arcane words and weave your focus in the air as you have studied, you feel a tingle in your arm, like static crackling beneath your skin. You feel it surge down through your arm and into your focus. You see faint blue energy collect at the tip of the wand. An arc of crackling lightning leaps from the wand towards the target, linking you both for a moment as you fry the creature. Roll for damage

So that’s lighting damage in a sort of large nutshell, a coconut shell? Anyway, hopefully, the post helped you and gave some insight into how this type of damage comes up as well as how to describe it when it does.