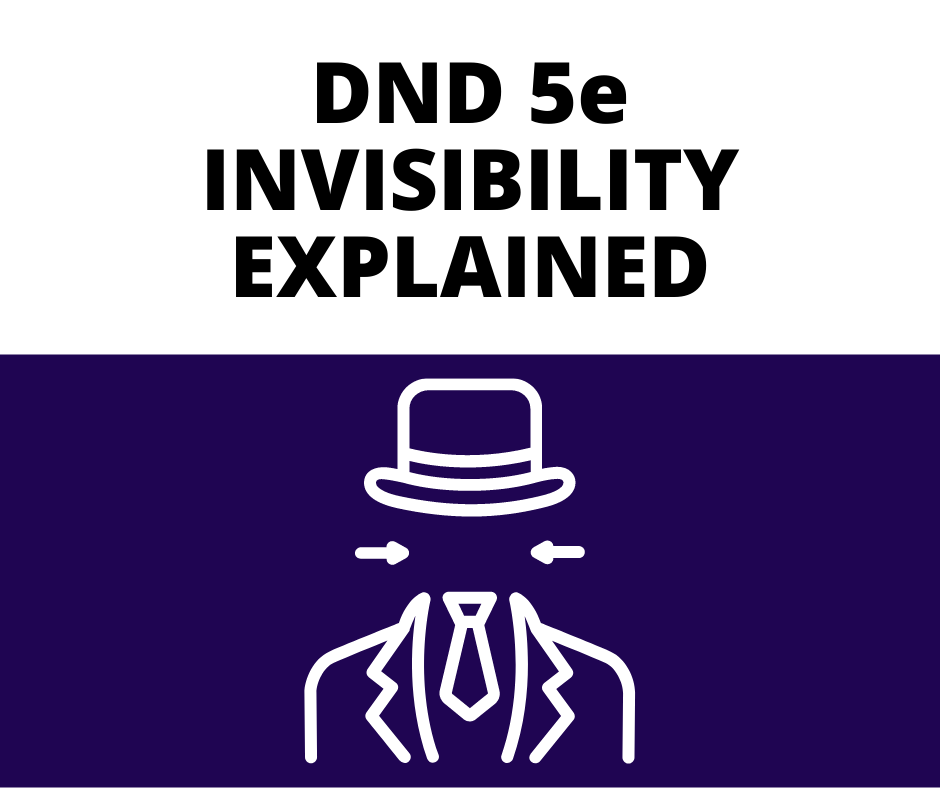 Afternoon folks! In today’s post, DnD 5e Invisibility, I’ll be going over this pretty iconic spell. As always first I’ll go over how the spell works, then how to use it in-game, and finally answer some burning questions about the spell.

So cozy up in your blanket of invisibility, strap in and let’s jump right into the post!

I don’t reckon I need to go into much detail, I feel like anyone who even has a semblance of interest in DnD would know of the concept of invisibility in fantasy.

However, just to cover all the bases here, invisibility means, to not be seen. In the fantasy sense, it usually means to become completely hidden from sight via some form of magical effect.

Specifically, in DnD 5e Invisibility is a 2nd level illusion spell. It lasts up to an hour and is also a concentration-based spell. It is cast on a target of the caster’s choice and it makes them and anything they’re wearing and carrying completely invisible.

The spell does have the caveat that if the invisible creature attacks or casts a spell they become visible again. The caster of the spell can also upcast the spell, meaning they can cast it at a higher level for additional effects. For this spell the additional effect is that it can be cast on one extra creature per spell level. Meaning if it was cast at 4th level it could be cast on 2 additional creatures.

Being that it’s a 2nd level spell, it means you gain access to it very early on in your character’s adventuring career. This means more chances to play around with the spell and use it in many different scenarios.

How to use Invisibility?

In DnD there are two main use cases that can be broken down further. Combat encounters and RP encounters. Within combat, the spell is pretty simple and straightforward. If you’re in danger or someone else seems to be in danger, make them or yourself invisible and you get to reposition and not worry too much about being attacked

Now with RP encounters there are infinite ways that you could use invisibility to your advantage, those could be, intel gathering, or stealing from a target. Even just simply getting away from the law after starting a bar fight in the city.

“The Bard, having caused trouble in the wrong bar ran down the dark rain-soaked streets of the city, the guards hot on his tail. He sees an alleyway and ducks into it. Dead end. Shit. He quickly casts his last spell for the day, and in the blink of an eye, vanishes from sight. The guards stop at the entrance to the alleyway to be met with…well…nothing. They start to scramble looking for the troublemaker. All the while, the Bard sits on a crate trying not to laugh at their pitiful attempts to subdue him.”

Can you detect invisibility in 5e?

Yep, there are numerous ways to detect invisibility in DnD 5e. There is literally a spell called See Invisibility, which does what it says on the tin. There are other things like magic items that can grant the same ability to see invisible creatures. So just be aware you’re not completely safe while invisible.

What can I do while invisible in 5e?

Basically, you can do anything that isn’t casting a spell or attacking a creature.

How useful is Invisibility in 5e?

I’d say it’s good to have in a pinch. As the later levels come in, it becomes less useful due to greater chances of running into something with True Sight or the ability to detect invisible creatures.

Does Invisibility give advantage on Stealth checks in 5e?

Strangely enough, it doesn’t. What it actually allows you to become “Heavily Obscured” which means attacks against you have disadvantage and attacks you make have advantage.

So that’s it for Invisibility. I hope you all learned something from it. It’s a cool little spell, that can have a lot of use in many different scenarios. Until next time, may your day be a critical success!