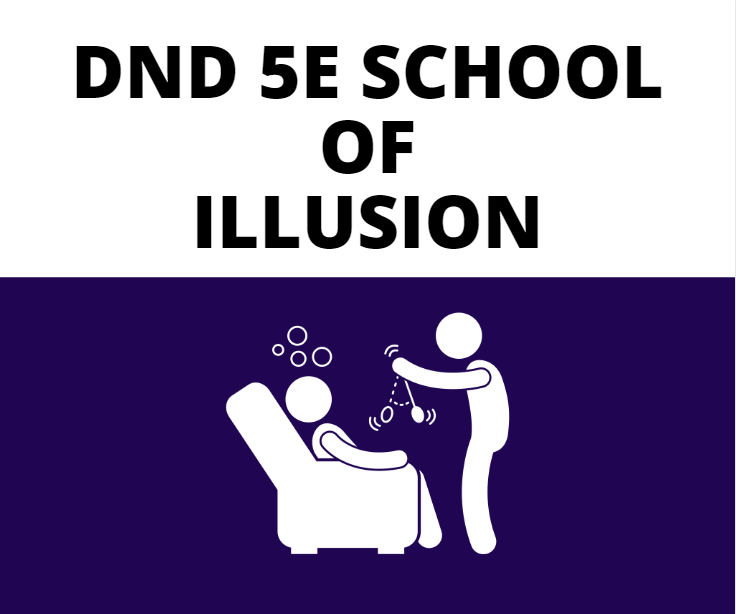 Hey everyone! In today’s post, DnD 5e Illusion School of Magic Explained, I’ll be going over the school of magic known as Illusion. First a brief intro on the school itself, then we’ll take a look at some specific examples, and finally close the post off with how I would describe Illusion magic in my games.

This school of magic is all about false appearances. Making things appear that aren’t there, or making things that are there seemingly disappear. That’s the general rule of thumb for this school. It’s a school of magic that can really reward creative uses of the spells within it. Using the spells to cause distractions or commotions can come in extremely handy when the opportunities present themselves.

It can also be used to obfuscate. Invisibility is a very well-known spell from this school. However, spells in this school can hide creatures and items from divination magic, hiding magical auras, or hiding a creature’s true type, for example, a demon masquerading as a humanoid.

As you go higher up the spell levels within this school, the illusions become more and more real, to the point where people affected by the spells actually take damage from an illusory beast’s claws because they believe it to be real.

As said above, this school can obfuscate a creature, even at early levels of magic.

Disguise Self is one such example of early level illusory magic that can hide a creature’s true form. It is somewhat limited depending on what the true form of the creature casting is. The caster needs to have the same basic body layout, so a non-humanoid creature using this couldn’t use it to look humanoid. Other than that restriction, everything else is up to the caster, a human could look like a Tiefling or an Elf. They could look like someone they’ve already met in order to gain entry to locations, the uses for this spell are limited only by the caster’s imagination and by the situations that present themselves. Another creature can discern that there is a magical effect by succeeding on an Int check against the casters Spell Save DC.

There are also spells that are higher level which can create near-perfect illusions from extremely far away.

Project Image is one such spell. This spell allows the caster to create a perfect copy of themselves (although it is intangible) from up to 500 miles away. The illusion can travel twice the speed of the caster, and the caster has full control of it as long as they are within range. The caster can speak and hear through the illusions’ eyes and ears, but cannot hear or see in their own body while doing so. A creature can work out that it’s an illusion by making an Int check against the casters Spell Save DC.

Illusion magic is interesting to describe because, for the most part, it comes in two phases. Phase one is where it is indistinguishable from what the illusion it attempting to mimic, for instance making an illusory sword on the ground, unless a creature knew it was false, as the DM, you would describe it as a sword completely.

However, there is a secondary phase that a lot of illusion magic has, where once a creature has seen through the illusion, the illusory object or creature may appear translucent or shimmer, or sound hollow as an indicator to them that, it is indeed a false image.

So let’s use an example of a villain who has access to the spell Project Image in one form or another uses this spell to mess with the main party. The description will take place from the party’s perspective.

As you walk up to the oppressive looking grey tower, supposedly belonging to the Warlock you’ve been hunting for the past month, you approach the iron-studded oak door as it slowly swings open by its own volition. You walk inside, weapons at the ready. The door slams shut, and the room lights up, sitting on a chair in one end of the room is the one you’ve been hunting. He stands up and starts to monologue, patronizingly congratulating the party on their efforts in finding him. As he drones on the party Barbarian grips their weapon so tight, blood drips from the pommel of the sword. In a blind fury, he rushes towards the Warlock and swings his sword for his head. The sword swings through the air and passes right through the Warlocks head the illusion becomes obvious as it blinks out of existence. The party Wizard recognizes that he must have cast the Project Image spell, and was never really truly there.

So I hope this post has helped you understand Illusion magic a little more and has given you an idea of how to describe it and how these spells can be used when they show up in your games. So thanks for taking the time to have a read through this post and until next time, may your day be a critical success!