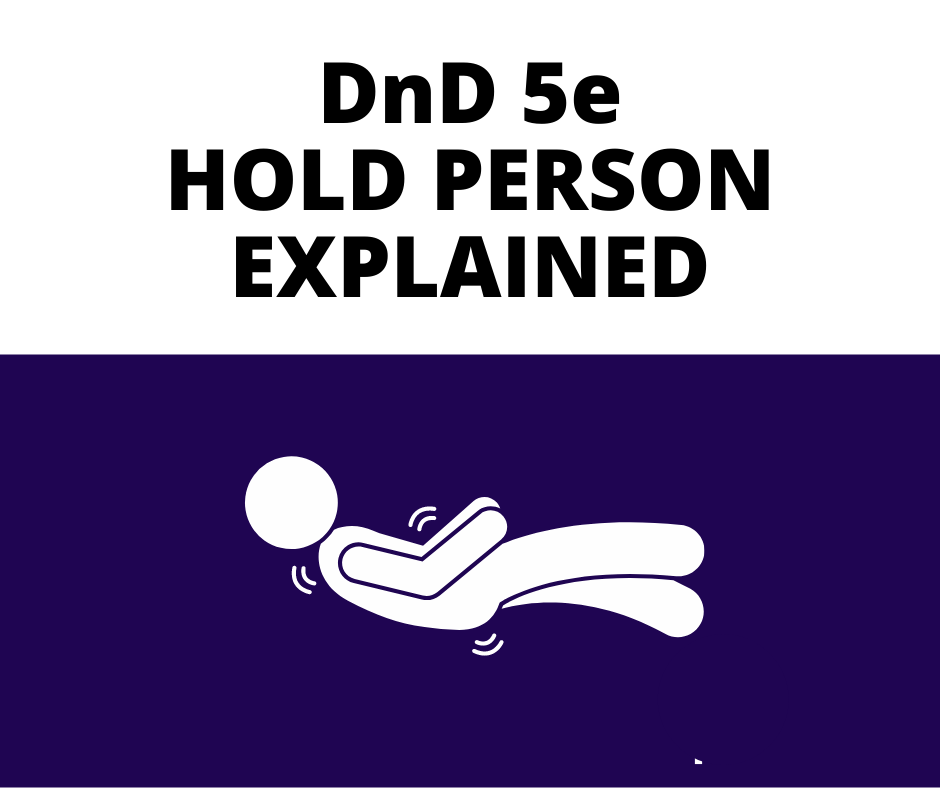 Hey folks! In today’s post, DnD 5e Hold Person Explained, I’m going to be discussing this simple spell. First I’ll go over what the spell does, then how to use it, finally I’ll answer some of the burning questions surrounding the spell.

So sit tight and prepare yourself as we dive into today’s post!

What is Hold Person?

Hold Person in DnD 5e is a 2nd level enchantment spell. It takes 1 action to cast it and can be cast on a target up to 60 feet away. It’s also a concentration spell and lasts 1 minute. Typically, only Bards, Clerics, Druids, Sorcerers, Warlocks, and Wizards have access to this spell.

It’s quite a simple spell in its scope, the caster picks a target within range, casts the spell, then the target must make a Wis Saving Throw against the casters Spell Save DC. If the target fails the roll, then they are considered to be paralyzed for the duration of the spell. However, the target is able to make another attempt to break the spell at the end of each of its turns.

It’s a decent little spell, although, the target being able to make saving throws at the end of each of its turns almost guarantees that anyone caught under the effects of the spell will rarely be under the effects for the entire duration.

How to use Hold Person

As mentioned, it’s quite basic, so really it’s just a case of picking a target that you want to be taken out of the fight for a bit and then trying to use the spell on them. Although, I would say to try and pick targets that you think will have lower Wisdom scores. This makes the spell more likely to work.

You do need to be careful as the caster, since the spell is a concentration spell, if you take damage then you must roll to maintain the concentration on the spell.

It can for sure be useful to up-cast this spell. Since for each spell level you increase the spell, an extra creature can be affected. So that means if it was cast at 4th level, it would affect 3 creatures.

It does not actually break the target’s concentration if Hold Person is cast on them. Although being incapacitated it does put them at higher risk of being hit and therefore they have a higher chance of having their concentration broken by attacks.

Does Hold Person give advantage?

It does! In fact, even more than that, it also means that any attack against them within 5 feet is an automatic critical hit.

Does Hold Person break on damage?

It does not. Certain charm spells break upon the affected taking damage, but this is not one of those spells.

I hope you learned a little about Hold Person, and I hope you can use that knowledge in your games. It’s a decent little spell that can really come in handy if you’re outnumbered, or even in RP scenarios where combat isn’t the focus. So until next time, may your day be a critical success!